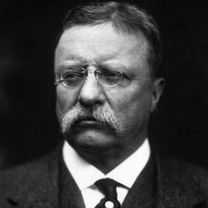 Vice-President Theodore Roosevelt visited Colorado in August, 1901.  Coverage in The Denver Times Newspaper on August 10, 1901 included the following “Editorial” about the occasion, and the somewhat surprising “Text of Roosevelt’s Brief Unplanned Speech” at the Gold Coin Club in Victor.

The EDITORIAL (reproduced below) was accompanied by a captioned photo showing numerous men dressed in suits standing in the “Shaft House, Portland Mine, No. 2, Victor, Just Before the Descent.”
​
Victor’s Welcome to Mr. Roosevelt
​    "The people of Victor are to be most heartily congratulated on their enthusiastic reception of Vice President Roosevelt yesterday.  They have shown, by the demonstration, either that Colorado has been redeemed from the rule-or-ruin reckless variety of politicians, or, what is more likely, that the insults and assaults to which Mr. Roosevelt was subjected on his visit to the gold camp last year were the work of an irresponsible few hot-headed men, who, though Americans in name were utterly un-American in principle and behavior."

"Such enthusiasm as was displayed at both Victor and Cripple Creek must have made Mr. Roosevelt’s heart beat high with pleasure.  It was also not less gratifying to Hon. A. M. Stevenson and others who were with him on his previous memorable visit.  To all of the people of Colorado, except perhaps a minute handful of men, who dishonored the state before and may not yet have repented, it is exceedingly pleasant to read that "cheer after cheer from thousands of lusty throats" greeted the distinguished American and that "ten thousand cheering men and women of Cripple Creek followed him as he went along the streets."

"Mr. Roosevelt’s visit to Colorado from the first moment that he emerged from the car at Colorado Springs, through his grandly patriotic, sturdily American and appreciatively Western address, to the hour of his approaching departure, has been a triumph for an Easterner who has grown so large that his mental stature covers all America.  To Colorado, Mr. Roosevelt will ever be a favorite son, albeit by adoption.  And from one end of the state to the other will go up glorious acclaims if he shall yet attain the highest of all earthly honors—the presidency of the United States."

Just 35 days after this editorial was published, William McKinley was assassinated and Theodore Roosevelt became President.


THE TEXT OF MR. ROOSEVELT'S BRIEF, UNPLANNED SPEECH AT THE GOLD COIN CLUB dinner at Victor was as follows:

“Fellow Citizens, Men and Women of This Giant City:  We are all good Westerners and good Americans, for all good Westerners are good Americans.  I cannot thank you too heartily for this reception.  You have a great state of mines—so great that we forget our great agricultural resources.  What we need in the Western states is irrigation.  Irrigation must and shall be.  I was told that I would not be called on for a speech, so I will not continue.  If you have enjoyed my visit a one-tenth part as much as I have enjoyed coming to your camp, I am delighted.  It is a privilege to come to your district, but it is even a greater privilege to see your women and men.  I thank you.”

LATER THAT DAY, Roosevelt attended a ceremony to lay the corner stone of the Y.M.C.A building under construction in Colorado Springs.  The Denver Times reported that Roosevelt was hoarse and recovering from a heavy cold after going on a coyote chase earlier in the week.  Consequently, the Vice-President only spoke for about 10 minutes and no text for those remarks was provided.
THE PAST MATTERS.  PASS IT ALONG.
The Next Generation Will Only Inherit What We Choose to Save and Make Accessible.
​
Please Share Your Memories, Family Connections, and Newspaper Clippings about Victor & the World's Greatest Gold Camp
By Contacting Victor Heritage Society, PO Box 235, Victor, CO 80860 or e-mail VictorHeritageSociety@gmail.com.
CLICK HERE FOR MORE MEMORIES AND STORIES OF FAMILY CONNECTIONS TO VICTOR & THE WORLD'S GREATEST GOLD CAMP.