1896 Shooting Affray at the "Union Theatre of Varieties" in Victor, CO.

​"Camborne Men in a Shooting Affray, Terrible Result of a Pistol Firing in a Colorado Theatre."  Cornish Post and Mining News, February 1896, Cornwall, UK.
Contributed by Damian R. Nance and Tony Carke
​
A dispatch from the thriving little town of Victor, Colorado says that during a performance in the Union Theatre of Varieties Mr. Smith walked down the aisle and approached a table at which four men were seated.  He spoke to one of them—Tom Pascoe—by name and accused him of being the leader of a gang of toughs who had threatened to break up the performance.  The two men lost their tempers and some hot words passed.  At last Mr. Pascoe gave Mr. Smith the lie, and, at the same time drawing his revolver, fired [illegible] shots at him, several of them passing through his chest and head.
Smith had fallen to his knees at the first shot, but from that position, fired four shots at Pascoe, one of which penetrated the latter’s heart.  Both men dropped dead to the floor, their bodies lying across each other.  Friends of the parties were by this time “taking a hand,” and the firing soon became general.
Four of the performers on the stage drew pistols and opened fire on a portion of the audience, who sent a hail of bullets around the people on the stage.  In the confusion someone turned out the gas, leaving the hall in darkness; but the artists and their foes continued firing in the dark.  The din continued unabated, while among the rattle of the shots and shouts of the combatants might be heard the shrill screams of women in the audience.
During the early part of the battle, one of the performers, a girl in tights, stood on the stage, a pistol in each hand, which she emptied into the audience as fast as she could pull a trigger.  The firing stopped after awhile, the lamps were relighted, and a horrible spectacle presented itself.  More than twenty men were lying on the floor wounded; of these three were in the agonies of death.  Many of the wounded were taken home by their friends so that it is difficult to accurately ascertain the number of injured.

Grave of George E. Smith, died 31 Dec 1895, age 34, Mount Pisgah Cemetery, Cripple Creek, Ron West photo. Graves for Pascoe and Ferguson have not been located.
Other Newspaper Accounts* of the Shooting Affray at the Union Theatre in Victor include these additional facts and perspectives:
Additional Insights About the New Mining Camp Come From the Following Letter Written by Mrs. Hattie Westover Regarding Her Visit to Victor in Early January 1896.  The letter was later published in the Greeley Tribune, January 30, 1896, where Mrs. Westover was described as a brilliant, young correspondent.

"I have been surprised in several things relating to this place [Victor, CO].  It is much larger than I expected, containing between 6,000 and 7,000 people.  There are thirteen blocks of solid business frontage with, of course, a large percentage of saloons and gambling houses ...."
"They tell me the town has been duly surveyed and laid out in town lots.  The houses, however, are set hit and miss with a seeming disregard for God or man’s laws.  Everything is new, from the houses down to children’s toys, which leads me to calculate how many families have unloaded all their old stuff on the second hand men to the benefit of the Victor furniture dealers."
"All of the houses are made level by placing them, either fore or aft, on stilts, and buying a building lot is much like buying a slice off a toboggan slide.  But there is this satisfaction--if my neighbor across the street can look down on me from lofty heights, anything in the way of trash which I may be pleased to throw out my back door goes rolling down into the front doorway of the woman who lives still lower down than I do in the alley.  Two rooms are considered an abundance for a house--the size of one’s family cuts no figure in the case.  Water is brought around in the regulation water wagon …."
"The Presbyterian and Roman Catholic churches are in the lead, already having churches.  The Methodists are erecting a church building and the others hold services wherever they can rent a hall."
"I climbed the mountain and gazed on the outside of the Independence shaft house, where millions of dollars worth of gold lie uncovered awaiting the pleasure of the owner to be taken out. Then we visited the Portland which joins the Independence, and we really did visit the inside of the shaft house and saw them hoisting every three minutes a ton of water."
"The husband of my next door neighbor was one of the three killed in a theater shooting affray the night before we got here, and what made it still worse, she witnessed the whole affair. Since coming here I have seen five funerals, but this does not argue anything against the climate as four of them died with their boots on."
"I will now tell you what I like in Victor.  I like the cheerful expression on the faces, the hurried, business-like walk that every man assumes.  I like the song of the hammer, which I never fully appreciated before.  I like the rush and roar which is almost constant, of the long freight trains, but best of all I haven’t heard anybody say “hard times”.
​ 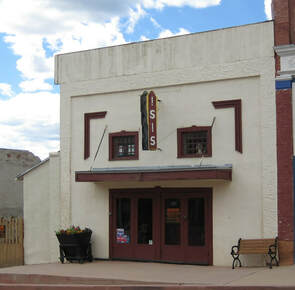 The ISIS Theater at 109 S 3rd St is the only surviving original theater building in the Mining District. It is unlikely this was the site of the infamous "Union Theatre of Varieties" on the west side of S 3rd St in 1896.
ABOUT THE CONTRIBUTORS & THE "UNION THEATRE OF VARIETIES":
​
Thanks to Damian R. Nance and Tony Clarke for sharing the newspaper account of a "shooting affray" at the infamous Union Theatre in Victor, which was published in the Cornish Post and Mining News, February 1896.  Nance and Clarke came across the story by accident while researching 19th century mining in Cornwall, United Kingdom.  Both are affiliated with the Department of Geological Sciences at Ohio University in Athens, Ohio.
*The other newspapers from which additional facts and perspectives were obtained include the Daily Morning Journal and Courier, New Haven Conn; Greensburg Review, Greensburg, Indiana; Cripple Creek Morning Times, Cripple Creek, Colo; Aspen Daily Times, Aspen, Colo; Aspen Weekly Times, Aspen, Colo; and Greeley Tribune, Greeley, Colo.
FYI--In the 1890's, "affray" was a commonly used term to describe an instance of fighting in a public place that disturbs the peace.  Today this might be described as a fight, brawl, melee, or altercation.
​     To some it might seem surprising that an account of an "affray" in an infamous Victor theater would appear in a 1896 Cornwall, UK newspaper.  But this is a reminder that in the booming Gold Rush Era miners came from all over the world, so friends and family "back home" were very interested in what was happening in the Gold Camp.  Articles about events in the Cripple Creek Mining District were also published in newspapers throughout the United States and abroad to provide information about investment opportunities in the District and the expected financial returns.
Does the "Union Theatre of Varieties" where the shooting affray occurred on New Years Eve 1895 still stand in Victor?  Research suggests that building was most likely destroyed by the Great Fire of August 21, 1899 which wiped out a large portion of the business district.  The 1896 Sanborn Maps show a "Theatre Comique" (with  "Stage & Scenery" and characterized as a "Dive") located at 407 S 3rd St.  After 1900 that location was redesignated as 125 S 3rd St due to renumbering of street addresses when the city was rebuilt after the fire.
Glimpses of the "Bawdy Side of Town" are described as follows on the Historic Walking Tour Sign at the NW corner of 3rd & Victor Avenue.
THE PAST MATTERS.  PASS IT ALONG.
The Next Generation Will Only Inherit What We Choose to Save and Make Accessible.
​
Please Share Your Memories and Family Connections to Victor & the World's Greatest Gold Camp by
Contacting Victor Heritage Society, PO Box 424, Victor, CO 80860 or e-mail VictorHeritageSociety@gmail.com.
CLICK HERE FOR MORE MEMORIES AND STORIES OF FAMILY CONNECTIONS TO VICTOR & THE WORLD'S GREATEST GOLD CAMP.