MEMORIES OF EDWARD FRANKLIN PAGE:  Watchman at the Stratton Mines and Subsequently a Mine Manager, Farmer, Retail Businessman and Banker.

EDWARD FRANKLIN PAGE (called Ed), son of Franklin A. Page, was born August 22, 1868 and reared in Hermitage [a small village in Wethersfield, Wyoming County, New York] where his father’s store was located.  He married Lucia Lenora Evans (1868-1894) of Gainesville [also in Wyoming County, New York] February 20, 1890 when they were both 22.  By 1892 they were living in Grimes, Iowa where Ed had a retail business.  There February 24, 1892 twin daughters, Lois and Loretta (Lottta), were born.  Two years later on September 9, 1894 a son, Frank was born, but within two weeks, September 24 1994, Lucia died probably from complications following childbirth, and five months later, February 21, 1895, the baby died.
Ed’s brother-in-law, Bert Grover, a medical doctor who had also lived in Grimes had moved from Grimes to Colorado Springs, Colorado because his wife, Alice, Lucia’s sister, had tuberculosis and Colorado Springs was supposed to have a beneficial climate for tuberculosis victims.  However, Alice died, leaving Dr. Grover with their small daughter.
Meanwhile in Iowa, one of the twins, Lois, developed double pneumonia and her doctor advised that she, too, be taken from the Iowa climate.  Thus in 1896 Ed’s mother, a widow, took the twins, then four years old, to Colorado Springs where she served as a housekeeper for Dr. Grover, and cared for the twins and their small cousin.
On June 21, 1896 Ed married Margaret Maude LeValley (1875-1911), sold his business in Iowa, and followed his mother and daughters to Colorado Springs.  At that time the mining industry in Colorado was booming, and for the next twelve years he was involved in mining in Colorado and Sonora, Mexico.  During those twelve years two attempts were made on his life, and once he barely escaped a lynching.
The first two or three years that Ed and Margaret were in Colorado he had a mine a few miles from a small settlement called Talifero along Goose Creek in mountainous Gunnison County between the towns of Gunnison and Powerhorn.  One period when he was working the mine, the family lived in Talifero, and on another occasion they lived at the mine itself in two cabins, one of which served as a living room and the other as a bedroom. 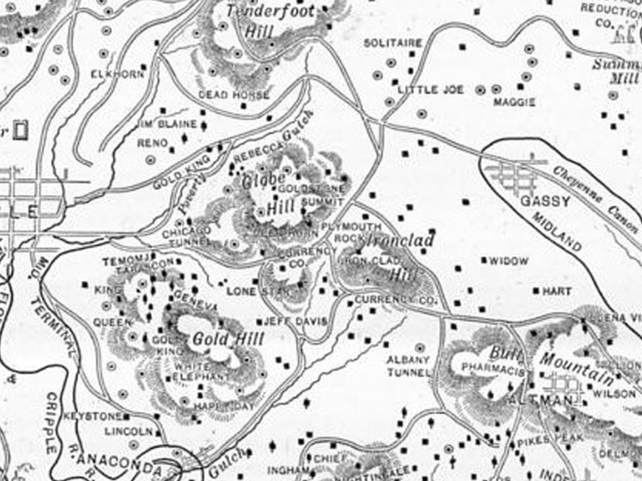 Map courtesy to LaJean Greeson shows location of Summit (northeast of Globe Hill) where the Page Family lived while Ed worked as a watchman at the Stratton Mines from 1901-03. Click to enlarge.
In 1901 they moved to Summit, located on the northeast side of Globe Hill just east of Cripple Creek, where he worked as a watchman at the Stratton Mines.  Highgrading in the mines had become rampant.  Miners were carrying highgrade ore out of the mines in their pockets or hiding it where they could retrieve it when their shift was over.  That form of theft was first started by organized crime, but was eventually practiced by nearly everyone involved in the mines, even some of the mine owners who didn’t want to share all of the profits with their stockholders.
Mr. Stratton, the most wealthy of the mine owners, hired guards, including Ed, to search the miners as they left the mines.  Ed was evidently effective as a watchman as the miners who were highgrading greatly resented him.  One day he came home from work badly hurt.  Someone had tried to kill him by loosening one of the ladders in the mine shaft.  When he started to climb the ladder, it fell down the shaft.  He struck a bar across the shaft and while it cut his head very badly it had broken his fall and saved his life.
Not long after he had recovered from the fall and started back to work, a man came to the house after dark and told him to leave immediately, that a number of miners were planning to lynch him.  It wouldn’t be safe for him to remain there even until morning.  Since the miners were a murderous lot, he decided to follow that advice and left at once for Colorado Springs.  His family followed a few days later.
When the Page family first moved to Summit their home had been a one room log house.  They didn’t live there long before they moved into a boarding house and Ed’s wife, along with a hired cook and some help from the twins, prepared meals for the miners.  During the years that Ed was working in the Colorado mines, three sons were born--Roy, Charles, and Kermit.
While the Page family lived at Summit, Lois and Lotta walked down the mountain past mine shafts and prospect holes to Cameron to attend a school taught by a teacher who came from Cripple Creek daily by train.  Lois remembered going to Cameron to pick up their books when the family made their hurried departure from the Cripple Creek Mining District.
From 1904 to 1908 Ed developed a mining property in Sonora, Mexico for a group of professional men of Colorado Springs, including Dr. Grover.  After he got the mine into production, he had to take the gold bullion to the railroad at Hermosillo across fifty miles of territory badly infested with Yaqui Indian bandits.  He always made the trip when least expected with one companion who he insisted ride in the lead, and he always rode at night as he couldn’t tell if any of his own employees, either Mexican or Indian, had contact with the bandits.
​     On one occasion the daughter of the mayor of the town was scheduled to be married, and a number of people were planning on going to Hermosillo to prepare for the wedding, including the mayor, his wife, his daughter, her fiancé and a few others.  They had arranged for a soldier escort.  Ed had agreed to accompany them, but he became uneasy when his plan to be with them became too well known, and went on ahead in his regular manner.
It must have taken two nights to make the trip as he had just gotten to Hermosillo when word was received that the mayor and all of his company had been attacked and killed and even the coach had been burned by the bandits in search of the gold.  Few if any of the soldiers were killed so it was clear that they either fled at the first sight of trouble or had been in touch with the bandits.
​     In the summer of 1908, when Ed was on vacation in Colorado, a dispute over the title to the mine was settled in a Mexican court adversely, forcing him and the company out.  The company decided that further action was useless so Ed never went back. 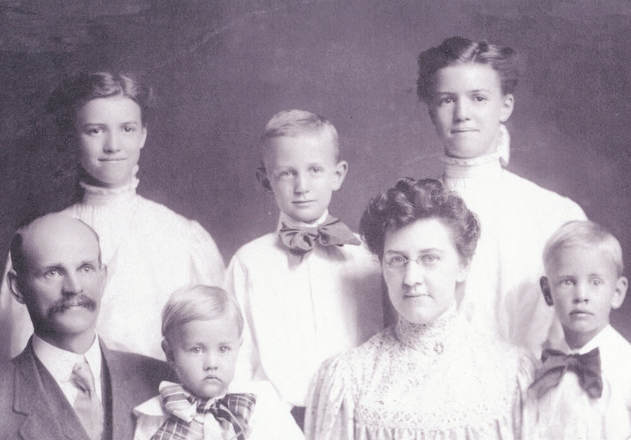 Edward Franklin Page Family, about 1908: E.F. Page and Margaret LeValley Page, second wife and mother of his three sons-- Kermit (left front), Roy (center back) and Charles (right front). Also standing in back are twin daughters, Lois (left) and Lotta (right), from his first wife (Lucia Evans Page) who died in 1895. Margaret died three years after this photo was taken.
Ed then decided to try farming although he had no experience at farming.  In 1909 he bought a small farm at Granada, a town along the Arkansas River in eastern Colorado near the Kansas border.
His wife, Margaret,  contracted typhoid fever when they lived on the farm and died October 21, 1911.  Their youngest son, Kermit, also had typhoid fever, and although he recovered from it, it left him with a condition that eventually caused his death almost 12 years later.  Lotta, too, had typhoid fever, but after a long recuperation eventually recovered. 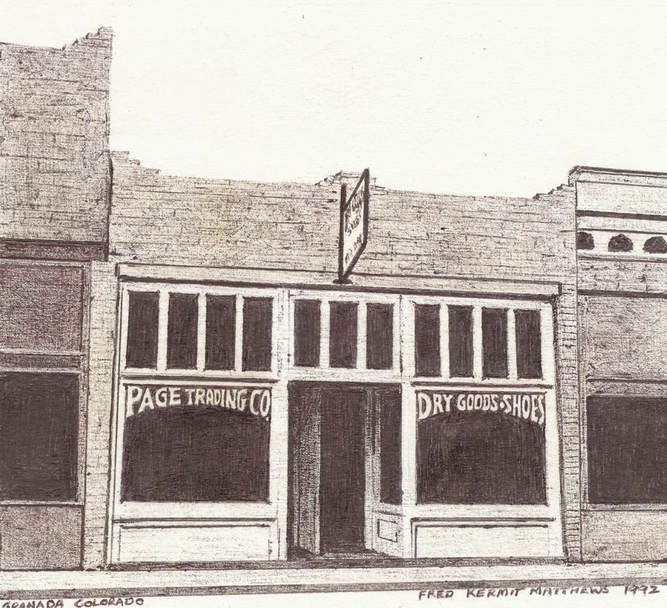 Page Trading Company in Granada, Colorado. Drawing by Fred Matthews from a photograph taken of the store in the 1940's.
In 1913 Ed returned to the retail business, establishing a general merchandise store in Granada.  He also organized the American State Bank there and served as president of its board of directors.
​     On November 7, 1916 he married Estella M. Hasselblad (1869-1947).  In his later years Ed became quite interested in the Townsend Plan, a plan designed to aid the aged and at the same time improve the nation’s economy, and he campaigned for the plan throughout Colorado.  Edward Franklin Page died in Granada, Colorado, May 3, 1941, and was buried in Evergreen Cemetery in Colorado Springs.
​ 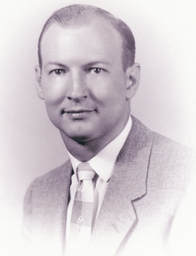 Kermit Dean Matthews--Grandson of Edward Franklin Page and author of a book about the "Matthews, Page, Wilson, Dean, Bartlet and Related Families" excerpted in this story.
MORE ABOUT THE AUTHOR & HIS FAMILY

Kermit Dean Matthews wrote this story about of his grandfather, Edward Franklin Page, who once lived at Summit (on the northeast side of Globe Hill just east of Cripple Creek) and was employed from 1901-03 as a watchman to prevent highgrading at the Stratton Mines.  Many have written about the dangers of working underground in the gold mines and the practice of miners supplementing their pay through highgrading.  This story documents the risks to those who were employed by the mine owners to prevent highgrading.
​
Kermit Dean Matthews served in the army during World War II.  He graduated from Colorado State University with a degree in Civil Engineering and worked as a Civil Engineer for Los Angeles County, California for over 30 years.  Excerpts from his 1993 book about the "Matthews, Page, Wilson, Dean, Bartlet and Related Families" provided the information contained in this story.  Kermit Matthews  passed away in 2016 at the age of 90.

Fred Kermit Matthews--son of Kermit Dean Matthews, great grandson of Edward Page.
Fred Kermit Matthews submitted this story written by his father (Kermit Dean Matthews) about his great-grandfather (Edward Franklin Page).  Fred Matthews is a Mechanical Engineer, currently working in Colorado Springs.​
​​     Fred and his wife Julie are engaged in the process of restoring a couple historic Victor homes.  Fred is also well known for his artwork featuring historic Victor structures and Mining District scenes.  His work can be found in local galleries and frequently at the annual Victor Celebrates the Arts Labor Day Weekend Show and Sale.
Fred Matthew’s grandmother, Lois, was the daughter of Edward and Lucia Page.  Lois and her twin sister Lotta attended Colorado Springs High School (currently known as Palmer High School) for a few years.  Fred and Julie’s sons graduated from there in 2014 and 2015.
Lois and her husband, Francis Arthur Matthews, farmed in Kansas before moving back to Colorado in 1947 to run the store she inherited from her father--Edward F. Page.  Fred remembers going to the store as a young child and his grandfather (Francis) gave him toy car.  Lois died in 1960 at age 67, when Fred was four years old.  Lotta, twin sister of Lois, homesteaded with her husband in Alberta Canada and lived well into her eighties.
THE PAST MATTERS.  PASS IT ALONG.
The Next Generation Will Only Inherit What We Choose to Save and Make Accessible.