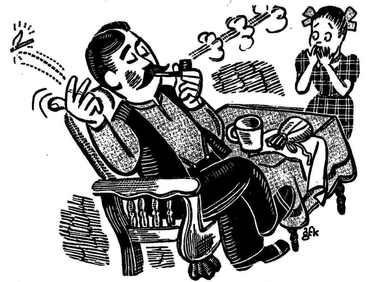 This illustration of Papa casually tossing a match after lighting his pipe accompanied Gertrude Moore McGowan's story, "Paying The Piper," when it was published in the June 1973 issue of GOOD OLD DAYS MAGAZINE.
PAYING THE PIPER:  It was't fair, but "We are women," was Mama's only comment. Childhood Memories and Lessons Learned Growing Up in Victor, Colorado in the Early 1900's.
By Gertrude Moore McGowan (1905-1992).  Published in GOOD OLD DAYS MAGAZINE, June 1973.
Submitted by Nancy McGowan Galbraith (daughter). 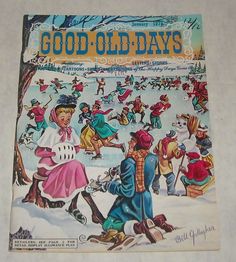 Cover GOOD OLD DAYS MAGAZINE, Jan 1973
ABOUT THE AUTHOR:
Gertrude Moore McGowan (1905-1992), daughter of Lulu and Harry Moore, grew up at 509 South Third Street in Victor, Colorado along with her brothers (Victor, Howard, Wallace, John, and Edward).  This was the setting (perhaps about 1915) portrayed in her story titled "Paying the Piper" that was later published in the June 1973 issue of GOOD OLD DAYS MAGAZINE (when Gertrude was 68).
During the time portrayed in the story, Gertrude's older half-sister (Pearl) had married and was no longer living with the family, and her younger sister (Isa, born 1920) was not yet part of the family.  Shown below are photos of the Moore family members depicted in Gertrude's story of "Paying the Piper" (Papa, Mama, Gertrude, John). 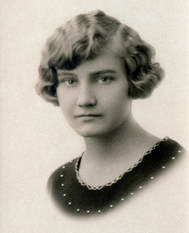 Gertrude Moore, Graduation 1923
Click this link for “Memories Lulu Ella Manson and Harry Gordon Moore”—Gertrude Moore McGowan’s recollections about how her parents arrived in Victor in the early 1890's and coped with the challenges of raising their family during boom and bust years into the 1930's.

Gertrude Moore graduated from Victor High School in 1923.  After pursuing additional education and job opportunities elsewhere, she returned to Victor to help her father in the Post Office.  While working there, she met Edgar McGowan and they married in 1933.  Click this link for Edgar McGowan’s “Memories of the Gold Rush Era in Victor—Those Who Struck it Rich & Lost It All.”

For the most part, Gertrude and Edgar McGowan raised their three children (Nancy, Elaine, and Donald) in Victor.  Gertrude was employed as a bookkeeper at the Cresson Mine office from the late 1940s until 1956 when they moved to Wyoming.  After Edgar died in 1967, Gertrude moved to California and then to Colorado Springs where she died in 1992.
Click this link for Gertrude Moore McGowan’s Recollections About Her Family and July 4th Celebrations During Her Childhood Days in Victor.

ABOUT THE CONTRIBUTOR:
Nancy Galbraith (1935-2021) left a lasting legacy to her family and others by preserving and sharing fascinating stories about  her maternal grandparents (Lulu & Harry Gordon Moore) and parents (Edgar & Gertrude Moore McGowan).  According to her children, PJ & Keith, "Mom loved Victor and got a lot of enjoyment over the years sharing memories of the place where she grew up."  In her honor, they commissioned a plaque that says "Nancy Ella McGowan Higgins Galbraith traveled the world, but her heart never left Victor."
THE PAST MATTERS.  PASS IT ALONG.
The Next Generation Will Only Inherit What We Choose to Save and Make Accessible.