Firewood For Victor, Colorado by Charles Norman Spray (AKA Jeep Hack). ©
It was the summer of 1948 when this took place, I was twelve years old.  I would become a teenager at the ripe old age of thirteen in a couple of months before the summer was out.
​ Luzzetta, Bill’s wife, like most ranch women was an excellent cook.  For breakfast we would start off with a big bowl of oatmeal cereal topped off with brown sugar and fresh cream cold from the spring house.  Then we dove into a big stack of pancakes with fresh eggs on the side.  We always had meat at breakfast—not the skimpy bacon that cooked up, but bacon sliced thick; sometimes maybe a thick slice of ham, a pork chop or maybe a beef steak.  It was a big breakfast for hungry boys and the long hard day’s work ahead of them.

Bill had a pickup with a staked-bed rack on it that we drove back up over the ridge to the higher slopes above Bison Creek where we would be working.  I remember how later in the day you could hear the Cog Trains going up Pikes Peak—click, click, click.  A workhorse was kept in a small corral by the creek where we worked.  We would put the harness on him, hook a length of chain onto the singletree and take him up the mountain.  We were ready to go to work! 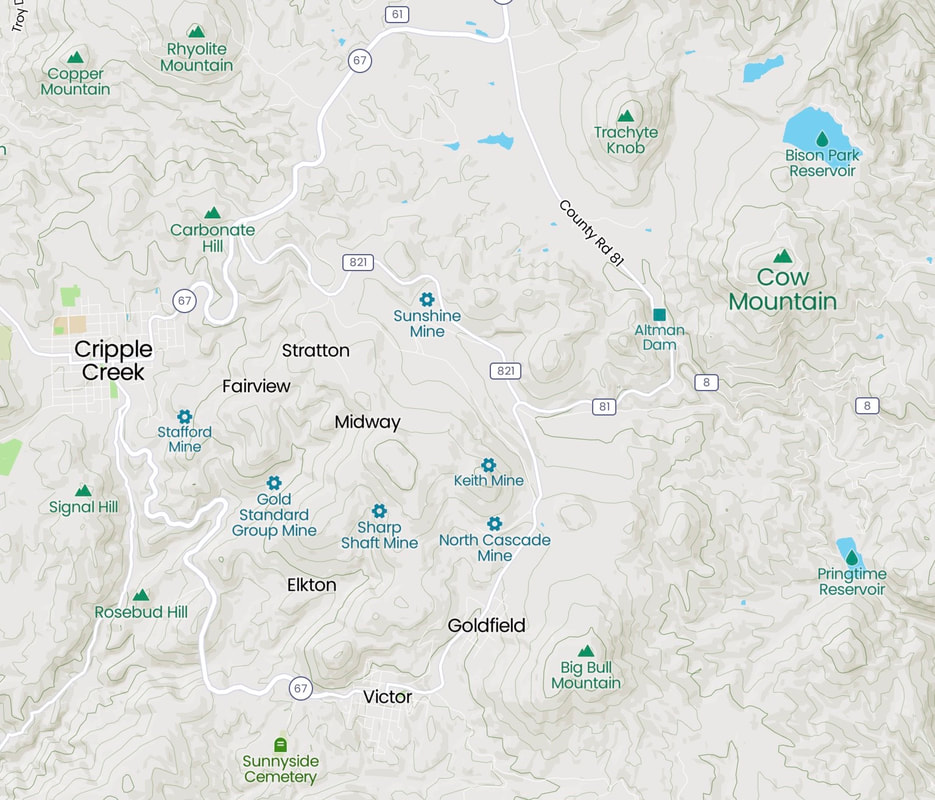 Map shows locations referenced -- Bison Reservoir, Cow Mountain, Victor, Cripple Creek, and Road 8 = Corley Highway now known as Gold Camp Road. Bill Graner's ranch was located at the foot of Cow Mountain off the Gold Camp Road.
Bill had set up an old Model T engine on the frame.  A large flat belt ran from a wheel on the engine back to a platform where a thirty-inch circular saw blade had been mounted.  At the end of each day we took the logs that had been skidded down off the mountain and sawed them up into pieces to a length that would fit in a stove firebox.  Then we stacked them in the pickup.  At the end of the day that load of wood was driven back down to the ranch where it would be transferred to a larger three-ton truck.
Long days and hard work.  At noon we’d retrieve large syrup cans that had been filled with ice-cold whole milk from the icy cold water of Bison Creek and take a short break.  The big sack of sandwiches disappeared in a hurry.
When Bill was a young man working along on the same mountain doing the same thing, he did exactly what I did.  For some unknown reason the horse spooked knocking Bill down.  His leg caught between the singletree and the trace.  His leg was crushed when the log was dragged over it.  Bill crawled off the mountain, then drove his pickup back down to the ranch, on down to the Corley, then over the many miles to the Cripple Creek Hospital where the leg was amputated.  It was providence along with a lot of intestinal fortitude that, physically injured as he was, he was able to drive a stick shift pickup at all, let along that far.  Luzetta’s story answered my question as to why Bill walked with an artificial leg.  She assured me that he wasn’t angry with me.
Returning back home at the end of the summer, I had to buy new school clothes as none of my old clothes fit me.  I’d grown up about three inches and filled out considerably.  No fat just hard muscle.  I think I ate Bill out of house and home—a hard working boy doing a lot of growing.

Bill gave me thirty five dollars and a load of wood for my summer’s work.  I really appreciated that wood as it was a lot easier to chop than the old gnarled pine pieces we’d blasted off the stumps on the surrounding mountains, stumps left by the timber cut and needed for shoring the tunnels in the early mining days.  At home it made my nightly chore a lot easier—making sure there were two stacks of wood behind all three household stoves, along with two buckets of coal by each stove.
After purchasing school cloths, my Mother gave me the extra money I needed to purchase a Winchester Model #94 30-30 Carbine.  Something I had always wanted, something that made the long hours and hard work of the summer really worthwhile!

​Click below for companion stories by Chuck Spray (AKA Jeep Hack): ​
ABOUT THE AUTHOR
To discover why Charles Norman Spray was also known as Jeep Hack by his family and friends while growing up in Victor,  click this highlighted link to his "Recollections of Life in Victor During the Great Depression, World War II and After".
Bill Graner was born Sept 13, 1904 and died April 3, 1991 at age 86.  He is buried in Victor's Sunnyside Cemetery.
​     Charles (Chuck) Spray  included this preface titled “ THE WHY OF IT ” with his more personal memoirs submitted in December 2019.  My daughter who was always telling me “Dad, write down some of the stories you are always telling me.”  But I’d continue to procrastinate.  Finally, to appease her I started writing.  The more I continued to write, the more that came to light.  Sometimes I’d worry about how to start and just how or what I wanted to say.  Then I’d remember what that renowned writer of western tales Louis L’Amour once said.  “Don’t wait for an idea.  Don’t wait. Just Write”!  He also was to have said another verbal truth, “You have to turn on the faucet before the water starts to flow”!  “Just Write”.
Bear with me.  I hope you have the time or inclination to put up with the ramblings and recollections of a world weary old man.  Perhaps in the telling I’ve stirred up a few recollections you might have of your own life.  Put them down.  Don’t wait.  Write them down for your grandchildren and their grandchildren to follow.  The children of today need to know that some things weren’t always the way they are today--things that will never be in the history books nor be taught in the schools, things that made up your life.  It’s important they know of the world you knew, what took place before I-Pods, texting, and the abuse of one of man’s greatest inventions, television.
Please forgive my grammar, spelling, punctuation and over-all abuse of the English language.  The Cherokee people have no word in their language for goodbye, so I’ll just say “Happy Trails” until we meet again.
Chuck Spray
THE PAST MATTERS.  PASS IT ALONG.
The Next Generation Will Only Inherit What We Choose to Save and Make Accessible.