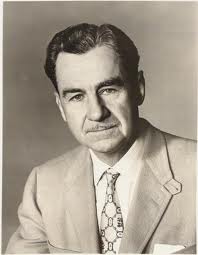 Lowell Thomas--Victor's Favorite Son
EXCERPTS FROM A TRIBUTE TO LOWELL THOMAS.
Printed in the October 1971 UNIVERSITY OF DENVER NEWS when Lowell Thomas (at age 79) was serving as chairman of the Alumni Fund.
Submitted by Richard Fay

Most people would say they had enjoyed a rewarding life if they could achieve in any one field what Lowell Thomas has achieved in several.

Author, world traveler, explorer, radio and television commentator, producer of motion picture shows, as well as “Father of Cinerama,” Lowell has been a doer ever since he came to the University of Denver campus to earn his AB in 1913 and AM in 1914.  This was shortly after he earned a Bachelor of Science and a Master’s at the University of Northern Indiana in 1911.

From Denver he went East and both studied and taught at Chicago Kent College of Law, and then on to Princeton for the dual role of graduate student and member of the faculty.  In later years he has been awarded more than a score of honorary degrees.

A profile in the New York Times called him the “voice out of everyone’s past, but also added that “he’s still a lively voice of the present” whose daily network radio program is in its 42nd year.

In his late teens and early twenties he was a reporter and editor in locations as diverse as Victor, Denver and Chicago.  From Princeton in 1916 he was sent off to World War I by President Wilson and returned with a record in film and story of all the Allied campaigns and of the German Revolution.

Then followed a speaking tour of the world which also broke all records.  In London alone, at the Royal Opera House and at Royal Albert Hall more than a million people came to hear him, including the Royal Family, the Prime Minister and both Houses of Parliament and many of the top personalities of the day as well as monarchs, military leaders and statesmen of various European countries.  After his spectacular London season he and his wife toured the world, telling the story of “The Last Crusade,” how Allenby drove the Turks from the Holy Land and adventures in Arabia.

His first book, With Lawrence in Arabia, has gone through more than a hundred editions, in many languages.  After it came fifty-three other books.  He is at work on several more.

Instead of spending most of his time on the 3,000 acre estate and lake in the Lower Berkshires, an hour and a half north of New York City, Lowell Thomas has led more than a score of expeditions and even lost track of the number of times he has circled the globe since his role as historian of Man’s First Flight Around the World in 1924.

The honors that have come to him are almost too numerous to mention, even in the world of sports where he has been elected to the Ski Hall of Fame both in the U.S. and Canada.  A mountain range has been named for him in the Antarctic and an island in the Arctic.  Two museums have rooms devoted to him--one in Ohio and one in Victor, Colorado.
Lowell Thomas’ Lifelong Ties to Victor, Colorado
Compiled from VHS archives--August 2016
Lowell Thomas grew up in Victor, attended  the Garfield Elementary School and graduated from Victor High School in 1909.
Lowell's father was one of 17 medical doctors in Victor.  A room on the second floor of the Victor~Lowell Thomas Museum displays furniture from the office of Dr. Harry Thomas as well as memorabilia from the illustrious career of Lowell Thomas.  The Thomas family moved to Victor in 1900 when Lowell was 8 years old.  While in Victor the family lived in several residences including the one at 225 South 6th Street generally recognized today as his boyhood home.  ​ 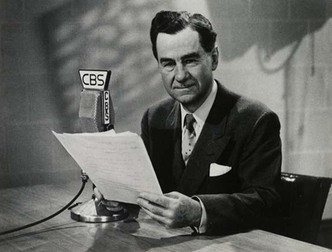 Lowell Thomas traditionally began his worldwide radio news broadcasts with "Good Evening Everybody" and signed off with "So Long Until Tomorrow".
Lowell Thomas got his start in journalism in 1911 as editor of the Victor Daily Record newspaper.  He later wrote for the Denver Post, the Denver Times, and the Chicago Evening News.

Lowell Thomas met Fran Ryan while attending Denver University and they were married August 4, 1917.  Fran and Lowell had one son, Lowell Jr., who later became an Alaskan State Senator and Lieutenant Governor of Alaska.

Lowell became a world traveler and brought the world to others--initially through his lectures and books, eventually through broadcasting and films.
​
Thomas was most famous for being in on the ground floor of radio broadcasting.  He spoke on radio for the first time in 1925 as the official historian for the first world flight.  Lowell was the first radio news commentator to broadcast for both NBC and CBS.  His radio broadcasting career lasted for 46 years and over time so many people listened that he was considered the voice of America.  He had a world-wide audience that was larger than that of the combined viewership of the major television news network anchors today.
In 1932 he became the voice of the Fox-Movietone newsreels.  In 1940, Lowell Thomas was the first television news broadcaster.  He did not stay with television very long because it limited his freedom to travel.  At the time, radio equipment was more practical to transport than television equipment.

The rise of Cinerama, a three-dimensional movie process, occurred between 1951 and 1955.  Lowell Thomas made the only three original Cinerama films--This is Cinerama, Seven Wonders of the World, and Search for Paradise.

Between 1957 and 1959, Lowell Thomas, Jr. produced his father's television series, High Adventure.  Its sponsor, General Motors, gave each show a budget of $250,000. The cannibals of the Sepik River in New Guinea were the subject of the first show.

President Gerald Ford awarded Lowell Thomas the Medal of Freedom Award on January 6, 1976.  A few months later, in Victor, Lowell Thomas announced that his last broadcast would be May 14, 1976.

For 46 years he was one of the most listened to men in America, and possibly the world.  Lowell Thomas attributed that honor to his convenient time slot on the radio, just before the Amos'n Andy Show.

Folks from Victor attribute at least some of Lowell's success to his roots in the World's Greatest Gold Camp.  Lowell also recognized this influence and throughout his career returned to Victor frequently to visit old friends and chronicle the changes time brought to the Cripple Creek & Victor Mining District.
​
In 1949, Lowell Thomas and his son visited as a guests of Governor Ralph Carr to ride on the last train over the Midland Terminal Railroad line before the tracks were torn up.  In Brian Levine's book, Lowell Thomas' Victor--The Man and the Town, Lowell, Jr. reminisced:  “As the train chugged its way slowly up through the spectacular gorges between Colorado Springs and Victor, Lowell recounted stories of working in the Empire Mine as a mucker and then a driller; of carrying ore samples by horseback from the Portland mine to the assay office in Victor.  He told about bar room brawls and an occasional gunfight, and how his doctor father had to patch up those who survived.  Through his father's eyes he saw the misery of disease among the "ladies of the red light district".  Every day the good and evil of mankind was laid out before him, particularly as he graduated from paper delivery boy to cub reporter, then to editor of the Victor Daily Record.  Throughout his reporting career, he chose to seek out the good, the positive, and the noble, leaving the seamy side of life for others to write about.”
Lowell Thomas visited Victor for the last time in August of 1981.  During this visit he gave a talk at Palmer Auditorium in Colorado Springs and spent considerable time visiting old friends in Victor and Cripple Creek.  On August 17, 1981, while attending a dinner in his honor at the Victor Elks Hall, he remarked:  “Everyone knows the name Cripple Creek.  History has given that town all the credit for the gold.  But we all know Cripple Creek is just a suburb of Victor.”    Lowell Thomas, died August 29, 1981, at his Hammersley Hill Estate in Pawling, New York--but he remains a Favorite Son of his home town, Victor, Colorado.
​
Click this LINK to access a video of Lowell Thomas visiting with other Victor & Cripple Creek Gold Camp Legends.  For more information about the illustrious career of Lowell Thomas, consider the books shown below.
THE PAST MATTERS.  PASS IT ALONG.
The Next Generation Will Only Inherit What We Choose to Save and Make Accessible.
​
Please Share Your Memories and Family Connections to Victor & the World's Greatest Gold Camp by
Contacting Victor Heritage Society, PO Box 424, Victor, CO 80860 or e-mail VictorHeritageSociety@gmail.com.
CLICK HERE FOR MORE MEMORIES AND STORIES OF FAMILY CONNECTIONS TO VICTOR & THE WORLD'S GREATEST GOLD CAMP.