Memories of Harry Louis (H. L.) Turner (1882-1967)  & His Experiences in the Early Days of the Cripple Creek Mining District.
Submitted by Dick Turner (grandson) & Ruth Stephan (granddaughter).​
Harry Louis (H.L.) Turner was born in 1882 in Alexis, Illinois.  He was raised by his grandmother after his mother died of typhoid fever when he was three months old.  Following his grandmother’s death of tuberculosis in 1887, Harry’s father and aunts shared responsibility for his upbringing.
Harry's uncle and aunt, Tom and Martha (Turner) Hood, owned and/or managed the Ruxton House/Hotel in Manitou Springs from the mid-1880's through 1891.  After his grandmother's death at the Ruxton, that also became Harry's home for several years while his Aunt Martha Hood took over his care whenever his wandering father was absent.
In early 1892, after a short time operating a sawmill near Brekenridge, ten-year-old Harry joined his father in Fremont, the settlement that eventually became Cripple Creek.  This was less than a year and a half after the discovery of gold in the Cripple Creek Mining District.  Harry did not leave the District for good until 1937.

1892--Fremont, Colorado, which later became known as Cripple Creek. William J. Gillen photo shared by Dick Turner.
In a letter written in 1959 to Leslie Spell, co-author of Forgotten Men of Cripple Creek, H. L. Turner (then age 78) recalled some of the towns he lived in during his first years in the District with some "unfiltered commentary" that provides a unique window into the early days of the Cripple Creek District.  “There were not many people in [Freemont / Cripple Creek] when I first saw it.  Certainly not many kids.  Men did not usually take their families to unproven gold discoveries in those days.  I owed my presence there to the fact my mother was dead and I went wherever my father went.”
“From Fremont, or Cripple Creek, I went to Lawrence which was a town laid out on old man Lawrence’s homestead just south of where Victor is now.  From Lawrence I went to Altman.  I was reputed to be the first kid in Altman or on Bull Hill.  I never lived in Barry or Anaconda though I knew the places pretty well.  I never had much use for either place.  I caught the town marshal of Barry taking my dog out to shoot him.  That was about 1893 and I could never understand why he should bother about shooting a dog when there were so many humans in both Barry and Anaconda who thoroughly deserved shooting at the time.”
In his early years in the District Harry helped his father and other miners with claim assessments.  Later, beginning while he was still a child, the mines he worked at near the City of Victor included the Independence, Portland, Cresson, Vindicator, Isabella, Golden Cycle, and Strong.  He also worked at ore processing mills for the Colburn-Ajax, Portland, and Independence; as well as at the Skaguay Power Plant.  His positions included underground miner, boiler room fireman, blacksmith, machinist, hoist operator, millwright, construction superintendent, engineer, and master mechanic.
Harry became a self-educated engineer and master machinist who read the classics, philosophy, and history.  Although he had less than three years of formal education, Harry wrote articles for publications including Power and Engineering Mining Journal ​(July 29, 1908, p. 433).  His schooling began in Lincoln City, a small mining town east of Breckenridge, and continued in Manitou Springs.  Having completed third grade, Harry arrived in the Cripple Creek District with his father in early 1892 where without proper clothing he did not attend school again.

Portland Complex, among the largest mines near Victor, where H.L. Turner worked at one time or another. Portland I (left) & Portland II (right). H.L. Turner photo.
​     Beginning in 1909 Harry left the District many times for work to support his growing family and to increase his knowledge and experience in mining, milling, and mechanics.  These positions took Harry, often with his family, to Kansas, Oklahoma, Missouri, Washington, Montana, and Utah to work as a millwright, construction supervisor, assayer, master mechanic, and machinist.  His Colorado positions outside the District included construction superintendent of the Cocomungo Mill in Bonanza and assayer at the Ohio Zinc Company Mill near Canon City.  Although the family always returned to Victor until most of the family left for good in 1937, only four of the ten Turner kids were born in Victor.  Anne, the oldest child, remained in Victor until late 1946 when she and her husband Parks VanDolah and their daughter Joann Payne left Victor.  Anne and Parks, a mining engineer, owned the P.B. VanDolah Assay Shop on North 3rd Street.
From 1931 to 1937 Harry owned and operated the H.L. Turner Machine Shop near Victor’s City Hall.  The business provided machining and blacksmithing services to Victor businesses using machine tools and other equipment purchased from local mines including the Vindicator, Strong, Elkton, and Independence.  The family also acquired ownership of half of Straub Mountain near Lawrence from Teller County in exchange for machining services for the County. 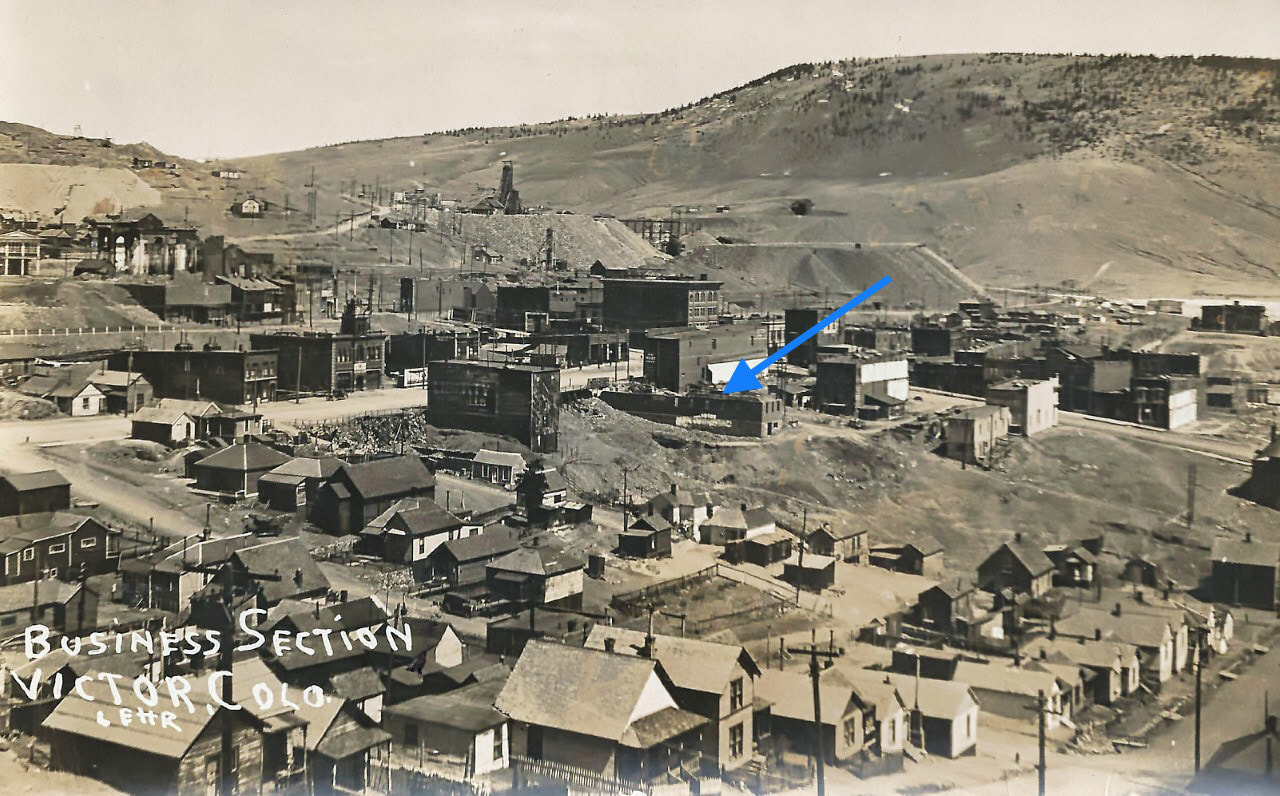 Arrow indicates where H. L. Turner's Machine Shop was located from 1931 to 1937 -- within basement foundations below street level on the south side of Victor Ave to right of Ovren's Bldg (opposite City Hall) & to left of Boston Clothing Bldg (corner of Victor Ave & S 4th St). Bill Lehr photo of Victor Business District, date unknown.
Since they frequently moved away and returned to the area, photos and other evidence can identify only some of the places where Harriet and Harry Turner's family lived in the District.  These include Goldfield (1907 photo of H.L. Turner), Victor (1915 photo of H.L Turner & children at 519 Portland Avenue, 1925 photos of children at 211 N 5th Street), Lawrence (1928 & 1931 photos of the family and their home along Wilson Creek), and lastly 1934-37 photos of the house the family built from salvaged brick that overlooked Wilson Creek with Straub Mountain in background.  Although no photos survived from their time in these locations in Victor, the family also lived at 211 S. 6th Street in 1912 and 220 Spicer Avenue in 1914. 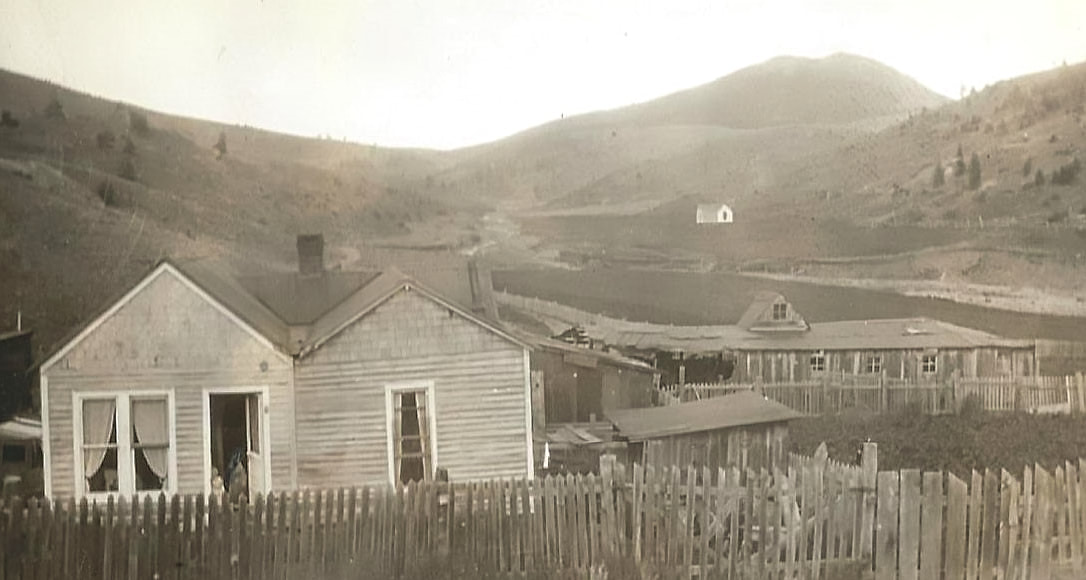 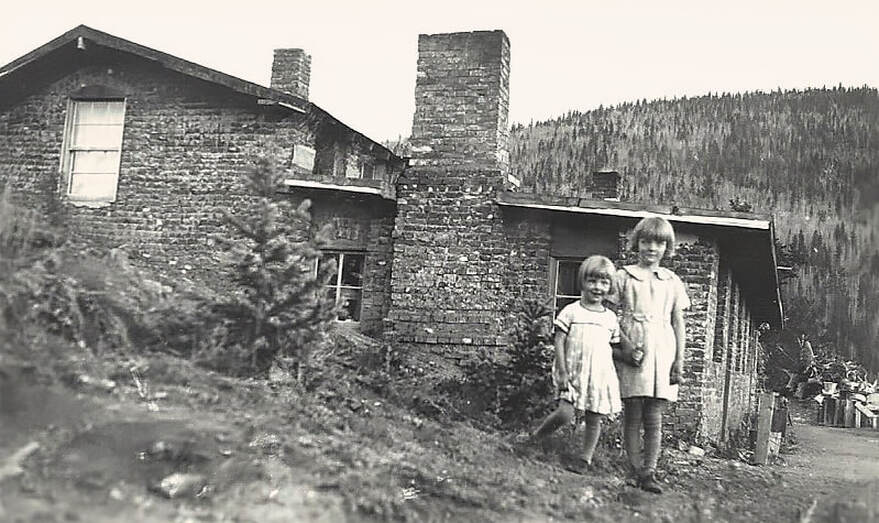 Photo of brick house which H. L. Turner took October 20, 1935. His wife, Harriet Turner, described the photo as follows: "Mary Lou 3 yrs. Lucy Ellen 6 yrs. At Turner home 1 mile from Victor, Colo, Straub Mt. in background. The yellow gold aspen leaves can be seen among the pines. Our bricks sure look 2nd hand but they are laid in cement mortar so will last. The bedrooms are uphill 5 steps from 30 ft. living room & 16 ft. kitchen." Lucy Ellen was a daughter of Harriet & Harry Turner. Mary Lou (their first grandchild, the daughter of Martha, and niece of Lucy) died about a year later of a twisted bowel.
​     A man with a restless nature and an urge to document everything he saw, Harry carried a Kodak bellows camera with him wherever he went.  In spite of the Depression and other financial constraints, Harry enjoyed exploring and sharing the experiences with his family through photographs.  The small sample of H.L. Turner photos below reflect the declining economy in Victor during the 1920's & 30's, and suggest several possible sources of the salvaged bricks the Turner family used to build their last home in the Mining District.​

Victor, Colorado with Straub Mountain in background, ca. 1935, H. L. Turner photo. The Turner family once owned half of Straub Mountain.
After leaving Victor and the Cripple Creek Mining District for good in 1937, Harry and his family owned machine shops in Livingston, Montana, Salt Lake City, Utah, and Glenwood Springs, La Junta, and Pueblo, Colorado.  In 1954 they moved to Silver Cliff, Colorado to build the Turner-Norton Mill, a flotation mill with attached machine shop and assay office.  The assay office is now in the National Mining Hall of Fame & Museum in Leadville.  The City of Silver Cliff recently acquired the mill and machine shop, including many tools originally from famous Victor mines, to complement its history museum.
In his later years Harry relished opportunities to reminisce about his time in the District as he “corrected” editors and authors in a series of unpublished letters written between 1949 and 1965.  Proud of his family and achievements, Harry remained a passionate learner, writer, and debater until his death in 1967 at the age of 85.