ADVENTURES AT THE BEAVER VALLEY RANCH WHILE GROWING UP IN VICTOR, COLORADO by Charles Spray (AKA Jeep Hack). © 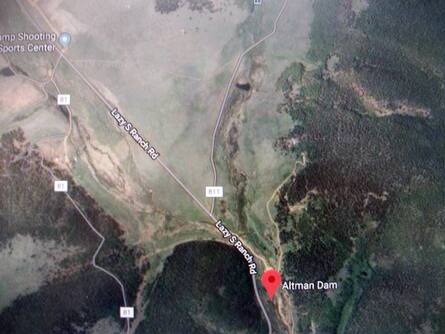 On this map the road labeled "Lazy S Ranch Road" connects from Gillett on to Goldfield & Victor, passing by the old Altman Dam (marked in red). County Road 811 is the cut-off leading to Bison Reservoir and the dark spot along this road is Eagle Eye. County Road 81 is miss-labeled--it actually follows the route labeled "Lazy S Ranch Road".
​     Last weekend I went up to visit the Victor-Cripple Creek Mining District here in Colorado where I was raised.  I wanted to see what impact legalized gambling and strip mining had been having on the area.  I found the changes awesome--some good, some not so good.

​     When driving up there I decided to take the back road into Victor where I was actually raised.  I turned off at Gillette and went down south past the little lake called Eagle Eye and the washed out remains of Altman Reservoir.  A larger lake and dam upstream that held Cripple Creek’s water supply had broke back in the 60’s and played heck with this valley. 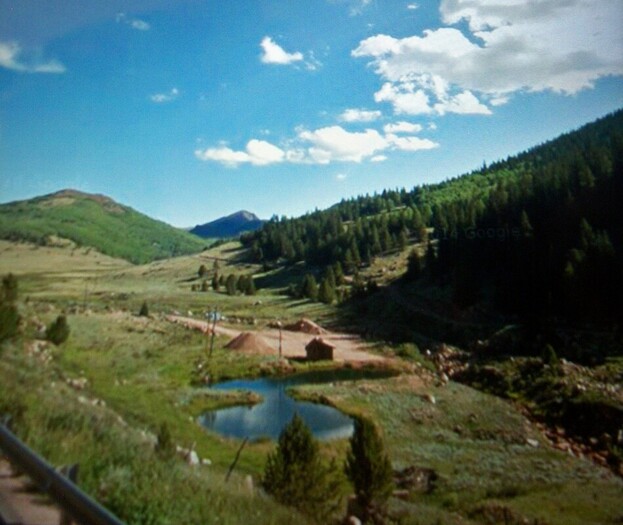 Remnants of the Altman Reservoir along the county road from Gillette to Goldfield & Victor. Photo shared by Shirley Beach.
It was in these small bodies of water called Eagle Eye and Altman that I had learned how to swim in the ice cold water fresh out of the snow banks of nearby Pikes Peak which towered above.  That I had learned how to swim was amazing.  That I survived was something short of miraculous.

Of course I was younger then and hadn’t been exposed to the luxury of hot tubs, steam rooms and Turkish Towels.  I thought everybody skinny dipped in ice cold water that turned the body a vivid shade of pink and the lips a contrasting shade of purple. 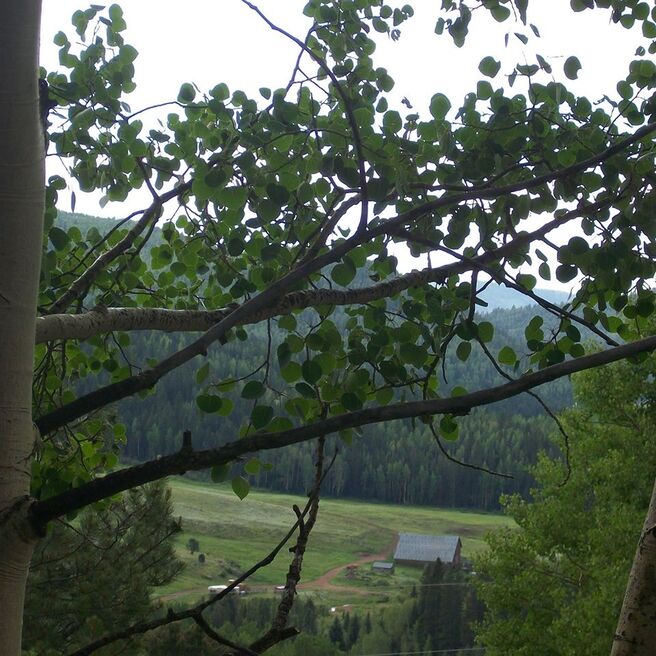 View looking down from the heights of the Gold Camp Road (once known as the Corely Road) to the Beaver Valley Ranch where the big barn still stands. Photo shared by Shirley Beach.
After a few nostalgic moments I continued my journey downstream, took a left on the Gold Camp Road which we always called the Corley, and stopped on the heights overlooking the old Beaver Valley Ranch site.

Beaver Valley Ranch was where my friend Earl lived.  The big barn is still standing.  Earl and I had many an adventure in the old barn on that ranch.  Sometimes we were rustlers hiding from the Sheriff and his Posse or maybe just cowboys rounding up the herd—all those exciting things boys of ten envision in the wonderful worlds of the imagination. 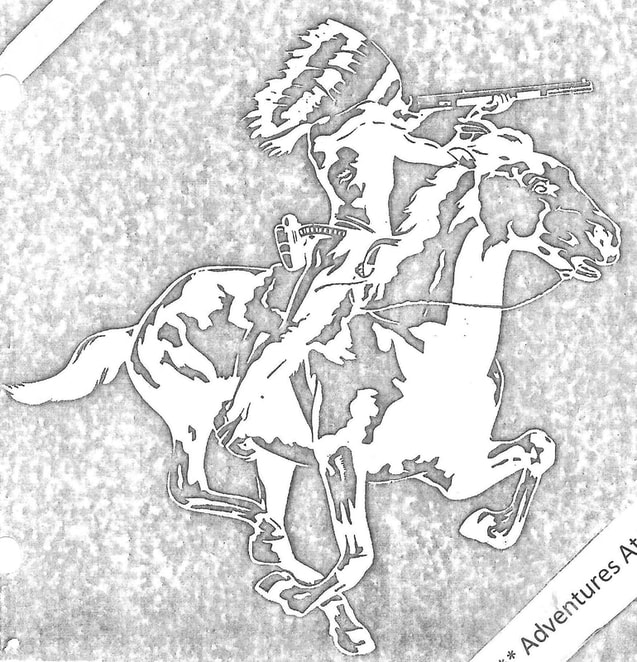 We’d saddle up in the barn by throwing a rope over a rafter above, then hoisting a saddle up so we could place it on the back of the horse standing patiently below.  We’d cinch it as best we could and then prepare to mount, Earl on his little mare “Pardner” and me on ole “Browne”.  Earl’s dad had bought Pardner at a sale at the State Fair in Pueblo--a nice little buckskin.  The only thing they forgot to tell him was that she had been used for the relay races that were so popular at fairs and rodeos in those days.  The minute that a foot hit the stirrup little ole Pardner proceeded to do what she was trained for and that was to ‘git’ and ‘git’ she did.  Ole Earl got to be real proficient at the “Flying Mount”.  But sometimes  he was left standing at the station.

Today Earl and I are bold warriors.  I say bold because the closest we could come to look like an Indian was to take our shirts off; and anybody who has ever run around at 10,000 feet altitude in the mountains with only half their clothes on knows how cool it gets when the sun ducks behind a cloud.

In the best tradition of our painted heroes and acting out the part of the last western or serial we’d seen at the “Isis” theater in Victor, we’re sitting on our noble mounts atop a ridge looking down on the unsuspecting settler’s cabin in the valley below.  Actually in reality it was Jim Cameron’s line cabin and he and crew were down there putting up hay.  Never mind, waiting until the coast was clear we’d let out our best imitation of a Comanche war cry (or maybe Apache depending on the latest movie influence), put our heels to our mounts, and swoop down on the valley and shack below.

With warrior sense keenly alert Earl and I would enter the cabin and hurriedly fill our pockets with the Hershey Miniature Candy Bars left sitting conveniently in the center of the table.  At such times both of us wished we weren’t Indians and still had our shirts on.  That way we could have had a couple more pockets to stuff candy in.  Irregardless, we pillaged (candy only) but didn’t burn anything.  Then running outside to our trusty steeds we swung aboard and with a parting war cry dashed away.

It wasn’t until a few years later and the boy became a man that it dawned on me that we woke up everybody in the valley with our blood curdling war cries, so our presence was never a secret on the days we raided the line shack.  With a smile of recollection I’d remember those Hershey Candy Bars and how they were left out in plain sight in the center of the table.

Earl – do you think they were on to us??  Happy Trails!  Jeep
"Adventures at the Beaver Valley Ranch While Growing Up in Victor, Colorado" (submitted January 2020) by Charles (Chuck) Spray (AKA Jeep Hack) ©.

​Click below to view companion stories by Charles Spray (AKA Jeep Hack):
ABOUT THE AUTHOR

​     To learn why Charles (Chuck) Spray was also known as Jeep Hack by his family and friends while growing up in Victor, click this highlighted link to his "Recollections of Life in Victor During the Great Depression, World War II and After".
Charles Norman Spray included this preface titled “ THE WHY OF IT ” with his more extensive memoirs submitted in December 2019.  My daughter who was always telling me “Dad, write down some of the stories you are always telling me.”  But I’d continue to procrastinate.  Finally, to appease her I started writing.  The more I continued to write, the more that came to light.  Sometimes I’d worry about how to start and just how or what I wanted to say.  Then I’d remember what that renowned writer of western tales Louis L’Amour once said.  “Don’t wait for an idea.  Don’t wait. Just Write”!  He also was to have said another verbal truth, “You have to turn on the faucet before the water starts to flow”!  “Just Write”.
Bear with me.  I hope you have the time or inclination to put up with the ramblings and recollections of a world weary old man.  Perhaps in the telling I’ve stirred up a few recollections you might have of your own life.  Put them down.  Don’t wait.  Write them down for your grandchildren and their grandchildren to follow.  The children of today need to know that some things weren’t always the way they are today--things that will never be in the history books nor be taught in the schools, things that made up your life.  It’s important they know of the world you knew, what took place before I-Pods, texting, and the abuse of one of man’s greatest inventions, television.
Please forgive my grammar, spelling, punctuation and over-all abuse of the English language.  The Cherokee people have no word in their language for goodbye, so I’ll just say “Happy Trails” until we meet again.
Chuck Spray
THE PAST MATTERS.  PASS IT ALONG.
The Next Generation Will Only Inherit What We Choose to Save and Make Accessible.