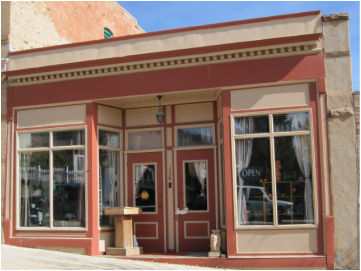 Victor was a town where shoes did not last long. The nature of the people that resided in the District and the quality of the shoe or boot assured that fact. Young folks were constantly on the move through gravel streets, over rooftops, and crawling through mounds of discarded mine waste. Within a short period of time, toes were exposed, shoestrings were shredded, and seams were ripped. The adults were no different – the very jobs they were conducting demanded rough duty for their foot ware: all day shoes were exposed to water, abrasive dust and dirt. Later in time, rubber boots were introduced and the problems were somewhat ameliorated. What does one do then with a ragged pair of nearly destroyed and unrecognizable foot ware?

What else? Take them to the miracle-working shoemaker, Mr. Mortenson on South Third Street, that tiny red-faced shop that had whirling, belt-driven polishers, steel lasts, a glorious glue smell, and a seat to wait in until the damage was rectified. Mr. Mortenson was a diminutive older gentleman who came to Victor from England. Like so many other residents, he saw a chance to fill a void in the workforce and he filled it well. He was a professional shoemaker in every sense of the word. He wore an apron, smiled with his gold tooth showing and tried to carry on a conversation while working on activity that was very complex. Mr. Mortenson stooped most of the time. One would suppose this was due to his constant bending while working on the foot ware.

The shop was no more than fifteen feet wide. On one side were the tools of his trade and on the other side a waiting area for his customers. He had a belt driven array of sanders and polishers near the wall of the work area, and in a small area near the front of the building, he had several lasts of different sizes for various type of foot ware. In the back of the shop he had a stock of many types of leather and an interesting array of nails, glue bottles, and miscellaneous supplies. His sleeping quarters and a small hotplate were behind a drape that partially covered the doorway leading to the back of the building.

On the south side of the shop were two seats from old school desks where clients could rest while emergency repairs were made to their foot wear. Most repairs were made by appointment, but in many cases there were no “other shoes to wear,” and the repair had to be made post haste. These were the days when miners were making $8.00 per day and one had one pair of those until they could not be repaired any more. This was the situation where Mr. Mortenson shined. When he apprenticed in England, he learned, not only how to repair shoes, but how to make shoes. In many cases, a pair of shoes that were repaired by Mr. Mortenson was sturdier than the originals. Most of the repairs were soles and heels, but miners were tough on their boots and steel toes and tears had to be reconstructed.

The very few young people who could say they “owned” a bicycle loved Mr. Mortenson. Victor was a destroyer of mechanical devices of all kinds including bicycles. Tires were of poor quality in those days and inner tubes did not last very long. Mr. Mortenson was a genius with adhesives and spent much of his time patching inner tubes for grateful young people who were fortunate enough to own one of these suicide machines. He charged them nothing.

People seem to remember the famous, the crooks, and the politicians and forget the people that made life bearable. Mr. Mortenson was one of those productive people for whom we should all be thankful. God rest his soul.
© Charles Clark

ABOUT THE AUTHOR:
Charles (Chuck) Clark was born in Colorado Springs, Colorado in 1933.  His father was a grocer and his mother was a teacher.  He was raised in Victor, graduated from Victor High School in 1951, and four years later graduated from the University of Colorado with a degree in English Literature and a Commission as an Ensign in the U.S. Navy.  Later he received a Masters Degree from Colorado College.
After his service obligation and becoming a pilot, Chuck was a teacher, probation officer, photographer, marketing manager and vice president of several companies.  He traveled to Peru twice and accumulated and sold numerous photographs of the Amazon and its indigenous people.  In 2011, he was elected a Member of the famed National Explorer's Club headquartered in New York city.  He is the second Victorite to gain membership in the exclusive Explorer's Club.  The first was Lowell Thomas.
Chuck recorded many of the experiences he had as a child in Victor in a 2011 book titled "Memories of a Wonderful Childhood in Victor, Colorado" -- which can be obtained from the gift shop of the Victor-Lowell Thomas Museum or ordered online.   This memory of "Mr. Mortenson -- The Victor Shoemaker" (not included in his book) was submitted in October, 2015.
THE PAST MATTERS.  PASS IT ALONG.
The Next Generation Will Only Inherit What We Choose to Save and Make Accessible.