Memories of the Ina & Henry Cleveland Hack Family by Charles Norman Spray (AKA Jeep Hack). ©
​     My grandfather was Henry Cleveland Hack (P.E.R. Victor Elks #367, Eastern Star Worthy Patron, & 3rd Degree Mason).  My grandmother was Ina Bell (Roundtree) Hack (Worthy Matron, Eastern Star; Gold Star Mother WWII).
When he was a young man in Kansas, Henry Hack worked at farming and as a fireman on the railroad.  Ina was a “spoiled” little girl whose father was an engineer on the local railroad.  The “Fireman” was working on the engine of the girl’s father when he later met, wooed and married the engineer’s “Spoiled Little Girl”.
Henry and Ina were married in Columbus, Kansas in 1908.  They celebrated their 50th wedding anniversary in 1958 at a surprise party at the Old Village Inn in Colorado Springs with most of their children and family attending.  Their marriage would last for 52 years.
The Hacks moved from Kansas to Springfield, Colorado in 1930 at the height of the depression.  In 1933 they moved to Canon City, Colorado; and then to Victor in 1935 where they kept a home for the next 39 years.
Hack Family Background
Henry Cleveland Hack was born in 1888 in Cherryville, Kansas, and died in 1961.   POPs, as he was affectionately known to family and friends, was of Cherokee Indian Descent.  His mother Mary Bell (Rogers) Hack and Grandmother Sarah (Rogers) Combs, a Will Rogers cousin, were full blood Cherokee Indian.  Sarah, as a young girl, walked the infamous “Trail of Tears” known among the Cherokee People as “The Trail Where We Cried”.  POP’s father, Andrew David Hack, was of Dutch descent.  That family traced back to Holland into the 1600’s.
Ina Bell (Roundtree) Hack was born in 1888, and died in 1974.  Her father, Robert Wicklef Roundtree, was born in early Kentucky of Mohawk Indian descent; he died in 1910.  Her mother, Mary Jane Lockyear, was born in England in 1861, immigrated to America from England as a young girl, and died in 1953.
Hack Family Children
Ina and Henry Hack had 14 children.  Two children died, one at birth and later a son (Norman) died in infancy.  The remaining twelve children, eight boys and four girls, lived to maturity.  [My sister (Cleon) and I also lived with our grandparents’ family for many years.]
​     The Hacks sent seven of their sons to serve in WWII.  One son, Victor, was killed in the war.  Ina received a kind letter from the Governor of Colorado honoring her and recognizing the family as having more sons in the service in WWII than any other family in Colorado.  Three Hack sons-in-law also served in the war.
Newspaper Photos of the Seven Hack Sons Who Served Uncle Sam During WWII Are Shown Below.
Photos (some with captions) shared by their nephew, Charles Spray.
The Hack Home at times looked like a small military base with all the coming and going.  It seemed someone was always home on leave.  One of the boys (my uncles) would always bring me a bit of military clothing.  I looked like a walking surplus store.
Henry Hack (Pops) had a barber shop in Victor before and after the war.  Later the slow economy in Victor prompted the Hacks to move to Dillon, Colorado in 1950.  Pops opened a barber shop there and one up in the newly developing mining hamlet of Climax, Colorado.  After a three year period, unhappy with the extreme cold and longer winters, they returned to their home in Victor and Pops opened up a barbershop in Cripple Creek. 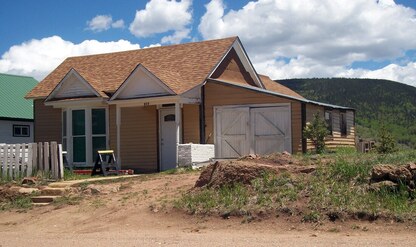 Victor home of Ina & Henry Hack, Sr. on South Seventh Street where there was always plenty of good food and a place to sleep for family and visitors. Photo 2019 shared by Shirley Beach.
The Hack’s continued to live in their Victor Home on South 7th street for the remaining years of their lives together.  With one or more of their children or some of their fifty plus grandchildren always visiting during the summer months, the Hack Home would become known as the “Go-To-Place” on South 7th street.  Ina said as a pampered child she couldn’t boil water when she was first married.  After raising such a big family, however, Ina became very much in demand for her culinary abilities at restaurants and various lodge banquets.  At home, her table was loaded with delicious food that always seemed to be in the offering—no matter to whom or how many.  Ina was in 7th heaven when she could cook for a crowd of hungry people sitting at her table.  A bed could always be found at the Hack Home.  All beds being occupied, the floor could be seen crowded with extra mattresses, sleeping bags, and heavy furniture moving pads (“can-do-beds” that took care of the demand for a place to sleep).
"Memories of the Ina & Henry Cleveland Hack Family" (submitted February 2020) by Charles (Chuck) Spray (AKA Jeep Hack). ©

​Click below to view companion stories by Chuck Spray (AKA Jeep Hack):
ABOUT THE AUTHOR
To discover why Charles Norman Spray was also known as Jeep Hack by his family and friends while growing up in Victor,  click this highlighted link to his "Recollections of Life in Victor During the Great Depression, World War II and After".
​     Charles (Chuck) Spray  included this preface titled “ THE WHY OF IT ” with his more personal memoirs submitted in December 2019.  My daughter who was always telling me “Dad, write down some of the stories you are always telling me.”  But I’d continue to procrastinate.  Finally, to appease her I started writing.  The more I continued to write, the more that came to light.  Sometimes I’d worry about how to start and just how or what I wanted to say.  Then I’d remember what that renowned writer of western tales Louis L’Amour once said.  “Don’t wait for an idea.  Don’t wait. Just Write”!  He also was to have said another verbal truth, “You have to turn on the faucet before the water starts to flow”!  “Just Write”.
Bear with me.  I hope you have the time or inclination to put up with the ramblings and recollections of a world weary old man.  Perhaps in the telling I’ve stirred up a few recollections you might have of your own life.  Put them down.  Don’t wait.  Write them down for your grandchildren and their grandchildren to follow.  The children of today need to know that some things weren’t always the way they are today--things that will never be in the history books nor be taught in the schools, things that made up your life.  It’s important they know of the world you knew, what took place before I-Pods, texting, and the abuse of one of man’s greatest inventions, television.
Please forgive my grammar, spelling, punctuation and over-all abuse of the English language.  The Cherokee people have no word in their language for goodbye, so I’ll just say “Happy Trails” until we meet again.
Chuck Spray
THE PAST MATTERS.  PASS IT ALONG.
The Next Generation Will Only Inherit What We Choose to Save and Make Accessible.