MEMORIES OF MR. & MRS. AXEL OLSON
By KC Garver
Mr. and Mrs. Olson (Betzi and Axel) were our next-door neighbors as were Bob and Shirley Beach.  Shirley is the Olson’s daughter.  I have fond memories of my summer vacations; Mr. Olson is in many of them.  I don’t remember Mr. Olson first-hand in my early years, but my Dad had an 8mm movie camera and I remember seeing Mr. Olson in the videos playing with his grandchildren in their front yard, smoking his pipe while sitting in a lawn chair, or chatting with other adults while we were having a cookout.
Mr. Olson came to America from Sweden, so his “v” and “w” was sometimes interchanged when he spoke.  One of the first stories I remember my Dad telling us about was a conversation he had with Mr. Olson, who was talking about wolves and cold weather.  My Dad was surprised to learn there were wolves around Victor, and confused as to why the wolves would freeze in the winter.  Mr. Olson was actually telling a story about how the water valves froze.  He pronounced “valves” as “walves” and my Dad thought he was saying “wolves”.  Mr. Olson was a storyteller, many of his stories started with, “Velllll, I’ll tell ye” as he took intermittent puffs on his pipe.  The “Well” had a faint “v” sound.
I loved hearing Mr. Olson’s stories, but heard them in my pre-teen and early teenage years 45-50 years ago.  The accuracy of the stories may be questionable based on my childhood imagination, retentive abilities, the number of years that have passed and Mr. Olson’s ability to embellish.
Mr. Olson and his brother were supposed to come to America on the Lusitania in 1913, but they got bumped and had to make the trip on a cattle boat.  They soon found their way to Kansas after becoming separated for a short time and one of his jobs was cutting firewood that winter.
Hedge trees were planted in Kansas to break the wind around the farmhouses and for soil conservation.  The hedge tree, Osage Orange, is extremely dense and burns very hot, so is desirable for firewood.  Its density makes it difficult to cut with a chain saw, let alone an axe and whatever handsaw was available in the early 1900’s.  The sap freezes solid, which exacerbates the chore of cutting hedge trees in the winter.  And this was how Mr. Olson was introduced to the hedge trees in Kansas.  Mr. Olson was a dedicated hard-working man and I’m sure he gave it his all.  But those frozen hedge trees really made an impression on him and he related the story to me on several occasions.
I remember sitting in lawn chairs with Mr. Olson on the mountainside in front of our cabin and listening to him talk about mines, rocks, and the gold.  He also showed me a few gold and fool’s gold specimens he had collected through the years.  I don’t remember specifics of stories he told about the different mines he worked in, but I was mesmerized by his tales of life in the mines.  He taught my Dad, sisters, and me what kind of rocks have gold in them and how to break them open to discover the hidden treasures.
I don’t remember talking with Mrs. Olson, but I think I remember she always had beautiful flowerbeds and flowerboxes, she always wore an apron over her dress, and I remember her baking things in her bright yellow wood cook stove.  She seemed to be the embodiment of the word “grandma” to me back in the day. 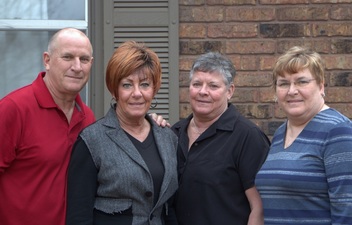 KC Garver and his sisters--Julie, Ardis Ellen, & Karen, 2015.
​​ABOUT THE AUTHOR:
​     KC Garver was born in Wichita, KS in 1956.  He visited Victor, CO on a family vacation in 1961.  His parents, Ardis and Ken Garver, bought a log cabin on N 6th Street.  He vacationed in Victor every August for most of the next 20 years and helped refurbish the old cabin.  The cabin is still in the family and used frequently through the summer months.
KC has two children and six grandchildren who live in Kansas, where he lived for 50 years.  He also lived in Seattle, WA and is currently in Charleston, SC.  He works at the Boeing Commercial Airplane Company as a Facilities Planner, he has been with the company for 30 years.  He has an MS in Management and taught Master level classes at Friends University, Wichita, KS while working at Boeing.
​     KC enjoys bike riding, hiking, and other outdoor activities where he gets to sharpen his landscape photography skills.  He also enjoys craft beers and supports local and traveling musicians at breweries and other music venues around the Charleston area.