Sports in Victor, Colorado & Memories of the 1949 Pikes Peak Junior High School Basketball Tournament by Charles Norman Spray (AKA Jeep Hack). ©
The two major sports we played while I was growing up in Victor were Baseball and Basketball.  Baseball was played down on the Gold Bowl Field and Basketball up on the Auditorium Court (originally the second-story ballroom and offices for the Western Federation of Miners Union Hall constructed in 1901).  Some hotly contested half-court dirt ball games were also played below the hoop hanging on the Cox’s back porch (near the hockey rink today).  We wore out a lot of basketballs playing on the dirt over the years.
Our Auditorium ball court was a first class facility as were Cripple Creek’s, Monument, Fountain and Cheyenne Mountain.  We played Woodland Park just for practice as they were young and just starting to grow up.  We played in an airy old barn down in Penrose and the court in Manitou was the Stage having a net hanging down from the ceiling to the edge of the stage between the game and the spectators.  It served its purpose keeping the ball in play and preventing it from bouncing out into the crowd.

Our Sixth Grade team in Victor (see photo below) was undefeated.  We grew up playing together and handling a basketball. 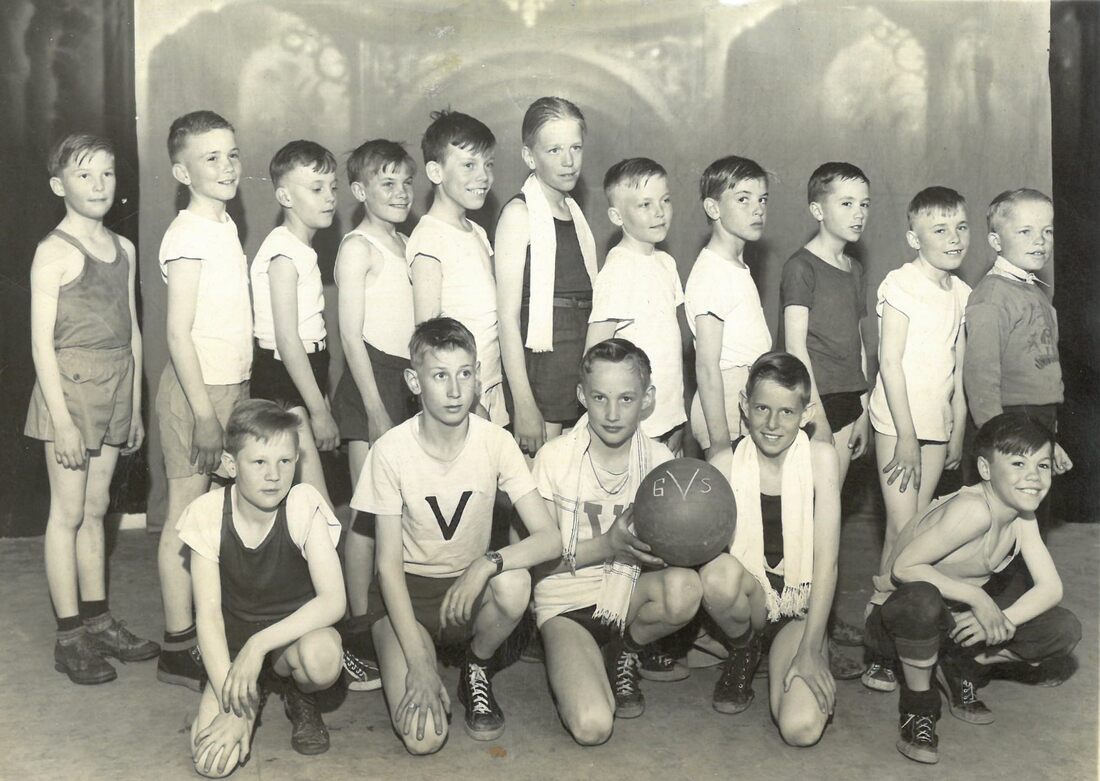 Undefeated Sixth Grade Victor Basketball Team in 1947. Photo shared by Charles Spray (AKA Jeep Hack). Front row (left to right): Raymond Cox, John Saulsbury, Jeep Hack, Raymond Martin, Warren Gingrich. Back row: Pete Jones, _____, Ken Clark, Clarence Wilson, _____, Merle Hildreth, _____, _____, _____, Keith Clark, Jack Lorenz. [Email VictorHeritageSociety@gmail.com to help identify team members in the back row.]
​ By the time we were in the Eighth Grade we were very good and bested all opponents during the regular season.  With the regular season over in 1949 we entered  the "Pikes Peak Junior High School Basketball Tournament” to be held in Fountain, Colorado.  Through the process of elimination we found ourselves facing Cripple Creek for the tournament championship.  We had readily defeated them in two games held during the regular season.  For various reasons a different contest would be held on this court, this night.
Going out onto the floor to play the game we thought our Coach Bob Elliott had lost his mind!  He told our first team (me included) to stay on the bench, putting the second team into the start of the game.  Confused, angry with some blubbering and sniffling we sat on the bench and watched Cripple Creek amass a big lead in the game.
Half time found a disgruntled team file into the locker room.  When the Coach got us quieted down and got our attention he gave us the following “Pep” talk.  I remember he said “Listen up.  I’m very, very proud of you guys.  You’ve used your talent, ability, courage and the real desire to win.  You’ve played as a Team and teamwork has brought you to this place, the here and now.  You’ve walked all over any one who contested you.  You’re Good!  Very Good!  Now let’s find out how Really good you are.  Now go out there and win this tournament."
We went out and faced a fired up Cripple Creek Team.  We whittled away at their big lead and with a couple of minutes left in the game the ball was passed to me.  As a Guard, I drove in to make a layup shot and was fouled.  Not the best foul ball shooter but with providence, I was able to make the two free shots that tied up the ballgame.  Cripple Creek brought the ball back down the court and made a shot that missed.  Our Center John Saulsbury with his height was able to get the rebound.  He passed to Guard Ray Cox who brought the ball back down the court and passed to me.  With just seconds left I drove in trying to take another layup shot.  Well guarded this time as I jumped up, and unable to shoot, I passed the ball behind my back to Forward Raymond Martin in the corner of the court.  If Raymond Martin could plant his feet and get a clear shot, he was able to sink a basket 99% of the time.  With two seconds left he took the shot, made it, and we were the Winners of the 1949 “Pikes Peak Junior High Basketball Championship Tournament” in Fountain.   “Teamwork”!


​Click below for companion stories by Chuck Spray (AKA Jeep Hack): ​
ABOUT THE AUTHOR
To discover why Charles Norman Spray was also known as Jeep Hack by his family and friends while growing up in Victor,  click this highlighted link to his "Recollections of Life in Victor During the Great Depression, World War II and After".
​     Charles (Chuck) Spray  included this preface titled “ THE WHY OF IT ” with his more personal memoirs submitted in December 2019.  My daughter who was always telling me “Dad, write down some of the stories you are always telling me.”  But I’d continue to procrastinate.  Finally, to appease her I started writing.  The more I continued to write, the more that came to light.  Sometimes I’d worry about how to start and just how or what I wanted to say.  Then I’d remember what that renowned writer of western tales Louis L’Amour once said.  “Don’t wait for an idea.  Don’t wait. Just Write”!  He also was to have said another verbal truth, “You have to turn on the faucet before the water starts to flow”!  “Just Write”.
Bear with me.  I hope you have the time or inclination to put up with the ramblings and recollections of a world weary old man.  Perhaps in the telling I’ve stirred up a few recollections you might have of your own life.  Put them down.  Don’t wait.  Write them down for your grandchildren and their grandchildren to follow.  The children of today need to know that some things weren’t always the way they are today--things that will never be in the history books nor be taught in the schools, things that made up your life.  It’s important they know of the world you knew, what took place before I-Pods, texting, and the abuse of one of man’s greatest inventions, television.
Please forgive my grammar, spelling, punctuation and over-all abuse of the English language.  The Cherokee people have no word in their language for goodbye, so I’ll just say “Happy Trails” until we meet again.
Chuck Spray
THE PAST MATTERS.  PASS IT ALONG.
The Next Generation Will Only Inherit What We Choose to Save and Make Accessible.