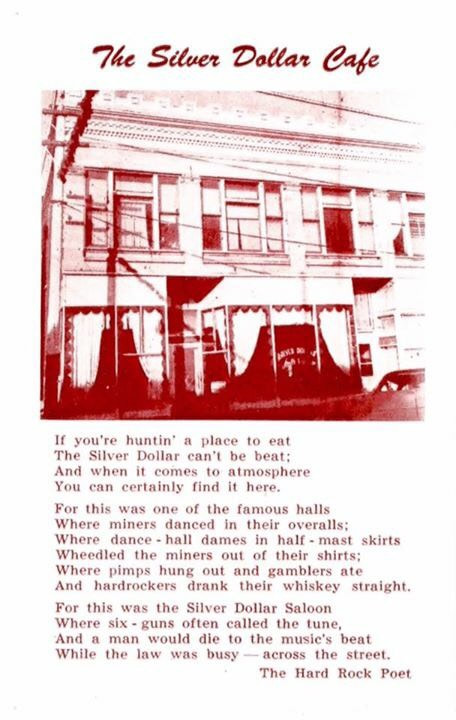 This promotional postcard for the Silver Dollar Cafe was used to attract and entertain customers with a humorous poem by Rufus Porter (The Hard Rock Poet) which celebrates the colorful history of the establishment. Vacant for many years, the building at 307 Victor Ave (also known as the Doyle Block) is now being renovated. Click on the "Preservation Successes" Page for details. Postcard from 1940s-1950s contributed by LaJean Greeson.
MEMORIES OF GROWING UP IN VICTOR, COLORADO WITH MY PARENTS--MAYME & CHARLES "BUMPS" CHAPMAN.
By Tom Schryver.

My family actually lived in many different houses in Victor from 1949 through 1964 until I graduated from CC-V.  The first house I remember we lived in was down in the “gulch” southwest of town just below the “Roman Rocks”.  Mom, Mayme Schryver, was raising we three younger kids (Joe, Judy, and me) who were still at home.  She raised us by herself at the time, and worked as a cook for Ma Johnson at the Silver Dollar Cafe and took in laundry for the miners in order to make ends meet.
I had a brother who died in Cripple Creek at six months old back in 1936 (Terry), and three other older sisters--Betty, Carol, and Patsy who married and left home in their early teens.  Our biological father had left Mom by herself to raise all six of us kids alone in 1946.  She did it well!  However, by ‘48 the government didn’t think mom was providing “well enough” and we three remaining “at home” kids were shipped to the Myron Stratton Home in Colorado Springs until she could prove that she was keeping good enough care for us.  It took her almost three years to “get us back” - but she sure enough did!  In 1951 mom traded the house in the gulch for one on 7th. Street, just up the hill.  The man she traded houses with was a Mr. Jacobs.  I think he owned a lot of property in Victor at the time.  I’m not sure how long we lived there because I was only around five years old, but we weren’t on 7th Street very long. 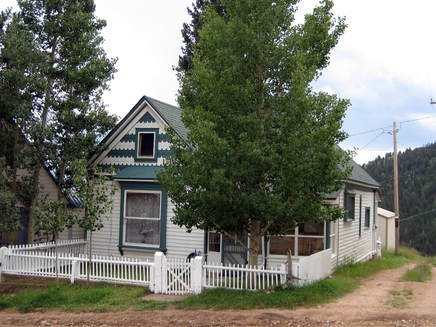 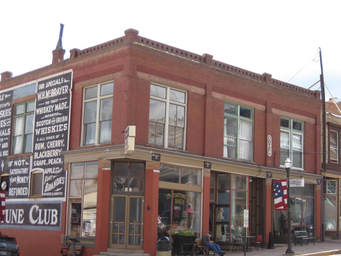 Ivan and Gertrude Harshberger operated Harshies Corner Drug & Variety Store for over 44 years. In those days people said, "If you couldn't find it at Harshies, you didn't need it anyway." In recent times the building has been known as the Fortune Club (2013 Photo).
​     About the same time when I was around 9 or so, Pop came home with a pogo stick he’d gotten somewhere for me.  It was a big old thing and after a few significant crashes I began to get the hang of it!  Our house on Lee Avenue is about 6 or 7 blocks from Harshburger’s Drug Store up on Victor Avenue & 3rd and it’s all up hill!  But one day I decided I’d see if I could “pogo” all the way up there without stopping.  I took off bouncing up and down to 4th Street, continued until I got to Spicer, then turned left to the steep hill of 3rd Street.  Now 3rd Street is the steepest and longest street in Victor.  When I got to 3rd, I bounced to the left and started my pogo ascent!  It was so steep I had to lean forward so much that the stick lost a lot of traction and cut my jumps down to about 4 or 5 inches per jump and slowed me down.  It probably took twenty minutes to get up to Portland Street, just a block below Harshies.  I was sweatin’ barrels by the time I made it to the store, but I did make it.  If “Ripley’s Believe It or Not” would have been there I guess I’d be famous.  Oh well! 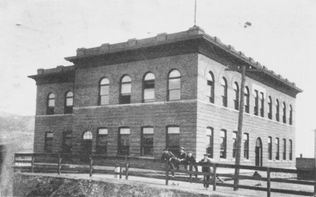 Victor School House (Photo contributed by LaJean Greeson)
I used to run around with Marvin Wing, Dennis Carter, Bobby Shepherd, and Jim Bielz.  Not all at the same time (maybe that was a good thing!)  Once, Dennis, Marvin, and me rode our bikes to the grade school.  We used to park them in an old dilapidated garage by the band room while we were in class.  My bike was an old one that Pop bought me and I’d painted it with some green paint I’d found somewhere.  It didn’t have  any fenders on it, and it looked a little bad, but I sure was proud of it.  Dennis and Marvin had newer fancier bikes than I did, but I’d rather have mine!  One afternoon when school was out, I went down to get my bike and Dennis and Marvin had already gotten theirs and went home.  When I got to the old garage and went to get on my bike I smelled something really bad!  It didn’t take long for me to find out that those two “buddies” of mine had urinated all over my bike!  Boy, was I mad!  I don’t remember now, but I probably got even with them somehow.

​     Well, I’ve got lots of stories that happened in the next 8 or 9 years when I finally graduated from CC-V High in 1964.  It’d take a lot of paper to write them down and I’m probably the only one left that would find them very interesting.  So I’ll call it quits for now. 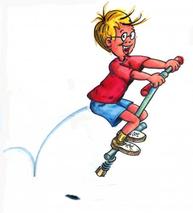 When Tom left Victor, he usually came bouncing back--almost like riding his pogo stick to Harshies.
MORE ABOUT THE AUTHOR--TOM SCHRYVER

After graduating from Cripple Creek & Victor High School in 1964 I joined the US Air Force.  I was first sent to the Philippines and then to Altus, Oklahoma where I met my wife, Gwen.  After discharge from the Air Force in 1968, we came to Victor and rented Mr. McClintick's house on Lee Avenue for a year or so.  While we loved living right across the alley from the house where I grew up, the company I was working for (Dr. Scholl's of Chicago) felt I needed to live closer to Colorado Springs to be nearer to my sales calls—so we moved there.
But Victor was still calling me home, so we bought the old Townsite of Lawrence from Mr. Bradley and left Dr. Scholl's.  Now I knew Lawrence pretty well as a youngster because it was in my hunting area as a kid.  Once while hunting there in my youth, I met Mrs. Lewis (as a young hooligan I called her "Old Lady Lewis”).  She'd been the wife of the man who had a dairy there in the early 1900's after Lawrence lost out to Victor for convenience to the mines.  She caught me out by one of the barns and scared the tar out of me!  To my surprise, however, she was a wonderful lady and invited me in for a lunch of fried 'tators and dandilion stems!  She told me she was a Seventh Day Adventist and held her services in one of the caves on the road from Victor.
When we bought Lawrence, we lived in Mrs. Lewis' old house.  Gwen and my daughter Lori and I fixed it up some.  Since there was no city water, I got a couple of old electric poles and set a 350 gallon tank on them above the house so we'd have gravity-fed water inside.  I was working for a construction company at the time as a water truck driver and filled the elevated water tank occasionally.  We lived without the comfort of electricity for 2 ½ years but enjoyed having chickens, cows, a couple of horses, pigs, turkeys, and a great garden watered by the "gray" water from the house!  We all really loved living at Lawrence, but because of its "shantiness" none of our parents were impressed!
To the West of us lived Shorty Bielz and his family!  They're still there today!  Shorty was a teacher and sometimes my daughter would meet him on the road and he'd give Lori a lift to the school—especially when there was snow on the ground!  After we got the opportunity to sell Lawrence at a good profit, we leased Phantom Canyon Ranch (about 5 miles south of Victor) and lived there for a couple of years.
Eventually we felt led to enroll at Arlington Bible College in Texas.  We moved down there until I transferred to Denver Baptist College.  Later I worked as a Music Minister in Denver and Colorado Springs for a couple of years, and then moved again to the District where I was the music minister for Pastor Jim Royal at Cripple Creek Baptist Church.  During that time I also worked as a Crusher Operator at the Mill between Cripple Creek and Victor.
THE PAST MATTERS.  PASS IT ALONG.
The Next Generation Will Only Inherit What We Choose to Save and Make Accessible.