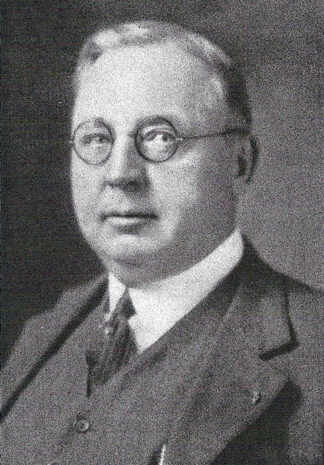 John Reed Gardner, I at 65 years of age when President of the Merchants Fire Insurance Company in 1929. At the turn of the century, in Victor, he owned and managed the Gardner Mercantile. Later he was president of the Citizens Bank of Victor.
MEMORIES OF MY GRANDFATHER, JOHN REED GARDNER (1864-1951)--Gardner Mercantile Owner, Citizens Bank of Victor President, Merchants Fire Insurance Company Executive.  Submitted by John Reed Gardner, II (grandson).

My grandfather, John Reed Gardner, was born on September 15, 1864 in Polo, Illinois.  He was the oldest of five children born to Charles and Catherine (Reed) Gardner.  Charles Gardner moved his family to a farm in Clay County, Nebraska where my grandfather received his early education in a little red schoolhouse and assisted his father with the farm work.

At age 20, John Gardner moved to Oakley, Kansas where he was in the livery business for five years.  On February 22, 1888 he married Emma L. Epard of Colby, Kansas.  John and Emma Gardner’s first son, Guy N., was born November 19, 1888 in Oakley, Kansas.  The Gardner family next moved to Pueblo, Colorado where John was active in the Commission business for two years and his second son, Clyde H., was born January 10, 1891. 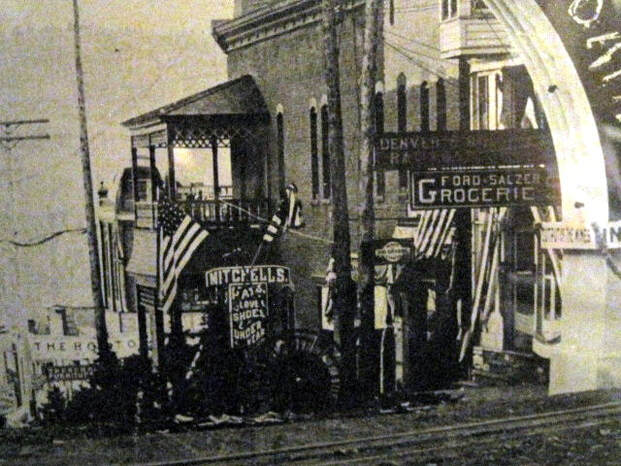 July 4, 1899 photo of North 4th Street shows the Original Victor Hotel (with balconies) at the corner of 4th & Victor Ave; Mitchells Hats, Gloves, Shoes & Underware; the Denver & Rio Grande Railroad Ticketing Office; and Ford & Salzer Groceries at 111 N 4th Street. Seven weeks later, on August 21, 1899, a devastating fire destroyed the Ford & Salzer Grocery (purchased by John Gardner in 1897) and virtually the entire downtown Victor Business District.
John Gardner became a resident of Denver in 1891 where he was employed by the Hanson Produce Company for one year, the N.B. McCrary wholesale grocery house for three years, and the Brown Mercantile Company for two years.  In 1897 John Gardner purchased a meat and grocery business in Victor, Colorado from the firm of Ford and Salzer.  This business was located at 111 N 4th St where it continued to operate as Ford and Salzer Grocery for a couple years.  It can be seen nearby the Original Victor Hotel in a photo taken on July 4, 1899.

On August 21, 1899 a fire broke out in a Victor dance hall.  The conflagration spread rapidly over fourteen blocks of the Victor business district which was devastated in a few hours.  Nine-tenths of all the buildings consumed by the fire were wood frame, dry as tinder, and burned like chips.  The next day the Victor Times  newspaper reported Gardner's business was among those destroyed by the conflagration.  An early estimate of the losses of buildings, merchandise, and furniture throughout the City totaled $1,500,000 with only 25 percent covered by insurance.

​     Rebuilding of the decimated business district commenced almost immediately—this time with brick, stone and iron materials.  The use of more fire resistant building materials reportedly meant a reduction in the cost of insuring buildings and inventories by 10 to 20 per cent.  According to family legend, Gardner's business was also among the many uninsured Victor businesses consumed by the fire.  This experience propelled John R. Gardner on to another career path in the fire insurance business three years later.
In 1900, just a few months after the fire, John R. Gardner reopened his business as the Gardner Mercantile​ (relocated to 120-122 S 3rd Street) in partnership with Lee Hall.  The business steadily grew until it had a bakery, a wholesale and retail grocery outlet, and shelves of queensware, china, glass, tins, and graniteware—all under one roof.
​
Victor City Directories for 1900 and 1903-04 report the address of John R. Gardner's residence as 205 S 6th Street—about three blocks from his Mercantile and less than a block from the boyhood home of Lowell Thomas at 225 S 6th Street.  Lowell Thomas remained a friend of the Gardner family over the years. 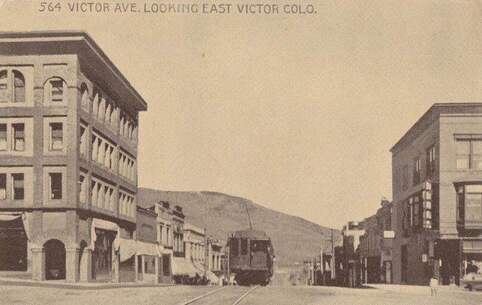 The Bank Block (left) was reconstructed after the Great Fire by the Woods Investment Company for their First National Bank and opened in December 1899. After the Woods Empire collapsed the building was acquired by Albert E. Carlton for his City Bank. Around 1915 Carlton sold the bank to J.R. Gardner who reincorporated under the name of the Citizens Bank of Victor. After remaining vacant for many years, the restored building reopened in 1992 as the Victor Hotel.
John Gardner continued to operate his Victor mercantile business as both president and manager until 1905.  At that time, he became partners with George Simonton, who came into the business as treasurer and manager.  After this, Gardner became less active in the mercantile, and eventually sold out to Simonton in the early 1910’s.  These changes coincided with Gardner’s advancing leadership in the statewide association of merchants, as well as a fire insurance company for merchants that he was developing in Denver.

From that position John R. Gardner conceived the idea the Merchants Mutual Fire Insurance Company which he organized (along with several other members of the Retail Merchants Association) on March 1, 1904.  No doubt his experience in the Great Victor Fire influenced his perception of the need for this venture.  By 1910 this had become a stock company known as the Merchants Fire Insurance Company.  On the occasion of its 25th Anniversary celebration on March 1, 1929, John R. Gardner was president of the company which had expanded to 28 states.  The Denver agency was incorporated as the Gardner Agency, Inc.

After 1904 there is no record of John R. Gardner having a residence in Victor, but he continued to have business interests there.  His business address was reported in the City Directories for 1905 and 1907 as 122 S 3rd Street (the location of Gardner Mercantile).

​     Gardner eventually acquired A.E. Carlton’s City Bank at the corner of Victor Avenue and 4th Street and reincorporated it under the name of the Citizens Bank of Victor.  The 1915-16 Directory for the City of Victor lists John R. Gardner (resident of Denver) as president of the Citizens Bank of Victor, with P.H. Argall as vice-president and D.M. Dukes as cashier. The 1917-18 City Directory lists J.R. Gardner (resident of Denver) as president of the bank with O.S. Anderson as vice-president and M.E. Duke as cashier.  This financial institution failed during the Depression.
The Merchants Fire Insurance Company continued to grow under the leadership of the Gardner family.  John R. Gardner continued to lead the company until his death in 1951 at which time Guy N. Gardner was elected President and served in that capacity until his death in 1953.  Clyde H. Gardner was then elected President and served as such until the company was sold in 1958 to the Swiss owned American Liberty Insurance Company in a $2 million cash purchase.  Poor management by the new ownership resulted in the failure of the company in a very few years.

At its height, before the sale, the company had Branch Offices in California, Pennsylvania and New York.  Several hundred insurance agencies throughout the country wrote insurance through the “Merchants of Colorado” for over 55 years.
The Gardner Agency, Inc. was started in 1918 under the name of Hiram C. Gardner, John R. Gardner’s younger brother.  It was the only insurance agency authorized to represent the Merchants Fire Insurance Company in the Denver area.
Submitted (October 2019) by John Reed Gardner, II.
​
John R. Gardner, II became a member of the Victor Heritage Society several years ago.  In September 2019 John revisited the City of Mines with a party of seven including his son (Scott Gardner) and daughters (Gay Gardner Underbrink and Becky Gardner Fawns). 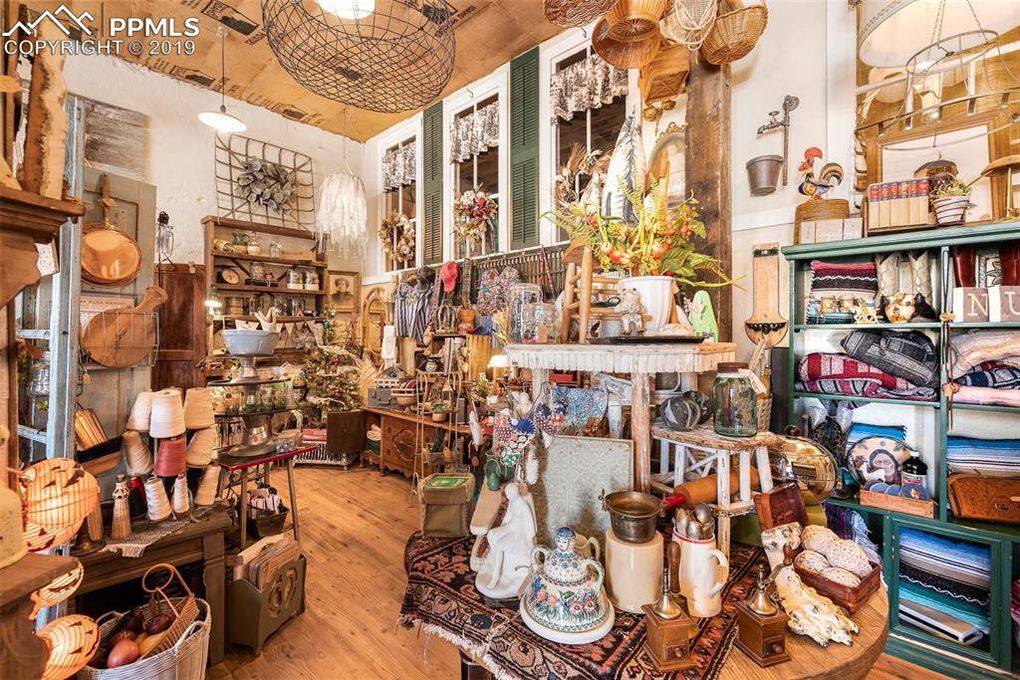 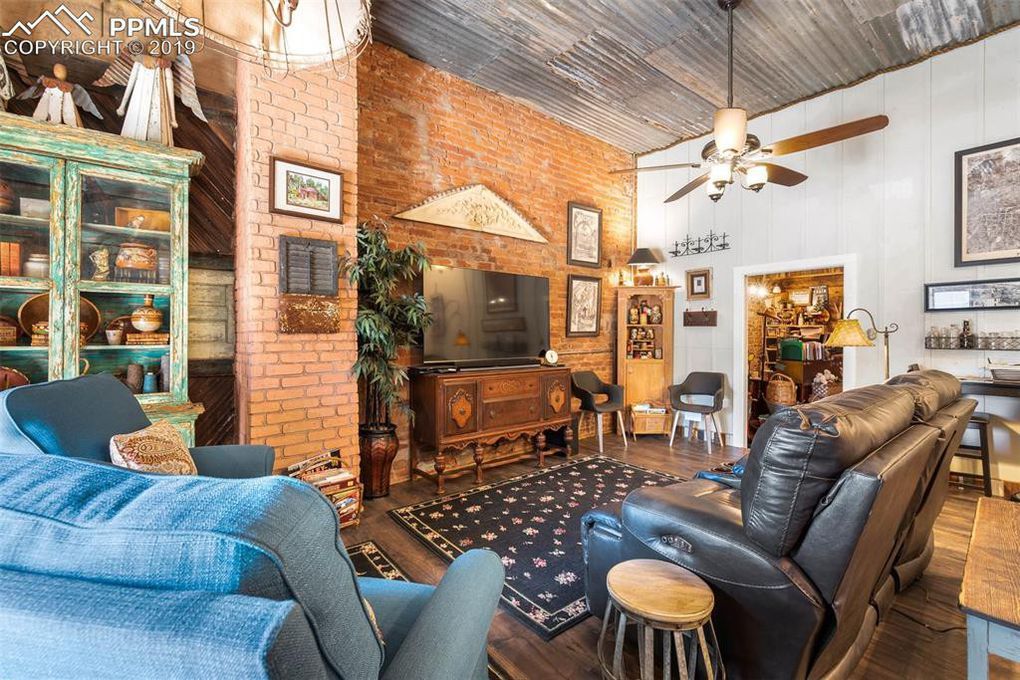 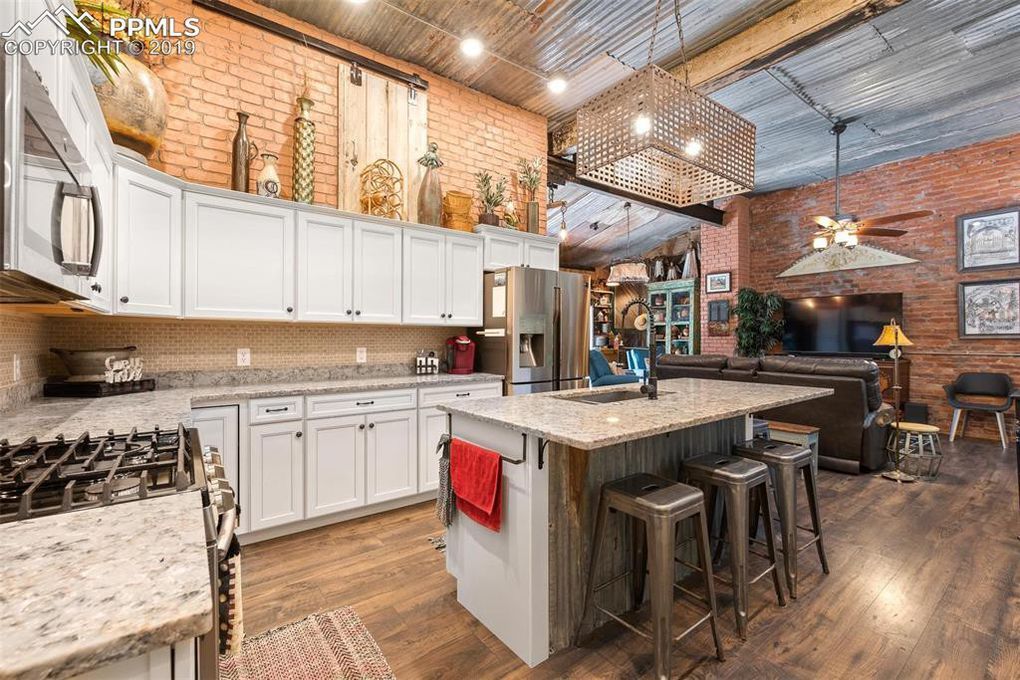 Interior "Shopkeeper's Quarters,Junk Posse Shop
Click on photos to enlarge.
THE PAST MATTERS.  PASS IT ALONG.
The Next Generation Will Only Inherit What We Choose to Save and Make Accessible.