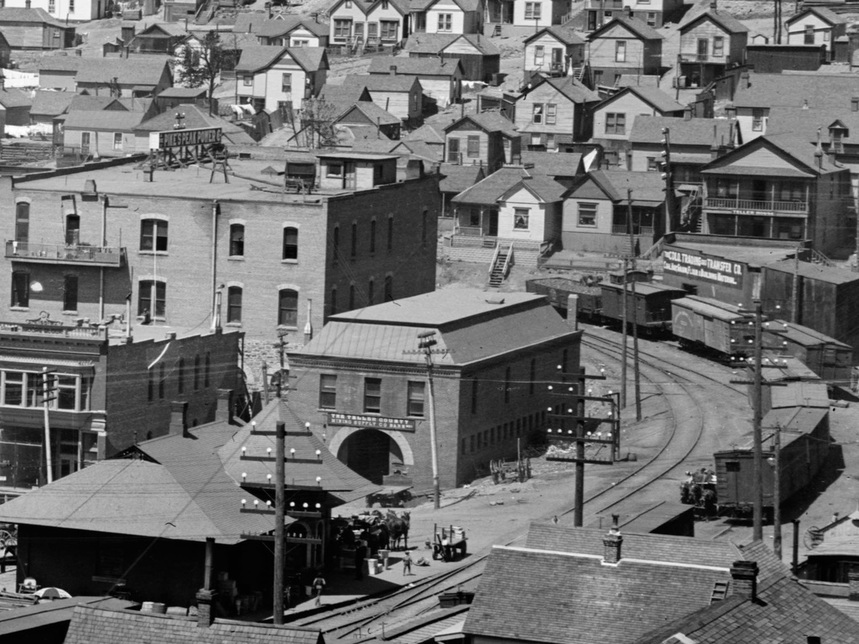 The Ice Storage Facility in Victor was located on North Fourth Street in the building with the arched entryway--directly across the street to the west of the Midland Terminal Depot. The sign above the archway in this photo, taken around 1900, says "THE TELLER COUNTY MINING CO SUPPLY BANK". Apparently "supply bank" would mean "supply warehouse" in terminology more familiar today. Photo provided by LaJean Greeson.
HYNES BROTHERS ICE CO--Memories of Mary Ellen Hynes Chetelat

When you’re 100 years old you can look back a long way, and Mrs. Mary Ellen Hynes Chetelat of Denver remembers sleeping under a buffalo robe in the Denver railroad station, making her first telephone call, and helping to sell clean ice to the bars and households of Victor, Colorado.
Clean ice was unusual in Victor in 1900, and so ice you could see through was easy to sell.
Mrs. Chetelat was born into the Hynes family of Mill Springs, Mo., members of which came to Colorado in the 1870s.  By stages Mrs. Chetelat joined other units of the family in Victor while the mining boom was at its height.
There was plenty going on in a bustling place like Victor, but Mrs. Chetelat especially remembers the clean ice that the Hynes Brothers Ice Co. sold to saloons to keep their kegs of beer cold.
Ice harvesters in those days cut the ice from frozen lakes and ponds, and sold it the way they found it, laden with leaves, twigs, dirt, discarded trash, insects and occasionally the cadavers of small animals.  As the ice melted in the beer coolers the bottom of the ice boxes became slushy with unmentionable goop.
The Hynes brothers decided clean ice would sell.  They created a pond by building a dam across a small stream.  They raked and picked up everything that would contaminate the water, and kept the lake surface clean until the water froze.
The result was that the ice froze clean.  A crew scored the surface of the lake and men with saws cut the ice into 300-pound blocks.  These were hauled to the warehouse of a trading company in Victor. 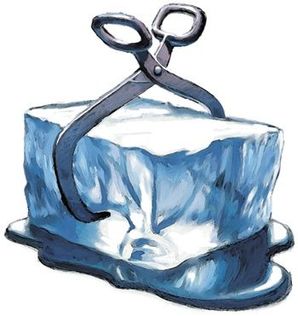 At first the customers didn’t know Hynes ice was clean.
“I got on the telephone and called the saloons,” Mrs. Chetelat says.  “I told them Hynes ice was so clear that it could be put right into a glass of drinking water.  No one had ever heard of that before.”
The saloons were ready to give Hynes ice a try but the company still needed a spectacular demonstration to prove its claim.
So some brawny icemen put a newspaper on the board sidewalk of one of the busiest streets in Victor, hefted a 300-pound cake of ice onto it, and invited passersby to read the newspaper through Hynes ice.
That did it.  The people of Victor demanded Hynes ice, and the company sold all it could produce.  They later got a second reservoir to use for freezing ice and rented a warehouse where they could store ice in sawdust until it was needed. 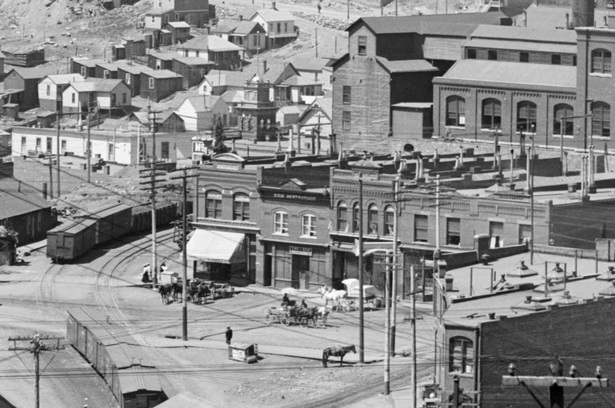 "Perhaps" the white covered-cart pulled by a team of white horses down North Fourth Street might be an ice delivery wagon--signage on the wagon is unreadable. Photo ca. 1900 provided by LaJean Greeson--click to enlarge. The railroad crossed North Fourth Street behind today's Jet Service property. In the background, notice the massive brick shafthouse of the Gold Coin Mine and the decorative cupola of the Victor City Hall.
​     Hynes Brothers men would clean the ice boxes of the saloons free, and thereafter deliver clean ice to keep them clear of debris.  Hynes wagons would deliver ice all over town, often with children following them to get the chips left on the wagon beds by the icemen’s picks.
​     Mrs. Chetelat was born Aug. 6, 1871, one of 10 children of Martin Luther Hynes and Izana Casteel Hynes.  After her father came to Colorado and got a contract to supply wood for the Bassick mine at Querida, near Westcliffe, Colo., Mary and other members of the family joined him.
It was on her way by train to Querida that little Mary Hynes and her sisters and brothers arrived in Denver and had to stay in the station overnight because their mother couldn’t find a hotel room.  Mary remembers that a kindly conductor found a buffalo robe for her to sleep under in the station.
In Querida she lived in a log cabin, went to school in Rosita, and met a boy, Henry Chetelat, who would steal her books.  She would have to kiss him to get the books back.  They were married in Westcliffe in 1892.  (Henry Chetelat died in 1917.)
At school Mary was taught by Miss Lilly Swanson, later Mrs. George Beardsley.  Mary Chetelat was married and already the mother of children when she heard about the telephone.  Full of curiosity she looked up Miss Lilly, who had one, in Westcliffe.
“Miss Lilly, I want to talk on the telephone,” she said.
Miss Lilly showed her the list of numbers and she found the telephone number of one of the Hynes brothers who had already settled in Victor.  She got him on the telephone.
“I just had to talk to you,” Mary said.  “I just wanted to talk on the telephone.”
But that brother, Sylvanus Hynes, persuaded Mary and her husband and children to move to Victor, and take advantage of the boom.  The trek from Querida to Victor took three days.
Members of the family stayed in Victor and operated the ice company until the mining industry declined in Victor, then moved to Canon City and established the Hynes Ice Co. there.  The family operated this until 1956 when it was sold.
​​ Additional Notes:
THE PAST MATTERS.  PASS IT ALONG.
The Next Generation Will Only Inherit What We Choose to Save and Make Accessible.
​
Please Share Your Memories and Family Connections to Victor & the World's Greatest Gold Camp by
Contacting Victor Heritage Society, PO Box 424, Victor, CO 80860 or e-mail VictorHeritageSociety@gmail.com.
CLICK HERE FOR MORE MEMORIES AND STORIES OF FAMILY CONNECTIONS TO VICTOR & THE WORLD'S GREATEST GOLD CAMP.