MEMORIES OF FANNIE & ALFRED OSBORN:  My Great Grandparents Who Lived in Teller County at Gillett Flats, Victor and the Osborn Homestead which is now part of Mueller State Park.
By Marge Breth
My great grandparents, Frances Sophronia “Fannie” (Hopkins) Osborn and Alfred Henry Osborn, came to Colorado behind a covered wagon with three small children—all the way from Guthrie Center, Iowa in 1888.  My great grandmother told me often of the trip out from Iowa and said Poppa (great grandpa) parked one night on a bed of rattle snakes, which caused quite a stir.  Fannie and their oldest child Annie (seven years of age) herded a few cattle and sheep up Ute Pass while Poppa drove the horse-drawn wagon carrying the younger children who were too young to walk, Bessie (age three) and Sumner (age two).
The Osborn family settled in Gillett, Colorado, which at that time was just a wide spot in the road.  Remnants of the old house they lived in are still there.  The Midland Terminal Railroad, which reached Victor in December 1894, had a water tank at Gillett and Poppa had been hired by the railroad to put water on the trains as they came into the station headed for the towns near Cripple Creek and Victor.  While they were waiting for the engines to fill up with water, Great Grandma Osborn fixed meals for the miners consisting of homemade rolls, beans with ham and cinnamon rolls.  During the time they lived in Gillette, four more children were added to the Osborn family—Katherine (Kitty), Nellie (my grandmother), Earl (my grandmother’s twin brother also known as Neil), and Hazel.
After a few years, more families settled in the Gillett area.  On cold winter evenings they got together and made beautiful elaborate homemade quilts.  Even the men helped.  My sister, Earleen, has a couple of those quilts.  You can see the men’s and women’s signatures embroidered on them (including my great grandpa Osborn’s signature).  They also had pot luck suppers when they sewed.
The Osborn children went to the school in Divide and most of the other families helped get the children there in winter with horse drawn wagons, as did Great Grandpa Osborn.  During warmer weather the children had to walk and that was over four miles.  The children carried baked hot potatoes in their pockets to help keep their hands warm, as well as that was their lunch.  That old school house is now a church at the corner of Highway 24 and Highway 67.  It has been added on to many times, and housed many different functions in the years that have followed.
Great Grandma Osborn told me when the twins were born, while they were living in the Gillett flats, both were so small they fitted in a shoe box, which was small in those days.  They didn’t think the boy child would live, and had not named him, but my Grandmother Nellie called him Earl and finally, at close to a year of age, they named him Neil as they had named her Nellie.
A rich miner offered my great grandmother a job running a boarding house for the miners in Victor.  It was a large log house that still stands at 705 Victor Avenue.  The owner of the boarding house supplied Great Grandmother Osborn with flour, rice, beans and sugar in 100 pound sacks.
At the time there were seven Osborn children to help with the work.  Being a poor family and living in hard times, all the girls quit school at an early age and married early.  They all attended country dances with suppers in Divide, Cripple Creek and Victor where future husbands were met.
While living in Victor and managing the boarding house, Great Grandma Osborn raised chickens, some geese, a couple pigs, a goat and a cow.  The animals had to be fed, the cow milked, and eggs gathered.  Water had to be drawn, and wood had to be brought in for the kitchen stove and the stove in the parlor.  There were no stoves in the bedrooms in the boarding house at that time.  Lye soap had to be made from lard and wood ash out in the yard in big vats. 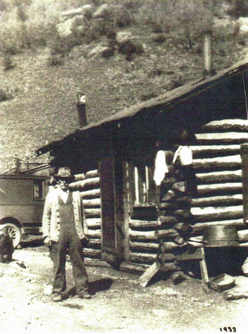