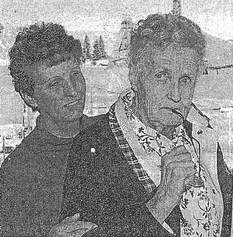 Tish Allen with her mother, Eleanor Baker, January 2000.
Installment #1. SEVEN GENERATIONS IN VICTOR, COLORADO AND THE MINING DISTRICT--The Way It Was.

My Mother, Eleanor Musser Baker, loved Victor.  She was a 2nd generation Victor Native and lived 83 years loving Victor.  Her mother, Sadie Musser, was born here in 1890.  Both recorded years of memories of the area.

My mother was the youngest of four children and, having endured many sad experiences and severe family health problems, she never ceased to vividly remember details of the town and her experiences.  She worked in the boarding houses as a young girl, packing miners lunches, making beds, cleaning rooms before school, and later worked in the Victor Post Office for 43 years until retiring as Postmaster.​​
Mom always recalled old friends, old experiences, and old places.  Everyone has their favorite memories and my Mom and Grandma had theirs.  Here are some notes my Mom recorded.  Most come from mom after 1920, but some were recorded by her mother after 1890.

This 1896 colorized map is captioned as follows: "Town of Victor is possessed of all modern conveniences -- water, electric light, telephone service, paid fire department, etc. Also two of the richest gold mines in the world within its limits. Population 9,000." In the left half of the map, the large reddish building with a cone-shaped tower depicts the original Victor Hotel constructed on the NW corner of 4th & Victor Avenue by the Woods Family. To the west of the hotel, Victor Ave slopes downward to a bridge in the gulch. The trestle above the bridge served the Florence & Cripple Creek Railroad which traveled on through the "cut" where Highway 67 is now located.
ELEANOR BAKER AND SADIE MUSSER REMEMBER WHEN: ​CLICK HERE FOR INSTALLMENT #2 of this "Remember When" series recalled by Eleanor Baker and her mother, Sadie Musser.
THE PAST MATTERS.  PASS IT ALONG.
The Next Generation Will Only Inherit What We Choose to Save and Make Accessible.