Ernest T. Sly was the charismatic band leader and director of music for the schools in Victor and Cripple Creek for eleven years--from 1939 to 1950.  He was affectionately known as "Pop Sly" by his students and others throughout the community.  Almost everyone wanted to be in Pop Sly's band--and a very high percentage of those enrolled at the two schools participated.  Georganna McCleerey and Charles Spray (AKA Jeep Hack) were among Pop's many admirers.
Marching Band in Victor, 1946 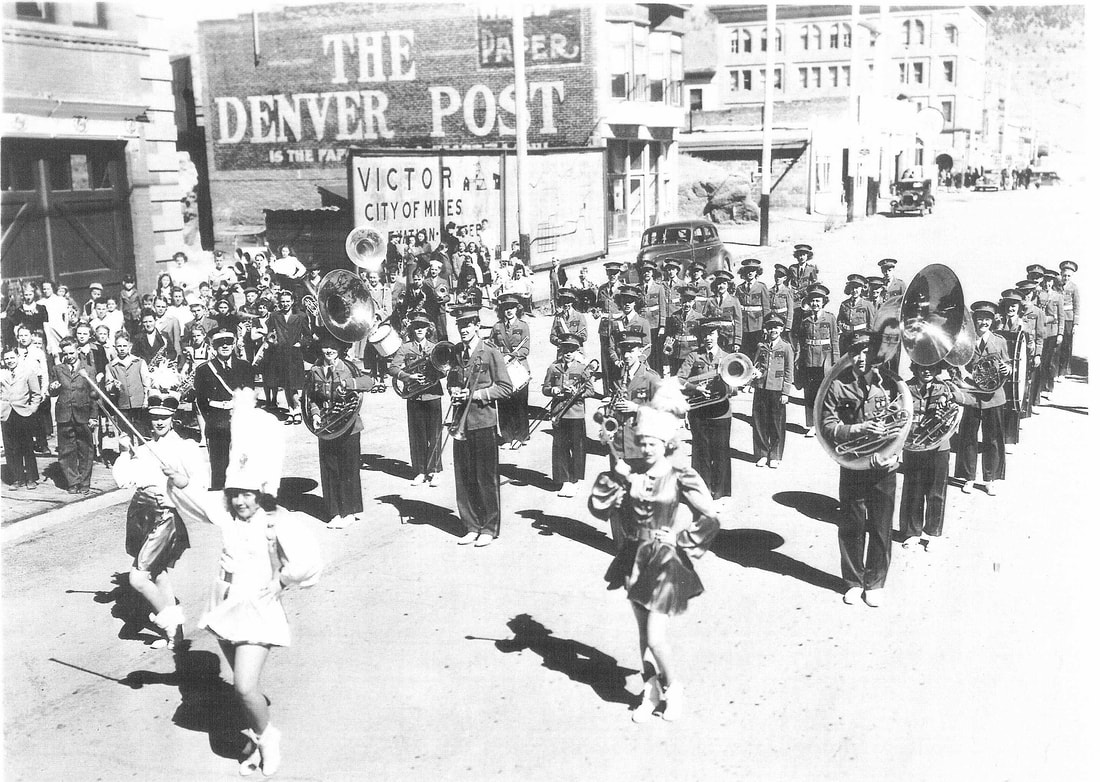 Others identified in photo include:
​Concert Band Performing at the Union Printers Home in Colorado Springs, 1947 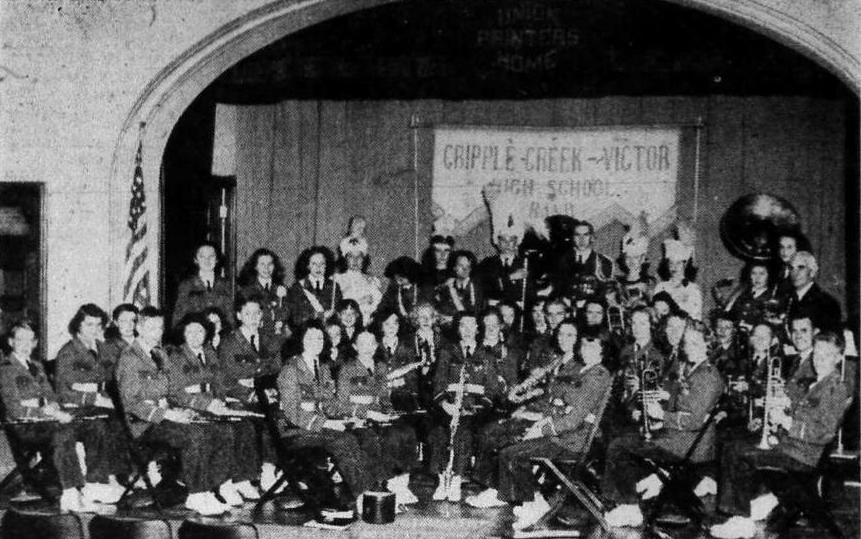 Cripple Creek & Victor Concert Band Performing at the Union Printers Home, 1947. Director Ernest T. Sly, far right at back.
Bands directed by Pop Sly gained prominence in the Region for their performances.  The photo above shows the combined Cripple Creek & Victor band in 1947 playing a concert for the lyceum program at the Union Printers Home “where many compliments were heard”.   [Digital clipping of photo from 1947 Gold Rush Newspaper shared by Steve Plutt.]

Original caption from digital clipping of 1947 Gold Rush Newspaper photo (above) shared by Steve Plutt. Click to enlarge.
​​Memories of Pop Sly—Director of Bands in Victor & Cripple Creek, 1939-1950
[Based in part on excerpts from June 26, 1950 Gold Rush Newspaper article shared by Georganna McCleerey Peiffer]
Years later, former student Charles “Sonny” Clark wrote a brief tribute to “Ernest T. Sly, The Band Man” [click link].  Clark recalled how Pop’s enthusiasm and talent enabled him to transform a ragtag group of students (who initially didn’t know which end of a horn to blow in) into proficient musicians.
Ernest T. Sly was a member of the Cripple Creek Elks and the Sylvanite club.  He was a 32nd degree Mason, a member of the Consistory and the Shrine.  His home lodge was in Yankton, S.D.  During the last year of his life, Mr. Sly was president of the Colorado Music Educators’ association, and very active in the association’s program.

The newspaper article published at the time his death (in June 1950) reported that Mr. Sly was survived by his wife, Lucy; two daughters, Mrs. Clyde Roberson of Lance Creek, Wyo, and Mrs. Ival Larmer of Chicago, Ill; a son, Fred Sly, of Rifle; two brothers, Percy and Tom Sly of Winnipeg, Manitoba, Canada; a sister in England; and three grandchildren. 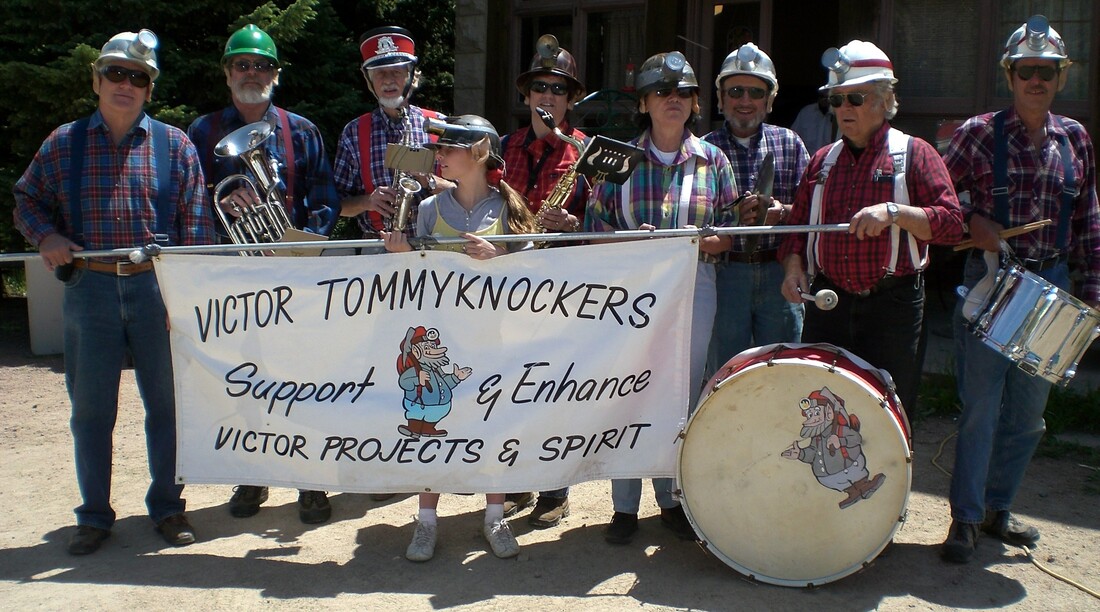 The VOLUNTEER VICTOR TOMMYKNOCKERS BAND has offered much appreciated "Marching Musical Entertainment" for annual Gold Rush Days Parades. Their "Youthful Exuberance and Homemade Costumes" more than compensate for their small (but mighty) numbers. Notice their "ears" and the "tin can headlamps" mounted on their hardhats. Band organizer Rich Ray, third from left. Photo shared by Maxine & Bob Marchese, fifth & sixth from left.
​ABOUT THE CONTRIBUTORS:
Georganna McCleerey grew up in Victor, Colorado.  She fondly remembers that time and place, as well as cherished childhood friends.  Georganna is married to Bud Peiffer.  After retiring, Bud and Georganna (McCleerey) Peiffer reconnected with their roots in the Mining District and now live in Cripple Creek.  Georganna has scrapbooks with an extensive collection of photos and memorabilia which she has generously shared in several stories contributed by others to the Oral History Pages of the Victor Heritage Society Web Site.  Thank you Georganna!
Charles Spray and Georganna were school mates in Victor.  To learn why Charles was also known as Jeep Hack, check his story titled "Recollections of Life in Victor".   He also shared these companion stories:  "Memories of Washington Elementary School", "Adventures at the Beaver Valley Ranch", "Memories of Ina & Henry Cleveland Hack", "Lighter Side of a Visit to Hack's Victor Barbershop", "Memories of Margaret & Henry C. 'June' Hack, Jr", "A Day in the Cresson Mine", "Firewood For Victor, Colorado", "Sports in Victor & Memories of the 1949 Pikes Peak Junior High School Basketball Tournament", Winters in Victor, Colorado during the 1940's & early 50's,   and Tragedies When I Was Growing Up In Victor, Colorado in the 1940's & 1950's.
Thank you Charles / Jeep!
THE PAST MATTERS.  PASS IT ALONG.
The Next Generation Will Only Inherit What We Choose to Save and Make Accessible.
​
Please Share Your Memories and Family Connections to Victor & the World's Greatest Gold Camp by
Contacting Victor Heritage Society, PO Box 424, Victor, CO 80860 or e-mail VictorHeritageSociety@gmail.com.
CLICK HERE FOR MORE MEMORIES AND STORIES OF FAMILY CONNECTIONS TO VICTOR & THE WORLD'S GREATEST GOLD CAMP.