In 1894, they suffered another loss of a stillborn little girl, named Genevieve.  June 18, 1899 – Tragedy strikes the little family, again.  Lula dies at age 33 of kidney failure, most likely inherited from her father who died of Bright’s disease.  Little Everett is seven years old, and has lost his mother….thank God for his grandmother.  Lula is buried in the Crystal Valley Cemetery, in Manitou Springs, along with her children Allen and Genevieve.
In 1900, we find Everett, Sr., son Everett Jr. and mother-in-law Elsie up the mountain in the mining town of Cripple Creek.  They subsequently move to Victor where Everett, Sr. establishes his Victor Mercantile Store at 306 Victor Avenue and marries Isabel (Ramsay) McCormack in 1905.  She is a widow with two children, Lawrence and Gladys Ramsay. 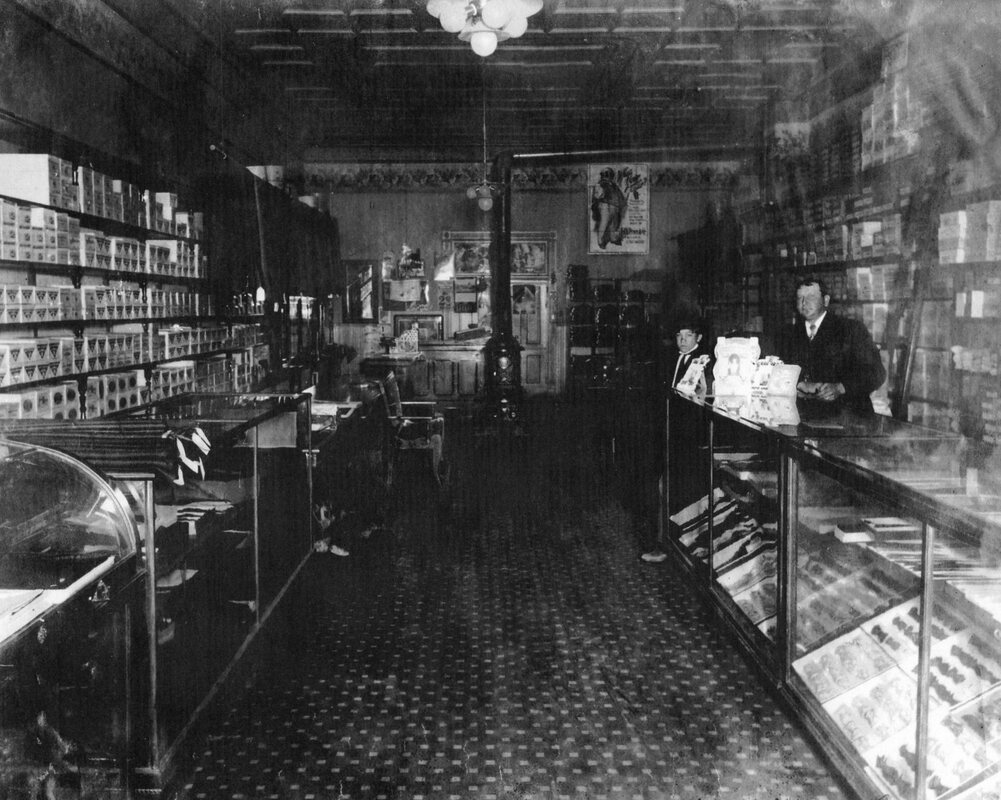 Interior of E.E. Goold Mercantile Store at 306 Victor Avenue with "gentlemen's furnishings, hats and caps, boots and shoes". Photo circa 1906 shared by Nellie Goold Young who notes: "That's my grandfather, Everett, Sr., standing behind the showcase. Look closely--that's my father, Everett, Jr., standing at the far end of the showcase. Recent exterior and interior photos of 306 Victor Avenue are shown below.
Everett Jr's grandmother Elsie moves to Denver, and Everett Jr. joins her along with her son, Fred and Fred’s son, Lyman.  On April 28, 1911, Elsie dies of stomach cancer at the age 66.  She is buried in the Crystal Valley Cemetery in Manitou Springs, joining Lula, Allen and Genevieve.
Everett Jr., at age 19, has lost his mother, his father and his grandmother.  He has been assigned a guardian to protect his assets.
In 1924, Everett marries Mary Alice Daves in Denver.  Something must not have been well to begin with in this marriage, as 1925 finds him in California working in a variety of constructions jobs.  He returned to Victor, and on January 9, 1929 divorced Mary.  (One never knows what really goes on between mates, and I would not begin to question why these marriages failed.)
FATE INTERVENES – Let me introduce you to my mother Lois Smith Posey.
Lois (Smith) Posey was born in Iowa in 1901, the daughter of Lewis Edwin “Ed” and Nellie (Dale) Smith.  In 1920, she married Clarence Posey, and they had two sons, George and Harold.  In 1927, they were living in Wyoming and Clarence was killed in a refinery explosion.  With two small children, she had no recourse but to return to her parent’s home in Trinidad, Colorado.  Sadly, her father was seriously ill and died shortly after her arrival.  Like Everett, she had two great losses in such a short time.
In 1928, Lois went to Victor to visit her sister, Millie.  Millie was doing quite well as there was money to make in taking care of many single miners.  She encouraged Lois to join her.  Lois rented a house and quickly began serving meals; and also started taking in laundry.
I was born on August 9, 1930, at the “Stork’s Nest” hospital in Inglewood, California.  Our little family was comprised of Everett, Lois, George, Harold and me [Nellie].  My parents provided us with all the love and affection that one could ever wish for.  I have often commented that there was never a harsh word spoken in our family.  We were truly happy!  Dad passed away in 1962, at age 69; mother died in 1995, at age 94. 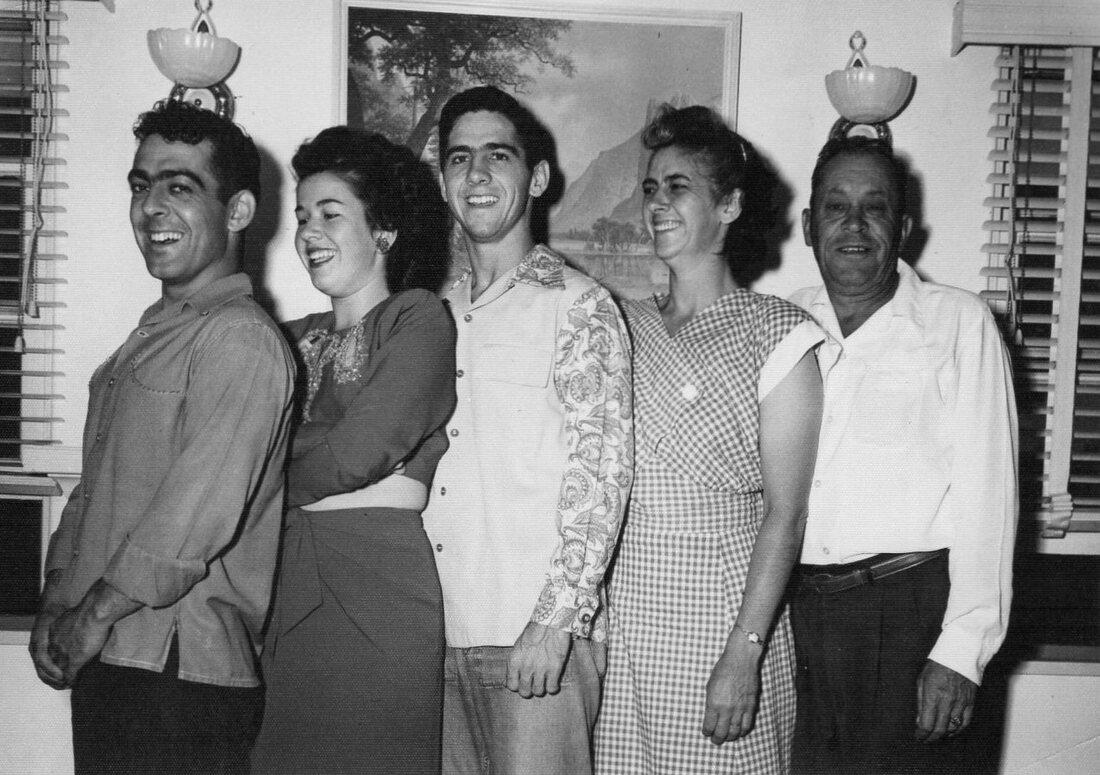 Our little family, 1948. George Posey, Nellie Goold, Harold Posey, Lois (Smith, Posey) Goold, Everett Goold, Jr. Photo shared by Nellie Goold Young, age 18 at the time.
THE TRILOGY FROM VICTOR, COLORADO -- "CITY OF MINES"
​     There were a number of noteworthy people who at one time resided in Victor.  I will be sharing the story of my father’s friendship with a few of them.  I must note that he never knew a stranger.  I will call this “The Trilogy” – and here goes.
Lowell Thomas
Lowell Thomas was the son of a doctor who practiced medicine in Victor.  As such, his father would have very likely had some relationship with my grandfather, Everett Goold, Sr., who owned and operated the Victor Mercantile Store; and also was a Mason and an Alderman.  Lowell was born in April 1892, my father Everett Jr. was born in May 1892; hence they probably attended the same grade at school.
Lowell certainly had worldwide recognition, beginning with news coverage of Lawrence of Arabia.  He was also known for his CBS radio news program, the longest running (46 years) in the media’s history.  In 1939, he is also considered to be the first network newscaster for television.  I can recall, that back in the 1940s, every movie house would show the feature film, a comedy, and the “Movietone News” with Lowell serving as commentator.
​Next Up--William Harrison "Jack" Dempsey
Sometime in the late 1940s, my parents and I made a trip to visit Jack.  I couldn’t recall the exact address, so looked in Dad’s pocket notebook and there it was – 5254 Los Feliz Blvd., and even had the phone number Olympia 5229.  We sat outside on lawn chairs and his daughter, Barbara, joined us.  It’s an experience I’ll never forget.
Morgan Williams (number three in the trilogy).
This is in memory of Morgan Williams, the kindest, sweetest human being I have ever known.  “Morg”, as we called him was born in Ohio, but quickly moved west to Victor, where we find him listed in the 1900 and 1920 census records, residing at 310 So. 3rd St.
As I have no direct knowledge of his early life, I do know that he was boxer.  Records show that he was a middleweight fighter with 42 bouts, 29 wins, 4 lost, 9 draws.  According to a newspaper obituary (most likely the Cripple Creek paper), “he came to the District in 1899 and gained a name for himself as a heavy weight fighter when he was matched against such men as Jim Flynn, Mexican Pete Everett, George Copland, Young Hector and Jack Johnson. Later he became a promoter and trainer, and Johnson and Jack Dempsey both came under his tutelage.  Williams acted as chief of police of Victor for some time.”  The Jim Flynn fight was held on Sept. 6, 1915 at the Victor Opera House, under the auspices of the Loyal Order of the Moose No. 403.
My parents had been thinking about purchasing their own home, and when they mentioned it to Morg, he told them to not do anything until we heard from him.  "Shortly after, the deed to the lot was ours.”  Morg wanted a home for ‘his little family’, and it was built and occupied by 1939.  Morg came, again, in the 1940s and stayed with us while working in the Naval Shipyards in Long Beach.
After the war, Morg returned to Tonopah, Nevada, where he died in 1947.  “He had left a postal savings certificate (which we were keeping for him) to Nellie.  He had a few war bonds, too.  Nellie said, Mother, put that money on his funeral bill, which we did.”​

"Goold Family Historic Ties to Victor, Colorado & Famous Former Residents of the City" (submitted June 2022) by Nellie Gould Young.
ABOUT THE AUTHOR
Nellie Goold Young is the granddaughter of Everett Elmer Goold, Sr. (1864-1911), and daughter of Everett Elmer Goold, Jr. (1892-1962).  Her grandfather and father had life-long ties to Victor, Colorado and friends made there.  Nellie was born August 9, 1930, in Inglewood, California--a year after her parents left Victor for California.
In 1950 her family visited a stepbrother, William, in Victor.  Nellie recalls going down a mine shaft, "quite an experience"; and seeing a collection of Lowell Thomas memorabilia displayed  by Mary Rankin, "such a lovely woman then in her 80's".  Mary and husband Sam lived in Victor during the booming days of the Mining District when Lowell Thomas was getting a start in the newspaper business, and Ralph Carr was a struggling lawyer who eventually became Governor of Colorado.  Both lived in Mary's boarding house and years later she took pride in having "helped raise" two of Colorado's most illustrious sons who she affectionately called "my boys".
Nellie Goold married Burton Young in 1949 and in 1955 they had a daughter, Tracy.  In 1975 Tracy married Eddie Light, and Nellie was soon gifted with two grandchildren, Eddie and Daneen.  Burton died in 2017; they had been married for 67 years.  Nellie resides in the home in California that they purchased in 1950 (71 years ago).  While researching her family history, she discovered ancestors from the American Revolutionary War and passengers on the Mayflower.  She is active in the DAR and a member of the Mayflower Society.
Thanks to Nellie Goold Young for sharing her Goold Family story about her grandfather and father.  It illustrates how people who met in Victor often stayed in touch and supported each other after they moved away.
THE PAST MATTERS.  PASS IT ALONG.
The Next Generation Will Only Inherit What We Choose to Save and Make Accessible.