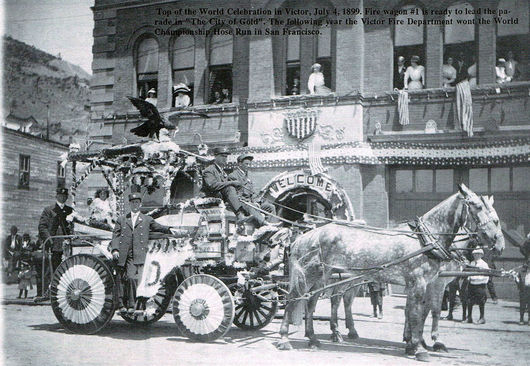 Fourth of July early 1900's--Horse-Drawn Fire Wagon #1 (in front of the new Victor City Hall constructed after the Great Fire of August 1899) is decorated for the parade. According to the caption embedded at the top of the photo, "the following year, the Victor Fire Department won the World Hose Run Championship in San Francisco."
GOLD CAMP CELEBRATION:  Fourth of July in Victor, Early 1900's ﻿
Childhood Memories Recalled by Gertrude Moore McGowan (1905-1992)
Submitted by her Daughter, Nancy McGowan Galbraith.

Fourth of July in our small mountain gold mining town was different in many ways from traditional celebrations.

​     For one thing, we had no speakers to declaim the wonders of our glorious land.  We knew without being told that there was no place like it, even though many of us children had never traveled even as far as the nearest big city, fifty miles away.  The high, tree-covered mountains surrounded the crater-like little town, with its up-hill and down-hill streets, the houses marching like stair-steps down the steep slopes. 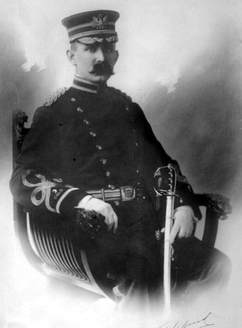 Harry Gordon Moore--When leading the parade, my father proudly wore his uniform from service as a Captain of Company L of the State Militia.
We had, first, a parade with the miners’ band in the lead.  My father, resplendent in his State Militia uniform and handle-bar moustache, marched in time at the head of it.  His knowledge and appreciation of music was limited to marches and “Red Wing” (a popular song written in 1907), but heading the street parade was among his big moments.

There were the usual floats on the big freight company wagons, elaborately decorated in red, white and blue crepe paper and bunting, representing the various clubs, lodges and other groups.  One memorable day members of a sewing club to which I belonged were allowed to ride in the parade.  We were sponsored by a business woman in town whose small shop featured women’s wear, sewing notions and embroidery work.  We were all dressed in our Sunday best, with cork-screw curls standing at awkward angles, apprehensive lest the horses might become frightened and run away, dragging us through the streets.  Nevertheless we were eager to be part of the big celebration and anxious to take our place in the line of march.  There were the saddle horses, sunlight shining on their sleek sides, prancing nervously, causing too eager viewers to step back on the sidewalk with squeals of panic when they veered too close. 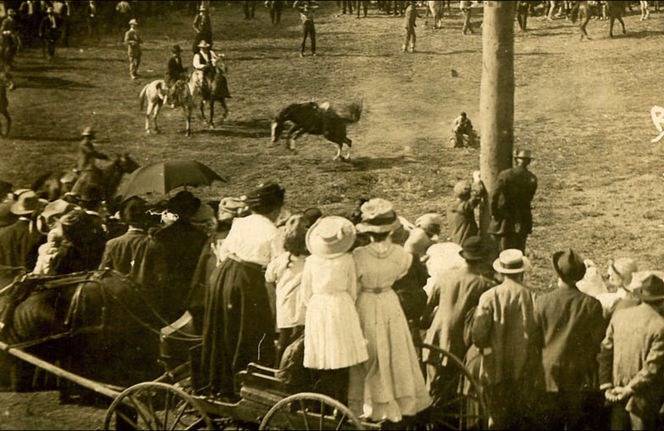 After the Fourth of July Parade, there was a ball game followed by lunch, and then a rodeo in the afternoon. My brother, Howard, competed in the Bronco Busting Contest and usually won first place--an honor about which he bragged endlessly.
Following the parade there was a ball game, then time out for lunch.  We children made short work of running the few blocks down the hill to our homes to gulp quick sandwiches and a glass of milk before hurrying back so as not to miss any important events.
​
A rodeo in the afternoon followed the lunch period.  Though I was afraid of the animals, I followed the crowd to the ball park and got a seat in the grand-stand.  The hot sun was blistering my neck and arms and the board seats were unyielding.  But since my brother was one of the rodeo performers, I stayed through it, eagerly watching for his appearance in the arena.  He competed in the bronco-busting contest and usually won first place, an honor about which he bragged endlessly.
The last and, to many, the most important event of the day was a drilling contest.  After the rodeo a huge granite rock was hauled onto the field and participating teams lined up to wait for the starting signal.  One man would hold the drill steel in place against the rock and the other wielded the single-jack, which is a four-pound hammer on a short handle.  The purpose was to drill as far into the rock as was possible within a stated time.  After each team finished, the measurement of the distance drilled was recorded and two more teams started.  This went on for as long as anybody wished to compete.

The prize was a huge $25, which seemed a large amount to be paid for what they did every day, and many competed.  No doubt it involved considerable skill, strength and team-work, but it seemed to me rather a silly way to spend one’s holiday time.  Anyhow I usually got nervous after the first couple of contests, fearing the hammer would slip and somebody get hurt.  Then I, along with other kids in my neighborhood, would gradually drift along home, hungry, thirsty, dirty, sunburned and tired.
​
There was a street dance in the evening, but that was off-limits for children my age.  I was secretly glad to fall asleep in my soft, clean bed, even though I begged till the last gasp for the privilege of dragging myself back up the hill to Main Street to watch. 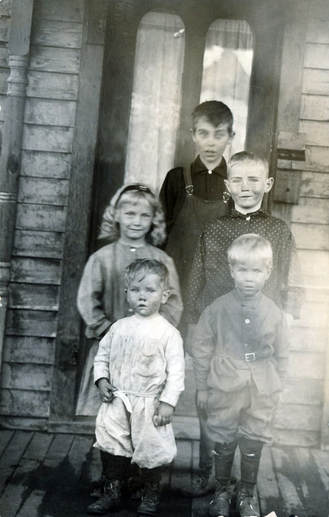 Moore children (about 1911) on front porch of home at 509 S 3rd Street. Back--Victor; Middle--Gertrude & Howard; Front--John & Edward. Not shown--Pearl & Wallace.
ABOUT THE AUTHOR:
At the time of this story, Gertrude Moore McGowan (1905-1992), daughter of Lulu and Harry Moore, lived at 509 South Third Street along with sister (Pearl) and brothers (Victor, Howard, Wallace, John, and Edward).
Click this link for “Memories Lulu Ella Manson and Harry Gordon Moore”—Gertrude McGowan’s recollections about how her parents arrived in Victor in the early 1890's and coped with the challenges of raising their family during boom and bust years into the 1930's.
Gertrude Moore graduated from Victor High School in 1923.  After pursuing additional education and job opportunities elsewhere, she returned to Victor to help her father in the Post Office.  While working there, she met Edgar McGowan and they married in 1933.  Click this link for Edgar McGowan’s “Memories of the Gold Rush Era in Victor—Those Who Struck it Rich & Lost It All.”
For the most part, Gertrude and Edgar McGowan raised their three children (Nancy, Elaine, and Donald) in Victor.  Gertrude was employed as a bookkeeper at the Cresson Mine office from the late 1940s until 1956 when they moved to Wyoming.  After Edgar died in 1967, Gertrude moved to California and then to Colorado Springs where she died in 1992.
Gertrude Moore McGowan’s recollections of 4th of July Celebrations during her childhood days in Victor were written when she was living in California.  The story was submitted by Gertrude’s daughter, Nancy McGowan Galbraith (1935-2021).  [Photos contributed by Nancy Galbraith and La Jean Greeson.]

​Click this link for another story of interest authored by Gertrude Moore McGowan titled "PAYING THE PIPER." Also published in GOOD OLD DAYS MAGAZINE in 1973, the setting is based on Gertrude's childhood memories and lessons learned while growing up on S 3rd Street in Victor, Colorado in the early 1900's.
ABOUT THE CONTRIBUTOR:
Nancy Galbraith (1935-2021) left a lasting legacy to her family and others by preserving and sharing fascinating stories about  her maternal grandparents (Lulu & Harry Gordon Moore) and parents (Edgar & Gertrude Moore McGowan).  According to her children, PJ & Keith, "Mom loved Victor and got a lot of enjoyment over the years sharing memories of the place where she grew up."  In her honor, they commissioned a plaque that says "Nancy Ella McGowan Higgins Galbraith traveled the world, but her heart never left Victor."  ​
THE PAST MATTERS.  PASS IT ALONG.
The Next Generation Will Only Inherit What We Choose to Save and Make Accessible.