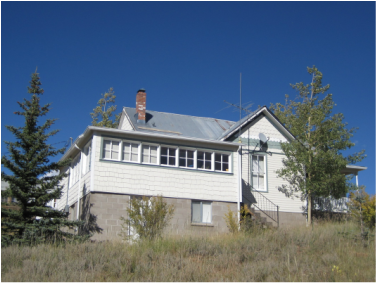 I rode my sled down Third Street often from where the pavement left off by the Isis Theater.  The route went down hill to the bottom, across the flat and up the other side, and sometimes I reached the top.  I must have been going 1000 miles an hour (at least it seemed so) at the bottom.  The Polkinghorns lived partway up the grade.  One day, my sled runner broke near Spicer, dug in the snow and tossed me.  I think I slid for a block.  We welded the sled but it didn't hold so next Christmas I got a new sled.  Kesseys lived about where the runner broke.  One of my childhood chums was Edgie Cox, who lived near the ice skating pond below the Baptist Church.
*****
My sister (who was born at home) and I explored all the mine tunnels in the area.  There was a tunnel northwest of our house but we never went very far inside because the floor was always flooded.  We lived charmed lives since we survived our childhood.  By the way, I was the last child born in the Victor hospital and my uncle Leo Sinclair's twin sister was the nurse on duty at that time.
*****
The Boy Scout troop was sponsored by the BPOE on Third Street.  I made the exalted rank of Tenderfoot and was working on Second Class when we moved.  I remember one hike we went on.  It felt like a million miles, but I had to pass a five mile hike for Second Class.  We went down Beaver Creek and then rode back in vehicles.  The Scout Troop went on a camp out on Wilson Creek one time too.
*****
My family bought acreage behind our home where we grazed our cattle.  Up to that time I had to keep watch over the critters as they grazed on the open range, but I liked to read and often lost track of their location.  I usually found them but had to hustle.  Anyway, my sister and I had to bring the cattle home from the pasture and since the hill was steep we grabbed a tail and let the cattle pull us up the hill.
*****
Just north of our house was another home that disappeared some time when I was growing up.  We acquired the land and between snows and turnip patch, I used to dig holes for my forts (roofed over no less).  All boys would have like to do that in those days.  My cousin, Leo Sinclair, who lived in Cripple Creek at the time, built an elaborate structure at his home.  It even had walls and a good roof.
*****
The ice on the back hill was a treacherous thing.  I would ride my sled down the last few feet and stop by catching my foot on a protruding rock.  One day I missed and my sister and I slid into the erosion ditch which was full of junk.  I have a scar on my nose and I had two black eyes for two or three weeks.  My sister only landed on her head so nothing showed but she was certainly dazed.  I was, by the way, on good terms with Dr. Denman and wouldn't always wait for my parents to go to his office to be patched up.
*****
I went to the elementary school grades 1 though 4.  The building is long gone now but Dr. Chaffee had his dental office across the street from the school.  Hated to visit him.  Fifth through twelfth grades were held in the Victor High School.
*****
The Isis theater now looks so tiny, but looked so big to a 10 year old boy.  I had to repeat one movie because I hid my eyes the first time during the scary scenes.  My father was a checker there, meaning that he checked for the audience size for the film distributors.  The Isis was owned by the Kesseys.
*****
The ice house at the north end of Second Street was closed, but we found a hole and got in.  Big ropes hung from the rafters and we would swing the length of the building and land in piles of sawdust.  Lots of fun.
*****
During the war, we had scrap drives organized by the school and we also collected on our own for profit.  I made quite a bit of spending money selling iron and copper.  We used to burn off the insulation before we sold the copper wire.
*****
We are products of the thirties and earlier when times were rough.  My father's father abandoned his family when my father was in the 7th grade.  To survive, my grandmother ran a boarding house and my father went to work to support the family.  We were figuratively kicked out of Victor when the government forced the gold mine to close.  Only metals important in munitions manufacturing, like copper, could be mined.
*****
I went to college, and had jobs as a meteorologist, petroleum engineer and demographer.  My sister worked for AT&T for many years, then the IRS.  I think we two Victor young-uns have done fairly well with what we were given.  At this time, my wife Sylvia and I have three children, six grandchildren, and four great-grandchildren.  That's where the riches lie.
*****
ABOUT THE AUTHOR:  Bob Penman once lived at 525 South Third Street in Victor, Colorado.  His memoir was submitted by Marilyn and Richard Fay--current owners of the home.  The memoir was published by Cathleen Norman in the Victor Preservation News, August 1998.
THE PAST MATTERS.  PASS IT ALONG.
The Next Generation Will Only Inherit What We Choose to Save and Make Accessible.