Photo Gallery of Historic Victor Artwork by Fred Shane, Circa 1942

Shown below are photos of artwork shared by Claudia Lohnes.  Claudia is curating the paintings and other works done by her grandfather, Fred Shane, an accomplished "regionalist" painter who discovered compelling subject matter for some of his artwork in Victor, Colorado during the early 1940's.
Claudia discovered a photo of Ovren's Book & Stationary Store, a building portrayed by one of her grandfather's paintings, on the Victor Heritage Society website.  She would like to know more about the history of this building and acquire additional background information about the subject matter portrayed in Fred Shane's other Victor paintings.  Let us know what you see by emailing VictorHeritageSociety@gmail.com.
TWO DEPICTIONS OF ORVEN'S BOOK & STATIONARY STORE 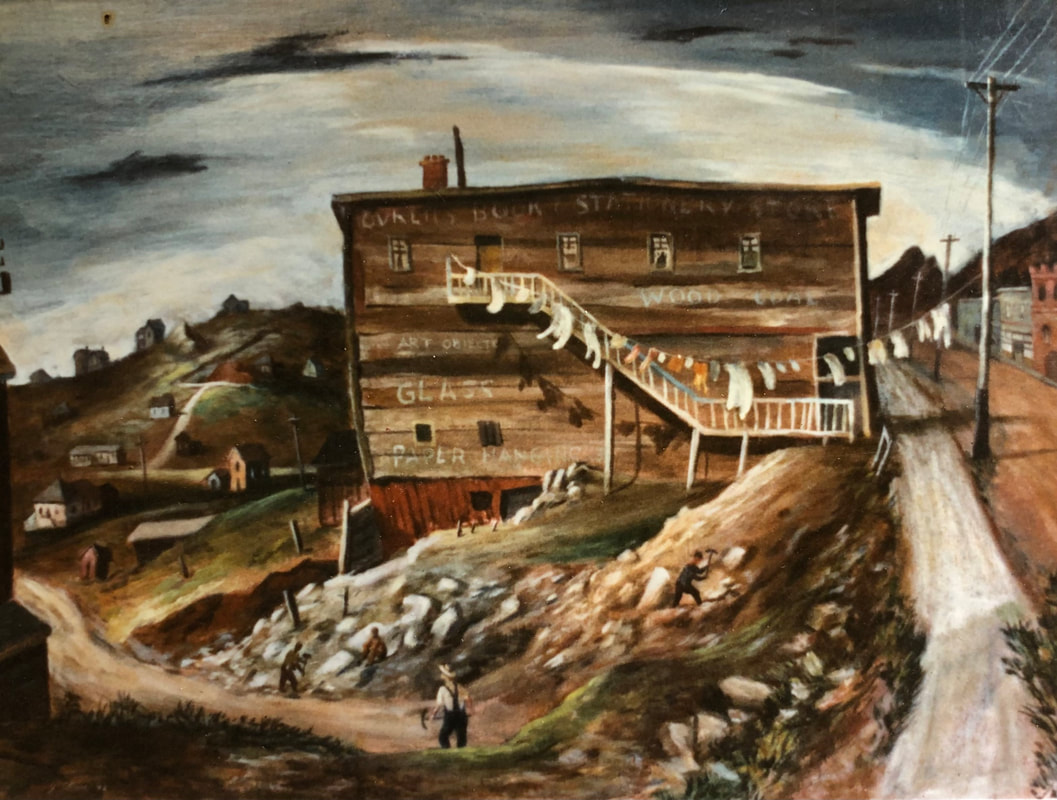 Advertising shown on the building in this oil on canvas painting by Fred Shane in 1942 reads "OVREN'S BOOK & STATIONARY STORE, WOOD, COAL, ART OBJECTS, GLASS, PAPER HANGING." Compare Fredrick Shane's artwork interpretation of the site with two photos of the actual building shown below.
Comments & Observations About Fred Shane's Painting of Ovren's Building:
Claudia Lohnes also found a black and white version of Fred Shane's portrayal of Ovren's Book & Stationary Store (shown below).  Shane's two paintings are similar, but not identical.  Both employ some degree of "artistic license".  The Victor City Hall is actually located in the middle of where North Fifth Street would be if it came through to Victor Avenue.  Ovren's building, on the opposite side of Victor Avenue, was actually located to the west of where South Fifth Street would have connected to Victor Avenue.  Georganna McCleerey Pheiffer does not recall a clothes line running along the stairway of the building, but that certainly adds a very nice touch to portraying the "character" of the building and people who lived there. 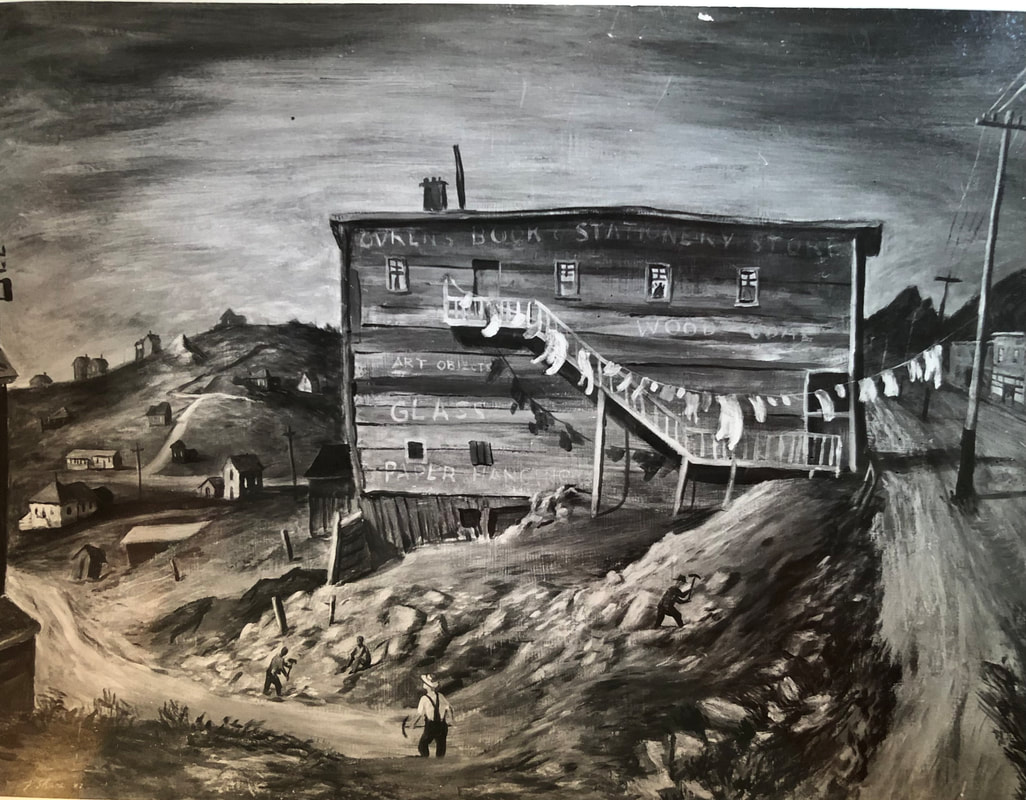 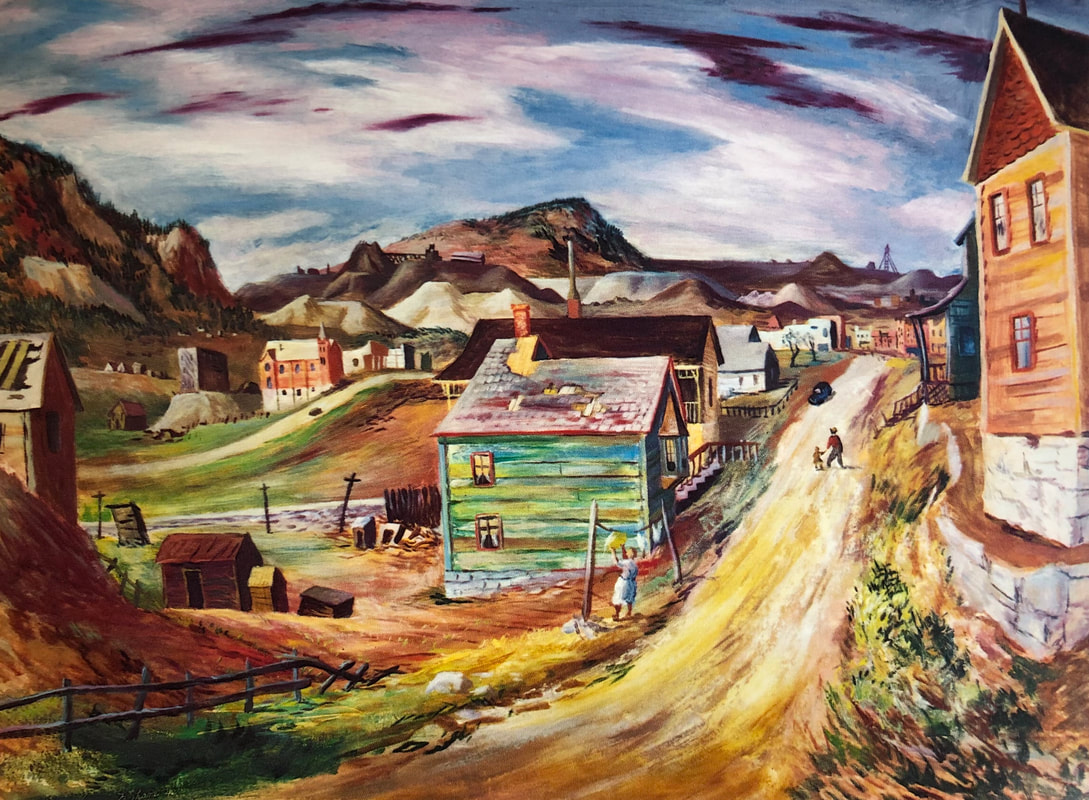 Photo of Fred Shane's Oil / Masonite Color Painting of Victor, Colorado from 1942. Claudia Lohnes, his granddaughter asks "Do you recognize these buildings?"
Comments & Observations About The Location & The Buildings In The Painting:
TWO DEPICTIONS OF AN OLD MINE IN VICTOR 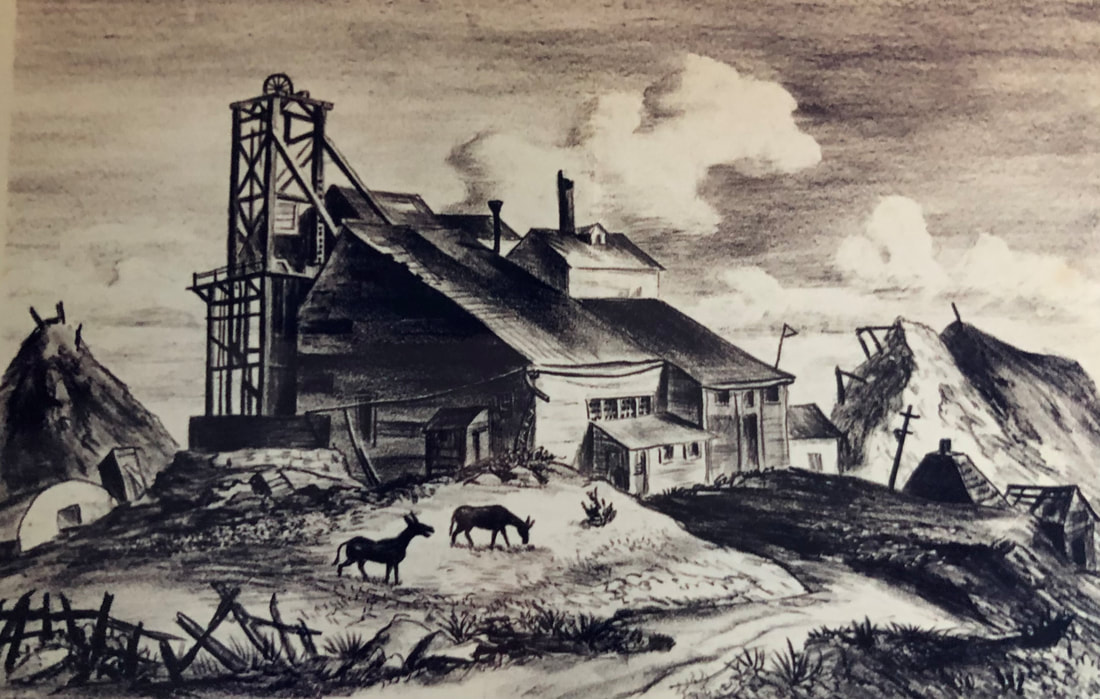 VIEW #1 -- Photo of a lithograph titled "Old Mine" in Victor circa 1942 by Fred Shane shared by Claudia Lohnes.
Comments & Observations About the Painting Titled "OLD MINE" IN VICTOR: 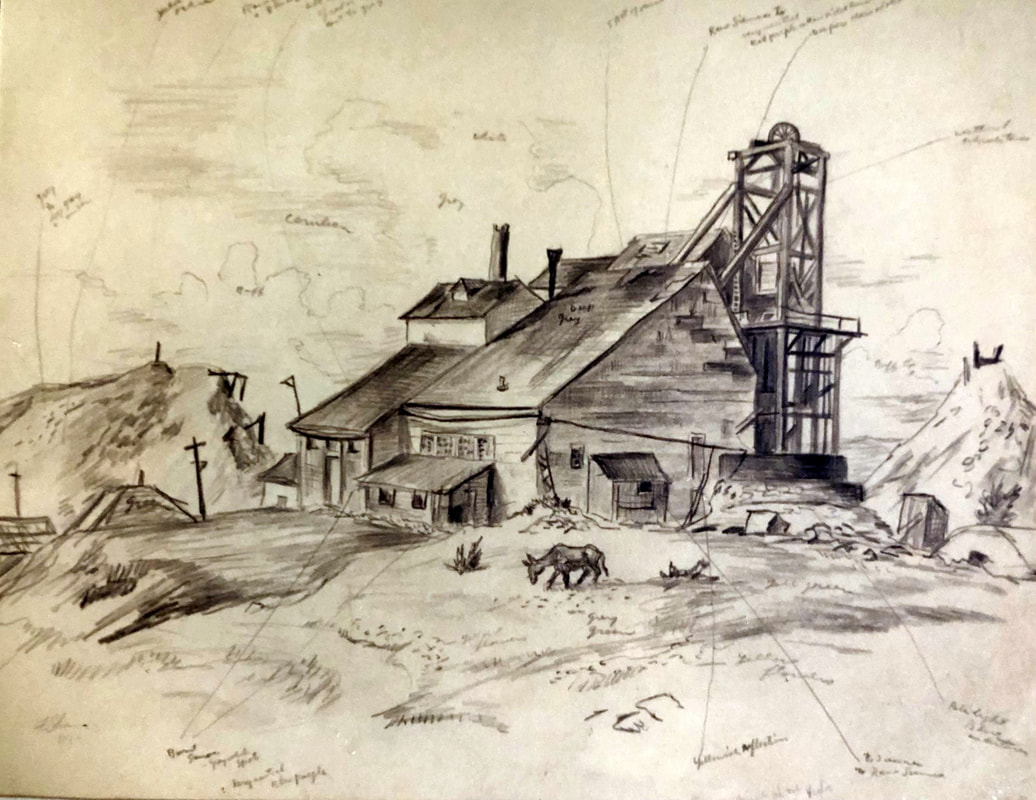 VIEW #2 -- Related sketch of "Old Mine" in Victor circa 1942 by Fred Shane shared by Claudia Lohnes. Lines connect the artist's notes about various parts of the sketch.
Additional comments from Gary Horton after seeing the sketch:​
​Click the highlighted links below for more information and photos. ​Email VictorHeritageSociety@gmail.com to share comments about what you see depicted in Fred Shane's artwork.
ABOUT THE ARTIST:

FREDRICK SHANE (1906-1990) was a regionalist, surrealist, muralist, and long-time teacher at the University of Missouri where he became head of the Art Department. [1]  In 1932 Shane began teaching at the University of Missouri at Columbia; he was appointed Art Department Chairman in 1958, and he retired in 1971. [1]  Influenced by American Regionalist painters, his paintings explored the beauty of the everyday, elevating abandoned and isolated scenery to expressive works of art. [3]  His early studies were in Colorado Springs and he often vacationed there. [4]
Frederick Emanuel Shane was born on February 2, 1906, in Kansas City, Missouri. He began painting portraits and landscapes at the age of eight, and by age seventeen he was enrolled at the Kansas City Art Institute. [3]  In the summers of 1925-26 Shane studied at the recently-founded Broadmoor Academy in Colorado Springs. The Academy was established in 1919 by Spencer and Julie Penrose, prominent philanthropists and art patrons, who donated their family residence for the creation of a local art institution. [2]  From 1939 to 1944, Shane summered in Colorado. [1]
His Colorado sketching trips resulted in drawings whose imagery appeared in some of Shane’s prints and paintings, such as his oil on canvas, Owen’s Bookstore, Victor, Colorado (1942). [2]  Some of his most notable paintings of the 1940's depict Colorado subjects in his consummate regionalist style. [2]
Fredrick Shane developed a unique painting style focused on everyday subjects. He was drawn to abandoned mining towns, isolated rural landscapes, and scenes of working-class urban life. [3]  Thanks to Claudia Lohnes for sharing photos of her grandfather's paintings and artworks depicting Victor, Colorado in the 1940's!   This represents only a small portion of a large collection of paintings for which he is known and have been exhibited at the Whitney Museum of American Art in New York, the Corcoran Gallery in Washington, D.C., the New York World's Fair, the State Historical Society of Missouri, and many other major venues. [3]

1.  ARTFIXdaily.com, Oct 10, 2010. https://www.artfixdaily.com/artwire/release/936-fred-shane-paintings-1928-to-1980
2.  1stdibs.com,  https://www.1stdibs.com/creators/frederick-shane/art/
3.  Missouri Artists,  https://www.1stdibs.com/creators/frederick-shane/art/
4.  Invaluable.com, https://www.invaluable.com/auction-lot/fred-shane-1906-1992-pencil-signed-lithograph-108-c-09240598f9
In  1999 a nonprofit organization known as "Victor Celebrates the Arts" was formed to sponsor an annual En Plein Air Art Show & Sale each Labor Day Weekend that typically attracts 50-60 artists from around the county who paint on-site within a 10 mile radius of the Victor City Hall.  For over two decades the participating artists have been painting various scenes in and around Victor and at many nearby legendary 1890's gold mining sites.  Among many the Juried and Special Awards, the Victor Heritage Society sponsors two annual awards for paintings that best represent Victor's Heritage.  Perhaps at some future date the work of some of these artists will be curated and commented on for their ability capture and preserve the historical character of the area as it still existed in the early 21st Century?
Some people say,
"In a small town there is not much to see, but what you hear makes up for it."
In historic Victor, Colorado there is plenty to see and hear.
Come take a look--and a listen!

Click Here to View a Booklet:  Guide to Preserving Our Architectural Heritage