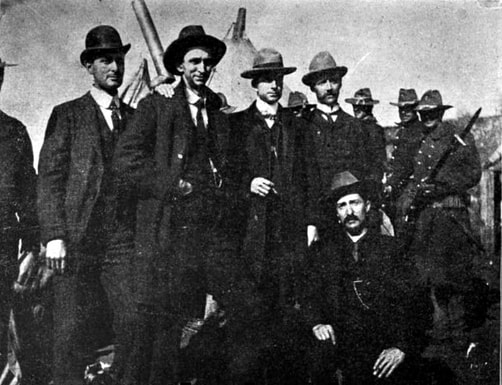 1894 STRIKE
The first labor war was triggered by a union strike in 1894 over wages and the number of hours miners worked per day.  Two men were killed in a gun battle between striking miners and sheriff’s deputies.  The strike was finally settled in favor of the union when the mine owners agreed to pay the miners $3 for an eight-hour day.
​
1903-04 STRIKE
The second labor war began in 1903.  The Western Federation of Miners Union called upon miners in the Gold Camp to strike in sympathy with smelter workers in Colorado City who earned just $1.85 per day.  With 3,500 to 4,000 workers on strike in the Gold Camp, most mining operations came to a halt and all hell broke loose.
Several mines attempted to reopen with non-union labor and violence erupted.  At the Independence Mine, fifteen men fell to their deaths when someone tampered with the shaft guides.  A bomb at the Vindicator Mine killed two more men.  Trains carrying non-union men were wrecked.
To stem the violence, Colorado’s governor placed the Gold Camp under martial law and by September 1903, over 1,000 National Guard troops occupied the camp.  During the six month occupation, hundreds of union members and sympathizers were rounded up and imprisoned in “bull pens” while others were ordered out of the District.
Near midnight on September 29, 1903, Editor George Kyner of the Victor Record and some of his staff were arrested and marched off to an outdoor "bull pen".  Mrs. Kyner and Emma Langdon (wife of the lynotype operator) defied the militia and got the paper out on time the next morning with the headline "Somewhat Disfigured, But Still In The Ring".  After Editor Kyner and his staff were released, the paper was placed under censorship for pro-union sympathies. When the troops were withdrawn in the Spring of 1904, violence erupted again.
​     Shown below are photos from the Madonna & Ellis Family Album that document many of the tragic events which led to the end of the strike by the Western Federation of Miners Union in 1904.  Click Photos to Enlarge.

Independence Depot Explosion.   On June 6, 1904, a depot where non-union miners were waiting for a train at the Town of Independence (north of Battle Mountain) was blown up.  Thirteen men were killed and many others were injured.  Years later, Harry Orchard, a henchman for the W.F.M. Union confessed to the crime.  But other evidence indicates Harry Orchard also worked with Pinkerton Agents hired by the Mine Owners to discredit the Union.  No W.F.M. Union officials were ever found guilty  of conspiring to direct Orchard's violent activities.
​     Riot in Victor, Union Properties Ransacked.  The day after the Depot in Independence was blown up, the Mine Owners Association and their Citizens' Alliance organized a rally in Victor to place blame on the W.F.M. Union.  The anti-union rally was held in a vacant lot on the corner of Victor Avenue and North Fourth Street.  Shots rang out, two men were killed, and others were injured during the ensuing riot.
Twelve-year-old Lowell Thomas watched the melee from the second story window of the Boston Clothing Building (currently called the Victor Mall Hotel) where the medical offices of his father were located.  Despite the danger, Dr. Harry Thomas ran to the street, carried a wounded man to his office, operated and saved the man’s life.
Union members fled up 4th Street to the W.F.M. Union Hall.  Bullet holes resulting from a gun battle between the union and anti-union forces can still be seen on the front of the beleaguered building.  Occupants of the Union Hall eventually raised the white flag of surrender.  The Union Offices on North 4th Street and the Union Cooperative Store on Victor Avenue were ransacked. 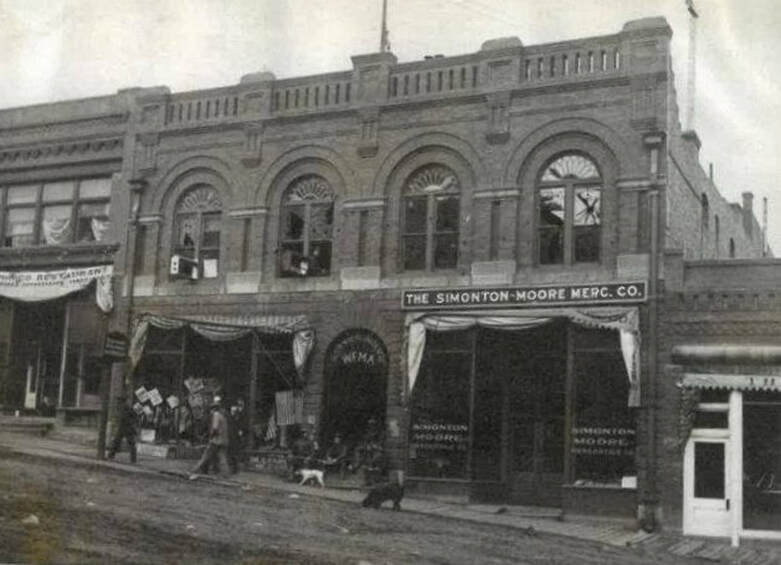 Union Hall Occupied. After the attack and occupation of the building, windows for the 2nd-story union offices were shattered by gunfire and men with rifles blocked the center staircase entrance. A man with a rifle appears to be sitting in a broken 2nd- floor window. The street level businesses appear to be unaffected.
Union Members Arrested, Martial Law Reimposed.  Union members and sympathizers were arrested and confined in the basement of the Armory (currently the Victor Elks Lodge) and in outdoor "bull pens".  The Governor sent the Militia back to the Gold Camp which was again placed under martial law.  The press was silenced, freedom of speech and assembly were abolished.  ​
Newspaper Office Ransacked, Union Sympathizers Deported.  Two days after the riot, on June 8, 1904, the Victor Record Newspaper was raided again.  This time the printing presses and linotype machines were destroyed.
Union members and sympathizers were again herded into “bull pens”.  This time 225 men were deported without trial—shipped off in railroad box cars to the Kansas and New Mexico borders where they were dumped with orders not to return to the Gold Camp.  Lt. T.E. McClelland, replying to an accusation that the military had violated the constitution, said “To hell the constitution.  We aren’t going by the constitution.”
Western Federation of Miners Union Defeated.  Within a few days the 1903-04 labor war ended and the W.F.M. Union was driven from the Gold Camp.  The mines started up again and organized labor was totally defeated.  Miners were allowed to work only if they had identification cards from the Mine Owners Association saying they were not affiliated with the union.  From June of 1904 until the present, there has been no union representation for miners in the Gold Camp.
​​
​ABOUT THE CONTRIBUTORS:
Thanks to Rose Noal, Cathy Shafer, Joe DiRito and Tony DiRito who generously donated this photographic memorabilia to the Victor Heritage Society so it could be preserved and shared with the public.  The photos came from their relatives who once lived in Victor--Joe & Viola Madonna, their grandparents, and Griff & Mollie Kate Ellis, their great uncle and aunt.
At one time Griff & Mollie Kate (Herman) Ellis lived in the distinctive home at 714 Victor Avenue which they owned from 1915-21.  This house has been recognized with a Landmark Award by the Victor Heritage Society.  Griff Ellis was a shift boss at the Portland Mine and a leaser at the Ajax Mine. ​
Joe & Viola Madonna lived upstairs at 306 Victor Avenue and ran the pool hall downstairs.  Joe Madonna, was born in 1905.  He was employed as a "machine man" at the Cameron Gold Mine when he registered for WW II in 1940.
In more recent times, businesses that have occupied the Madonna's building include the Amber Inn Restaurant, Someplace Else Bar & Restaurant, Sally's Bar & Restaurant, and the Headframe Tavern.
Notes:
CLICK HERE FOR LINKS TO MORE PHOTO GALLERIES
FEATURING VICTOR & THE WORLD'S GREATEST GOLD CAMP
THE PAST MATTERS.  PASS IT ALONG.
The Next Generation Will Only Inherit What We Choose to Save and Make Accessible.
​
Please Share Your Photos and Memories of  Victor & the World's Greatest Gold Camp by
Contacting Victor Heritage Society, PO Box 424, Victor, CO 80860 or e-mail VictorHeritageSociety@gmail.com.