Before the advent of large scale surface mining, the landscape of the Mining District between Victor and Cripple Creek was dotted with the relics and ruins of four to five hundred underground gold mines that employed thousands of miners all living within a short trolley ride or walking distance from the mines.  This photo gallery provides a glimpse of what once was, and what still remains of the more prominent historic underground gold mines near Victor, Colorado.
​ 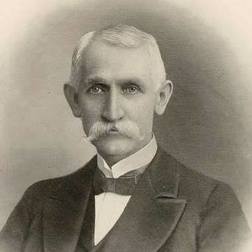 On July 4, 1891, Winfield Scott Stratton staked the claim for his aptly named Independence Mine.
STRATTON’S INDEPENDENCE MINE
By La Jean Greeson

​     Winfield Scott Stratton staked his claim for the Independence Mine on July 4, 1891 in the newly formed Cripple Creek Mining District on the southern slope of Battle Mountain not far from where the City of Victor would soon be established.
On the same day, Stratton also staked a claim for his nearby Washington Mine.  For 17 years before discovering the Independence, Stratton had worked as a carpenter in Colorado Springs during the winters—in order to accumulate enough money to spend his summers prospecting for gold. 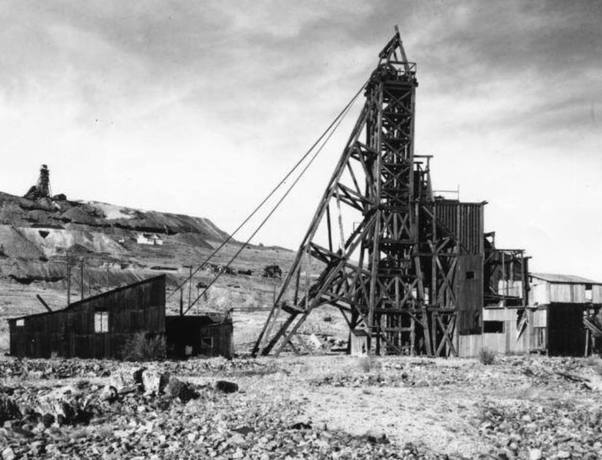 Historic headframe and ancillary structures remaining at Stratton's Independence Mine, Circa 1965. Although taken over 75 years after Stratton began developing the Independence Mine, this photo may accurately depict what the site looked like before more massive mining and milling infrastructure was constructed there. See photos below.
After spending two years raising development money, Stratton had become disheartened so he optioned the Independence to L.M. Pearlman in 1893.
While doing one last walk through before relinquishing control, Stratton came upon a rich vein of ore in an abandoned section of the mine and concealed it as best he could.
Stratton sweated out the thirty day option period hoping Pearlman would not bother to search the abandoned cross cut.
Lucky for Stratton, Pearlman remained unaware and decided to relinquish his option to buy the Independence.
Although there were other gold strikes in the Cripple Creek Mining District prior to Stratton’s, his is considered the strike that put Victor and the Mining District on the map.  In 1894 Winfield Scott Stratton became the first millionaire to come out of the District.
Stratton was very secretive about his mining operations, never allowing visitors and discouraging his men from speaking of their jobs outside of work.  He also limited production to $2,000 to $4,000 a day, considering the gold in ground as his insured bank.
In 1899 Stratton sold his Independence Mine, with the help of Verner Z. Reed, for $11 million in stock options to The Venture Corporation, a London based company for which he continued to sit on the Board of Directors. The new company was incorporated in England in 1899 as the “Stratton's Independence, Limited”.  A description of the operations at that time is shown below. 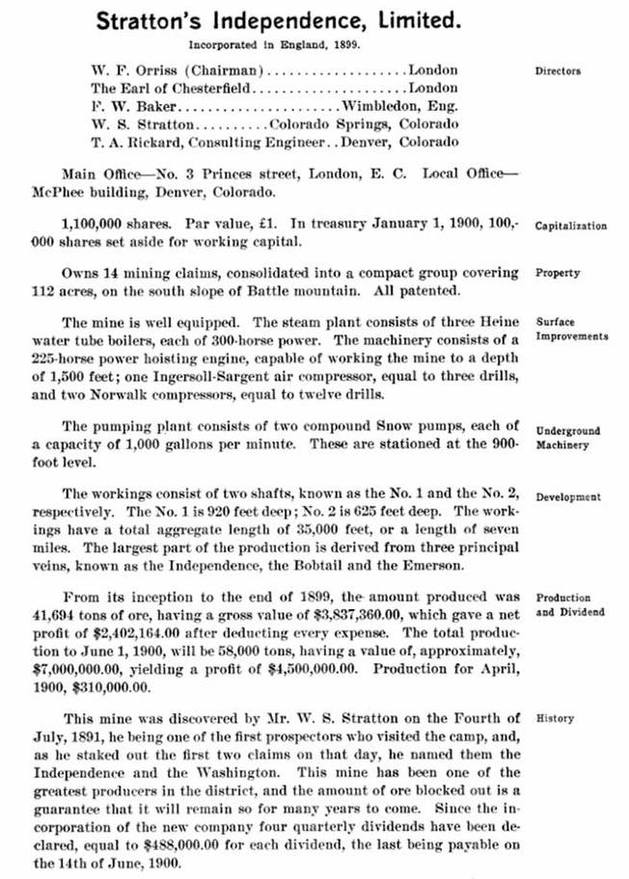 While Stratton continued to be active in other parts of the Mining District, his health was failing.  Stratton passed away September 14, 1902. 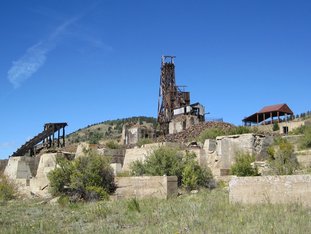 The historic headframe for Stratton’s Independence Mine, located on the Northeast edge of the Victor at an altitude of 9780 feet, was listed on the National Register of Historic Places in 1993 (one of four Victor sites listed).
Ruins of the adjacent abandoned ore processing mill have been converted into an outdoor arena for community events.
​     The sites of Independence Mine and Mill can be viewed alongside a system of hiking trails sponsored by the Southern Teller County Focus Group and the Cripple Creek & Victor Mining Company; as well as an official year-round Volksmarch Hiking Trail.
Postscipt on Restoration of the Independence Mine Headframe:  In recent years it became increasingly apparent that preserving the structural sustainability of the historic headframe towering over the site of Stratton's Independence Mine required a major restoration project.  The final stages of that project were completed in 2017-18 when segments the massive headframe were taken down with huge cranes, strengthen and reassembled.  CLICK HERE FOR AN ARCHIVE OF AMAZING PHOTOS, CONTRIBUTED BY SHIRLEY BEACH, THAT DOCUMENT THAT PROCESS.
Compiled and submitted by La Jean Greeson, February 2017.  Sources:
ABOUT THE AUTHOR:
La Jean Greeson's family ties to Victor and the Mining District originate before 1900 when her great-great grandparents came to the area.  Her grandparents, Buster and Emma Peters, became first-time homeowners in 1940 at 107 Portland Avenue in Victor where their children, Gladys (La Jean's mother) and Pepper, were raised into their teenage years.  Bus worked underground in the Vindicator Mine and helped construct the Carlton Mill for the Golden Cycle Corporation.  But frequently he was obliged to seek employment opportunities outside the District--Hawaii (for a tunnel job), and Grants, New Mexico (a uranium mining boom town where he started a welding business). In 1956 the Peters family moved permanently to New Mexico, but returned for visits to their Victor home into the 1970s.  La Jean grew up hearing their stories and developed a passion for Victor history that has blossomed into a Facebook page featuring historic photos.
La Jean now lives in Bremerton, Washington and visits Victor as often as possible.  As an active Victor Heritage Society member, La Jean has generously volunteered to serve as our Family Research Coordinator, and to spearhead coordinating the research and photos for this Gallery of Historic Underground Mines near Victor.

Contact VHS or La Jean Greeson to share early photos of historic underground gold mines near Victor, or to share a story about someone (perhaps a relative) who worked in the underground mines.
THE PAST MATTERS.  PASS IT ALONG.  The Next Generation Will Only Inherit What We Choose To Save.
Some people say,
"In a small town there is not much to see, but what you hear makes up for it."
In historic Victor, Colorado there is plenty to see and hear.
Come take a look--and a listen!

Click Here to View the Story of the Vindicator Mine

Click Here to View a Booklet:  Guidelines for Preserving Our Architectural Heritage
​