The Lighter Side of a Visit to Hack's Victor Barbershop by Charles Norman Spray (AKA Jeep Hack). ©
​     My grandfather Henry Cleveland Hack, affectionately known by family and friends as Pops, had a barbershop in Victor, Colorado before and after WWII.  Hack’s Barbershop was located at 307 Victor Avenue, in the smallest storefront part of the Doyle Block which later became Doc Denman’s office.  The largest storefront in the building was once occupied by the old Gold Coin Café (before it relocated to the corner of 3rd & Victor Ave) and subsequently by the Silver Dollar Café & Saloon. 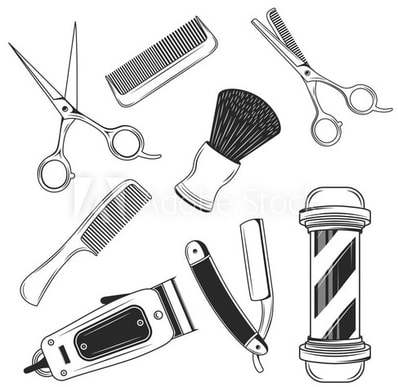 One day a stranger walked into Pops' shop and requested a haircut.  The shop was crowded with retired miners, the unemployed and loafers just biding their time telling tall tales about gold yet to be found, the big trout they caught out at Skagway, the weather, etc.

Pops told the man to hop right in the chair, that he was next.  As Pops proceeded to cut the man’s hair, one of the group of local rascals, Moody Wilkins, said “Henry, I heard you went fishing with Hap Mendenhall and stretching the law a little, caught some really nice fish."

Now Pops, like his second cousin Will Rogers, loved to talk and tell stories and jokes--something barbers seem to be afflicted with and Pops was no exception.  In great detail, Pops proceeded to tell the group and the quiet man in the chair just how Hap and he had sneaked into this place called Seven Lakes.

Even though you weren’t supposed to fish in these lakes, a lot of the locals did.   The trick was not to get caught.  Getting caught meant being hauled into Cripple Creek and fined.  To keep from getting caught, you didn’t fish until you looked to see if the caretaker across the lake was present and around his house, or possibly in the process of driving up to the other lakes, checking them out, etc.

​     Then, while one person kept an eye out to see if the coast remained clear, it was okay to start fishing.  The lakes, not fished legally since the early 1900’s, were teeming with beautiful two pound Cut-Throat Trout and nearly every cast yielded a fish.  In a short time you had all the fish you could carry and then proceeded to make a hasty retreat off the mountain. 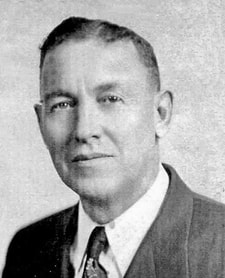 Henry C. Hack, Sr. (Pops), 1958 photo shared by grandson Charles Spray (AKA Jeep Hack).
Pops finished his story and the man's haircut.   The man paid Pops, thanked him for the haircut and the interesting story, then with a slight smile and a twinkle in his eye, he bid Pops good-bye and left the barber shop.

When he was safely out the door the crowd in the barber shop came unglued with roars of laughter.  Pops confused said, “What did I do or say?”

Moody said, “HENRY, the man you just gave a haircut to happens to be McReynolds, the caretaker at Seven Lakes."
​
In later years when McReynolds would come into town and get a haircut with that same twinkle in his eye he’d ask “Henry, been doing any fishing lately?”
"The Lighter Side of a Visit to Hack's Victor Barbershop" (submitted February 2020) by Charles (Chuck) Spray (AKA Jeep Hack). ©

​Click below for companion stories by Chuck Spray (AKA Jeep Hack): ​
ABOUT THE AUTHOR
To discover why Charles Norman Spray was also known as Jeep Hack by his family and friends while growing up in Victor,  click this highlighted link to his "Recollections of Life in Victor During the Great Depression, World War II and After".
​     Charles (Chuck) Spray  included this preface titled “ THE WHY OF IT ” with his more personal memoirs submitted in December 2019.  My daughter who was always telling me “Dad, write down some of the stories you are always telling me.”  But I’d continue to procrastinate.  Finally, to appease her I started writing.  The more I continued to write, the more that came to light.  Sometimes I’d worry about how to start and just how or what I wanted to say.  Then I’d remember what that renowned writer of western tales Louis L’Amour once said.  “Don’t wait for an idea.  Don’t wait. Just Write”!  He also was to have said another verbal truth, “You have to turn on the faucet before the water starts to flow”!  “Just Write”.
Bear with me.  I hope you have the time or inclination to put up with the ramblings and recollections of a world weary old man.  Perhaps in the telling I’ve stirred up a few recollections you might have of your own life.  Put them down.  Don’t wait.  Write them down for your grandchildren and their grandchildren to follow.  The children of today need to know that some things weren’t always the way they are today--things that will never be in the history books nor be taught in the schools, things that made up your life.  It’s important they know of the world you knew, what took place before I-Pods, texting, and the abuse of one of man’s greatest inventions, television.
Please forgive my grammar, spelling, punctuation and over-all abuse of the English language.  The Cherokee people have no word in their language for goodbye, so I’ll just say “Happy Trails” until we meet again.
Chuck Spray
THE PAST MATTERS.  PASS IT ALONG.
The Next Generation Will Only Inherit What We Choose to Save and Make Accessible.