Editor's Note:  If you do not already know why Charles (Chuck) Spray was also known as Jeep Hack by his family and friends while growing up in Victor, you may want to click on this highlighted link to his "Recollections of Life in Victor during the Great Depression, World War II and After" -- shared in December 2019. This much briefer companion piece is organized around a poem by an unknown author which articulates some of the hopes, dreams, and concerns many parents have when their children first begin attending school.
​     By way of background, Charles Spray was born in 1935 and soon after his family moved to Victor, Colorado.  His formal education began in 1941 when he attended first grade at the old Washington Elementary Schoolhouse which was located on the SW corner of Portland Avenue and Second Street.  This magnificent old school survived the August 21, 1899 fire that destroyed most of the Victor's business district.  But due to declining population, it was closed by 1944 and all classes were consolidated at the Victor High School.  After remaining vacant and deteriorating for many years, the Washington Schoolhouse was torn down in the 1960's.
​     The poem that follows was included in a booklet preserving Chuck Spray's childhood memorabilia.  It is accompanied by his photos of the Washington Schoolhouse, his teachers, and classmates.
"TREAT HIM GENTLY DEAR WORLD, HE'S MY SON" 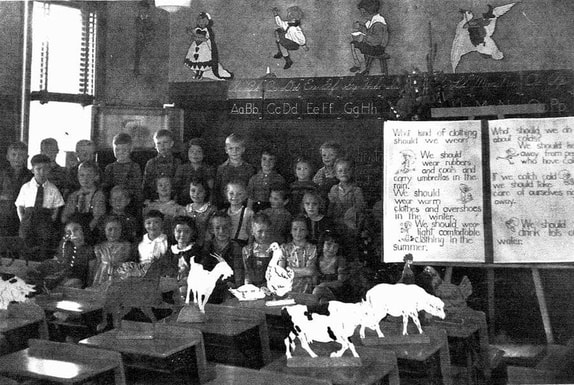 First Grade Class at the Washington School, Victor, Colorado, 1941. Charles Spray (AKA Jeep Hack) is seated directly behind the "goat cut-out". Photo shared by Nancy Galbraith.
This morning he’s going to walk down the front steps, wave his hand and start out on the great adventure.  It’s an adventure that might take him across continents and across oceans.  It’s an adventure that will probably include wars, tragedy and sorrow.  To live his life in this world he will have to have faith, love and courage.

​​     So World, I wish you would sort of look after him.  Take him by the hand and teach him things he will have to know.  But do it gently if you can.  He will have to learn.  I know that all men are not just, that all men are not true.  But teach him also that for every scoundrel there is a hero.  That for every crooked politician there is a great dedicated leader.  Teach him that for every enemy there is a friend.
Teach him if you can, how to laugh when he’s sad but teach him there is no shame in tears.  Teach him there can be glory in failure and despair in success.  Teach him to scoff at cynics and to beware of too much sweetness.  Teach him to sell his brains and brawn to the highest bidder, but never to put a price on his heart and soul. Teach him how to close his ears to a howling mob, but stand and fight if he thinks he’s right.

Let him be no other man’s man.  Teach always to have sublime faith in himself because then he will always have sublime faith in mankind.
​
This is quite an order but see what you can do.  He’s such a nice little fellow, My SON!
Poem by unknown author titled "Treat Him Gently, He's My Son" as well as photos related to attending the Washington Elementary School in Victor, Colorado submitted by Charles (Chuck) Spray (AKA Jeep Hack) © -- January 2020.
​
CLICK below to view companion stories by Charles Spray (AKA Jeep Hack): ​
ABOUT THE AUTHOR

Charles Norman Spray (also Known As Jeep Hack) included this preface titled “ THE WHY OF IT ” with his more extensive memoirs submitted in December 2019.  My daughter who was always telling me “Dad, write down some of the stories you are always telling me.”  But I’d continue to procrastinate.  Finally, to appease her I started writing.  The more I continued to write, the more that came to light.  Sometimes I’d worry about how to start and just how or what I wanted to say.  Then I’d remember what that renowned writer of western tales Louis L’Amour once said.  “Don’t wait for an idea.  Don’t wait. Just Write”!  He also was to have said another verbal truth, “You have to turn on the faucet before the water starts to flow”!  “Just Write”.
Bear with me.  I hope you have the time or inclination to put up with the ramblings and recollections of a world weary old man.  Perhaps in the telling I’ve stirred up a few recollections you might have of your own life.  Put them down.  Don’t wait.  Write them down for your grandchildren and their grandchildren to follow.  The children of today need to know that some things weren’t always the way they are today--things that will never be in the history books nor be taught in the schools, things that made up your life.  It’s important they know of the world you knew, what took place before I-Pods, texting, and the abuse of one of man’s greatest inventions, television.
Please forgive my grammar, spelling, punctuation and over-all abuse of the English language.  The Cherokee people have no word in their language for goodbye, so I’ll just say “Happy Trails” until we meet again.
Chuck Spray
THE PAST MATTERS.  PASS IT ALONG.
The Next Generation Will Only Inherit What We Choose to Save and Make Accessible.