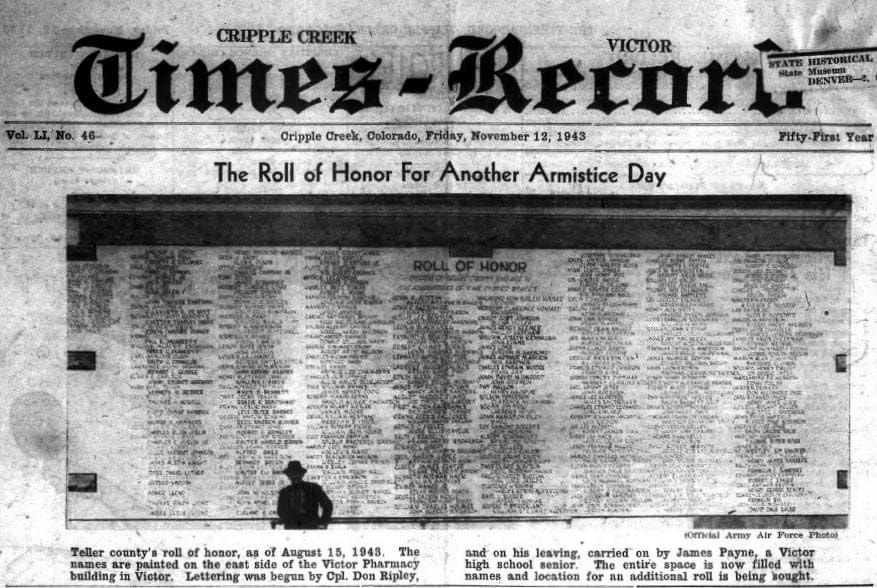 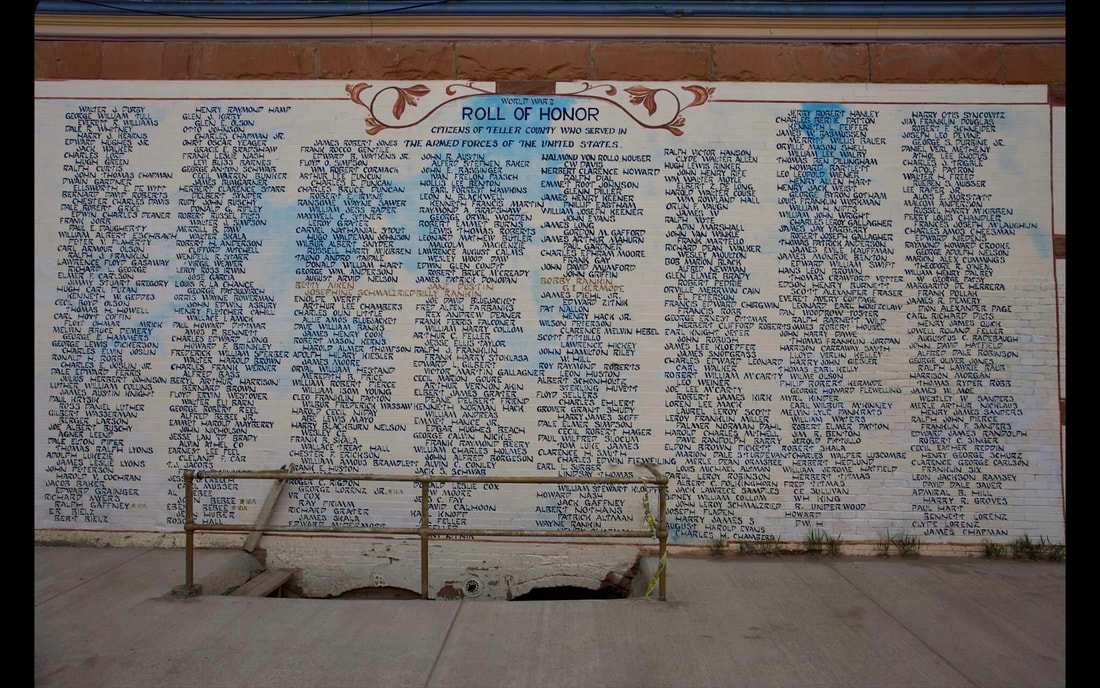 The original WWII Veterans Wall of Honor on the wall of the Monarch Block was repainted and expanded several times. Shown here is one of the later versions which was painted over by the current owner of the building in July of 2020. A new more permanent WWII Veterans Memorial was dedicated in Wallace Park on July 18, 2021.
The girl next door had moved away to Woodland Park.  She wrote me a letter from there, thanks to her adoptive mother, Annabel.  Sometimes our basketball team played against Woodland Park, so I was able to see her when our team played there.  Later, I would bum a ride with the Rainbow Bread man who delivered to Victor and Cripple Creek.  I would write to Charlotte about every day, and I helped her with her home economics class by typing her assignment, a bunch of recipes.  Of course, the typewriter I used didn’t match the one at her school.  I met the home economics teacher and she joked about it, a real nice and understanding teacher!
When Charlotte and I married on January 15, 1944, there was a blizzard; extremely cold with snow blowing across the highway.  I was waiting for the stage (a station wagon) to bring Charlotte and her parents to Harshbarger’s store downtown.  The stage arrived and announced they had let Charlotte and her family off at Mr. and Mrs. Johnson’s house where we were to be married, about four blocks away.  I had a bunch of roses to give Charlotte and they didn’t stand the weather too good as I fought my way through the storm to the Johnson house.  The preacher almost married Charlotte to my best man, Rex Johnson!  My other best friend, Robert Eccher was on hand to photograph the whole event.  The wedding was wonderful, but the pictures Robert took when developed were all fogged up so there isn’t any photographic evidence that we got hitched.
We spent our honeymoon night at the local hotel.  The next morning, we had hot chocolates at Harshbarger’s store.  Charlotte spilled her drink on her lovely dress.  After that, we went to stay with my mom, Josephine and Tony Kelso, her husband until we found a nice apartment on the hill.  It had an electric stove, and we heated a lot of soup and cooked some apples in the oven. There was a table tennis set in the lower floor by the washing machine and we played many games together.
Although I had plenty to do, I decided to print my own newsletter, called “The Tattler”, which I printed out using a gelatin pad.  It sold for a penny a copy and contained the latest school activities.  As a result of this, I received a book as an award from the school for extra activity. The title of the book was “I Dare”, which encouraged one to always do better.  It was nice of them.
"Memories of James Garth Payne & How He Came to Letter Names on the Original WWII Roll of Honor in Victor and Cripple Creek, Colorado" (submitted September 2021) by Marjorie Payne (daughter-in-law).

Concluding Note:  The Teller County World War II Roll of Honor that for 77 years graced the wall of the Monarch Block at the corner of Victor Avenue & Third Street was painted over in 2020 by the new owner of the building.  A new, more durable WWII Roll of Honor was constructed in Wallace Park (corner of Victor Avenue & Second Street) and dedicated on July 18, 2021.  Click highlighted LINK for details about the new memorial.
THE PAST MATTERS.  PASS IT ALONG.
The Next Generation Will Only Inherit What We Choose to Save and Make Accessible.