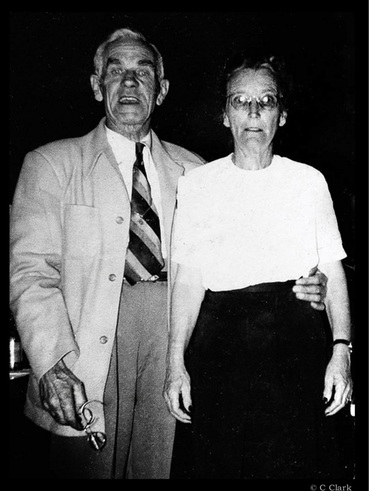 One of Victor’s most beloved and appreciated characters was not a resident of our town, but lived in Cripple Creek.  His given name was Ernest T. Sly, but everyone knew him as “Pop” Sly.  He was our sterling bandmaster and serviced both Victor and Cripple Creek schools for many years.

Pop’s background was as interesting as his character.  He was born and raised in England and came to the U.S. as a prospective trumpet player for the well-known and famous band director, John Phillip Sousa.  Pop’s wife had asthma and Pop decided it was necessary to move from Washington, D.C. to a drier climate.  He eventually ended up in Colorado Springs, and subsequently, in Cripple Creek where his wife did not suffer severely from her disease.

Pop was a dashing figure of a man with his sparkling eyes, his quick grin, and his silvered hair.  Everyone thought the world of Pop.  Pop passed on his enthusiasm and talent for conducting and introducing a group of neophyte young people to the music Pop himself loved.  His choices covered a menu of well-known composers from Respighi to Sousa.  His devotion to his profession transferred to his students and soon the ragtag group that at first did not know which end of an instrument to blow in, became proficient musicians.

Pop gave many concerts for the miners, businessmen, and wives in the district.  In Victor these were given in the auditorium (Miners Hall) to very receptive audiences.  There were usually a number of performances during the year including a Christmas concert that included hymns and carols (before these things were forbidden).

The band was sometimes accompanied by the Flanagan sisters or by instrumentals.  For the size of the schools, the band was huge.  Over 80% of the total enrollment of the school was a member of the band.  Each Monday night, the combined band practiced in a building near the Elks Hall in Cripple Creek.  Rivalry between the two towns seemed to disappear in Pop Sly’s band.  Students loved Pop and were quiet and attentive when he spoke.  Reverence morphed into excellence.

The band was a focal point of the curriculum.  Each school had a band room where they practiced each day. The band room at Victor High was in a small house on the east side of the high school.  Before that, it was held in the cafeteria.

Many trips were taken during this time i.e. Band Day at Colorado University, Apple Blossom Day in Canon City, concerts, individual performances, and individual competitions at the Vail Hotel in Pueblo.  Pop Sly’s band took top honors most of the time as both a concert band and as a marching band.  Pop was a consummate musician and showman in every sense of the word.

One sad day, news came that Pop had passed away of a heart attack.  Both towns were in shock.  Many souls wept for weeks.  The towns of Victor and Cripple Creek were never the same.  One can still hear echoes of the extraordinary bands Earnest T. Sly produced.  Wherever you are, Pop, you are still making glorious music!
© Charles Clark
​ABOUT THE AUTHOR:
Charles (Chuck) Clark was born in Colorado Springs, Colorado in 1933.  His father was a grocer and his mother was a teacher.  He was raised in Victor, graduated from Victor High School in 1951, and four years later graduated from the University of Colorado with a degree in English Literature and a Commission as an Ensign in the U.S. Navy.  Later he received a Masters Degree from Colorado College.
After his service obligation and becoming a pilot, Chuck was a teacher, probation officer, photographer, marketing manager and vice president of several companies.  He traveled to Peru twice and accumulated and sold numerous photographs of the Amazon and its indigenous people.  In 2011, he was elected a Member of the famed National Explorer's Club headquartered in New York city.  He is the second Victorite to gain membership in the exclusive Explorer's Club.  The first was Lowell Thomas.
Chuck recorded many of the experiences he had as a child in Victor in a 2011 book titled "Memories of a Wonderful Childhood in Victor, Colorado" -- which can be obtained from the gift shop of the Victor-Lowell Thomas Museum or ordered online.   This memory of "Pop Sly -- Ernest T. Sly, The Band Man" (not included in his book) was submitted in November, 2015.​
THE PAST MATTERS.  PASS IT ALONG.
The Next Generation Will Only Inherit What We Choose to Save and Make Accessible.
​
Please Share Your Memories and Family Connections to Victor & the World's Greatest Gold Camp by
Contacting Victor Heritage Society, PO Box 424, Victor, CO 80860 or e-mail VictorHeritageSociety@gmail.com.
CLICK HERE FOR MORE MEMORIES AND STORIES OF FAMILY CONNECTIONS TO VICTOR & THE WORLD'S GREATEST GOLD CAMP.