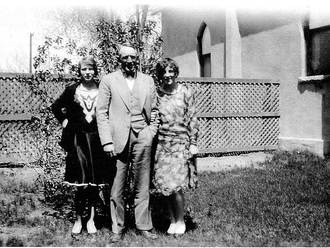 A woman named Marguerite was born in Aspen, Colorado but moved to Victor as a young girl.  She came with a sister Adelaide, a mother and a miner father.  Hopes were great that they would have a good job and an easier life than that life in Aspen.

That life turned out, though, to be much more difficult than expected.  Marguerite’s mother died during the flu epidemic of 1918 and left Marguerite with a younger sister and a father for whom to care.  They lived in a small house on South 5th Street and when miners were paid $5.00 a day there was not a lot of money to go around. They were a bit more fortunate than many miners in as much as her father had several years experience as a hoist man even though he was in his twenties.

His first steady job at seventeen was as a hoist man on the Smuggler Mine in Aspen and he had a good reputation for being a good worker and for always showing up on time even though some of his evenings were filled with heavy living.  Money was scarce, but many miners frequented the bars as daytime and work was hell on earth and drink helped to ease the pain for some.  It was often and regularly difficult on the dependents, however, as there was little money available for the necessities such as food, clothing, and shelter. 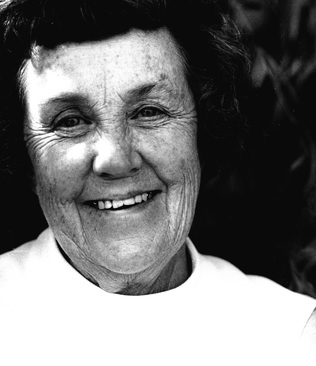 Marguerite (Richmond) Clark, wife of Charlie Clark .©
Marguerite somehow survived this life as a young girl and eventually married a grocer and raised three sons. She spent several years as a teacher in the CCV schools working to help her students succeed in their life pursuits.  Should you ask her students, you will surely get some positive comments.  She spent hours after school to do this, much to the anxiety of her family and the school bus driver.  When the schools were consolidated, Cripple Creek was the location for both Victor and Cripple Creek students. This was much to the dismay of the Victorites!

Marguerite spent most of her life trying and generally speaking, to upgrade Victor and its residents.  The one circumstance that caught my attention was an incident that occurred on a beautiful day after Marguerite had moved to Colorado Springs.  Charlie bought a nice home on Templeton Gap.  She now had modern appliances such as a dish washer and appliances that worked on 60 cycle electricity, a television with many channels, a furnace that heated with natural gas, all of which had been absent in her life in Victor.

She and Charlie went to town to shop and parked near Acacia Park.  While walking through the park, she encountered an older woman crying on one of the benches.  The woman, whose name was Virginia, related that her son had told her to get out of the house and not to come back.  Virginia was horrified by this, as she had no other place to stay and decided she would sleep in the park until she could find some other place to rest.  She also had a serious physical problem (liver failure) and was on dialysis and hadn’t been able to keep her appointment at Penrose Hospital.  She was two days late for her treatment and was near death if not able to have the dialysis treatment.

Marguerite did not hesitate and told Virginia to get in the car whereupon they drove post haste to Penrose Emergency and were able to get her an immediate appointment for dialysis.  Virginia still had a problem:  She had no place to live after her treatment.  Marguerite went to her church and rounded up some money and made arrangement for a motel room in which Virginia could stay until other arrangements might be made. Virginia survived that episode, but later died of her illness, much to the despair of Marguerite.

That one chapter in Marguerite’s life helped me to understand what an unselfish woman Marguerite was.  She gave clothes to those without and helped on many occasions those needy people in Victor.  Victor seemed to foster and showcase that type of person and made this writer so appreciative of Victorites for the rest of his life.
© Charles (Chuck) Clark
​ABOUT THE AUTHOR:
Charles (Chuck) Clark was born in 1933.  He was raised in Victor, Colorado where his father was a grocer and his mother was a teacher.  He graduated from Victor High School in 1951, and four years later graduated from the University of Colorado with a degree in English Literature and a Commission as an Ensign in the U.S. Navy.  Later he received a Masters Degree from Colorado College.
After his service obligation and becoming a pilot, Chuck was a teacher, probation officer, photographer, marketing manager and vice president of several companies.  He traveled to Peru twice and accumulated and sold numerous photographs of the Amazon and its indigenous people.  In 2011, he was elected a Member of the famed National Explorer's Club headquartered in New York city.  He is the second Victorite to gain membership in the exclusive Explorer's Club.  The first was Lowell Thomas.
Chuck recorded many of the experiences he had as a child in Victor in a 2011 book titled "Memories of a Wonderful Childhood in Victor, Colorado".  It can be obtained from the gift shop of the Victor~Lowell Thomas Museum or ordered online.   This memory of his mother, "Marguerite Clark -- One of Victor's Angels", (not included in his book) was submitted in February, 2016.​
THE PAST MATTERS.  PASS IT ALONG.
The Next Generation Will Only Inherit What We Choose to Save and Make Accessible.
​
Please Share Your Memories and Family Connections to Victor & the World's Greatest Gold Camp by
Contacting Victor Heritage Society, PO Box 424, Victor, CO 80860 or e-mail VictorHeritageSociety@gmail.com.
CLICK HERE FOR MORE MEMORIES AND STORIES OF FAMILY CONNECTIONS TO VICTOR & THE WORLD'S GREATEST GOLD CAMP