Henry C. "June" Hack
Henry C. “June” Hack, Jr., son of Ina and Henry C. Hack, Sr., was born in 1916 in Labette, Kansas.  He grew up on a Kansas farm with five other brothers and three sisters.  The Hack family moved to Springfield, Colorado in 1929 during the height of the depression.  In 1933 they moved to Canon City, Colorado, and then up to Victor, Colorado in 1935.  After moving to Colorado, the family of Ina and Henry Hack would grow to include fourteen children--two died early, eight sons and four daughters lived to maturity.
In Springfield, June Hack met two men that were to have a profound effect on his life.  From a man named Otto Andrews he learned the Meat Cutting Trade.  From a noted regional boxer, a man named Dorsey Dun, he was introduced to the Fight Game.  June had his first fight in a ring at fourteen.  He continued to fight, having sixteen professional bout’s, losing but three.  He was never knocked out.  He was reported to have one of the best left hands in the business, and a devastating right hand as witnessed by a large majority of his fights being won by knockouts (most of them coming in the early rounds).​

June Hack, Contender for Colorado Welterweight Boxing Championship. Photo shared by Charles Spray.
​     Like Jack Dempsey, the Heavyweight Boxing Champion from Colorado, June fought in the “Smokers” in many of the mining camps like Fairplay and Cripple Creek where he fought four different times.  He fought in Colorado Springs, Pueblo, Canon City and up and down the Arkansas Valley in Lamar, La Junta and Springfield.  At age nineteen, having bested all the local competition in the State, June was known as the “Idol of Canon City” and the “Young Man with the “Wavy Golden Hair” when he fought in Colorado Springs for the Welterweight Championship of the State of Colorado.

Pop Hack (Henry Hack, Sr.) had starved and sweated June down, keeping his weight within the 148 pound Welterweight limit for the fight.  An imported opponent brought in for the fight was over the Welterweight limit (bigger and heavier at the Middleweight size) and should have been disqualified.  Pop Hack should have gone ahead and had the fight disqualified and stopped, but he didn’t.  He always said afterwards that his inaction had lost that fight for June before it ever got started.  With June insisting that the fight should proceed, Pops allowed it to continue.  June, going ahead with the fight, put his Middleweight opponent down in the first round, but didn’t finish him off.  In the second round of fighting without a mouthpiece (not really a piece of equipment in common use at that time) June took a blow to the mouth that busted out two teeth, severely cutting the mouth and causing severe bleeding.  When Pops couldn’t get the bleeding stopped, the referee stopped the fight and awarded the fight to the other fighter on a TKO (Technical Knockout).  June protested the fight being called, adamantly saying to Pops, “I can take that guy”, but the referee’s decision stood.

Like the Johnny Cash tune “A Boy Named Sue”, June was tough but he wasn’t mean.  He was a quiet, modest, unassuming man, respected and well liked by family and friends alike.

Prizefights were a popular sport in the 1920’s, 30’s and 40’s.  Carnivals that visited Victor in the summers would locate in the “Gold Bowl” ball park.  Along with the customary rides and the “midway games”, they generally featured a so called “Champion” fighter who offered a handsome sum to anyone who could stay three rounds with him in the ring.  On one occasion in 1941, with no one stepping forward to challenge the Champ, the crowd started yelling, “Get June Hack, Get June Hack”!  Located up town, Officer June Hack was reluctantly dragged down to the ball park where he stepped up to the ring, took of his shoes, put the gloves on and knocked the “would be Champ” out in the 1st Round.  The crowd was a little upset with June and the result, as they had chipped in to see a fight.  They had passed the hat around to get the $5 entry fee needed to enter him in the fight, but as it turned out there wasn’t any fight.  None!
Upon entering the service, June was sent to the “Great Lakes U.S. Naval Training Base” near Chicago, Illinois.  It was here that June would step into the ring for the last time.  Officers, after researching June’s past along with fellow class mates, were finally able to talk June into meeting the base champ (a Middleweight boxer who was an arrogant, cocky individual).  With no prior training to go up against the “Champ”, June put on his navy issued shorts, borrowed a pair of athletic shoes, stepped into the ring and proceeded to give the so-called Champ a lesson in “The Manly Art of Self-Defense”, knocking him out in the latter part of the first round.  June Hack was still good in the ring and he was still tough, very tough! 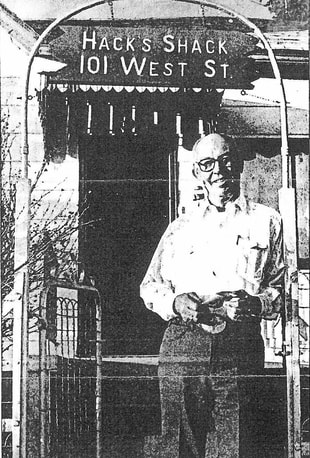 "Hack's Shack" -- Cripple Creek home of June & Margaret Hack. Photo shared by Charles Spray.
His tour of duty completed in 1945, June returned to Victor and spent the next twelve years living the quiet life there and in the District, leaving the Boxing Ring and his Naval Service behind.  He renewed his relationship with Margaret Ackelbein.  They were married in 1948, a marriage that would last for 63 years and be blessed with two children—a daughter Mary Ann and a son William.  June and Margaret purchased a home in Cripple Creek at 101 West Street—affectionately known as “Hack’s Shack” and located across the street from Margaret’s childhood home.  June worked at the Trading & Transfer Company driving heavy equipment.  Later he worked with Margaret’s father, Bill Ackelbein, mining in the Cresson Mine (AKA the Duke) near Victor.

​     In 1953 June and Margaret purchased the Cripple Creek Market at 2nd & Bennett Ave, a business they would operate for 25 years without a break!  The market became known for the quality meat cuts and products provided by the handsome meat cutter; as well as a smile from the friendly cashier, who on occasion would offer a bit of local news and gossip thrown in at no extra charge.  This dedicated couple never took time off for a vacation in the 25 years they operated their business.  They were devastated in 1977 when their store burned to the ground.  They rebuilt a store but nothing seemed the same after the fire.  They just didn’t have the heart to continue in the business after the loss of their original store, so they sold out and retired. 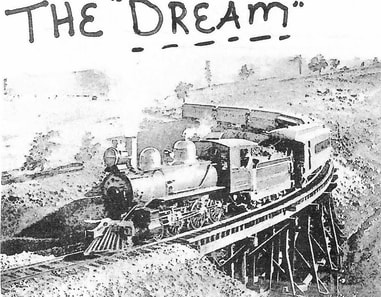 June Hack's Dream was to revive a tourist train traveling along the historic Short-Line Railroad bed (now known as Gold Camp Road) between Colorado Springs & the Mining District. Photo shared by Charles Spray.
Since moving to Cripple Creek June had become very active in civic affairs.  He served on the City Council and was elected Mayor, a position he held for several terms.  He did a lot for the community and helped to introduce many civic improvements such as updating the water and sewer lines, paving some of the gravel streets, etc.  Along with the mayors from the old Colorado mining towns of Blackhawk and Central City, June worked hard trying to get “limited stakes gambling” introduced in Cripple Creek and the two other mining communities, thinking it would revitalize the town’s dying economy.  It did!  Some of the changes it brought about have been hard to accept, but it’s provided jobs, increased visitor traffic, and increased local sales.  The greatly increased revenues for the city, county and businesses have been a Godsend for the local economy.

​     June had one lasting “dream”--a desire to try and revive a passenger train to run on the old Short Line Railroad bed (now called the Gold Camp Road) on the backside of Pikes Peak.  Like the Durango & Silverton Railroad in Southwestern Colorado, June thought a train ride that viewed some of the prettiest country in the world would be a big tourist attraction and a real boost to the District economy.  The ride, especially in the Fall, has one of the most breathtaking views of the Aspens anywhere in the State.  Heavy opposition to the dream came from some Colorado Springs people on the far West Side.  People with money poured thousands of dollars into an “opposition fund” and defeated the proposal.  While the proposed rail line would be legal and lawfully running on an old established rail bed involving but a small portion of land, none of it infringing on private property, the “opposition” didn’t want a noisy, smoking engine that once a day or so would run through their neighborhood.  So much more money and high priced lawyers put an end to the dream.  The day will come that the “June Hack Scenic Memorial Train Ride” around the Southwest Slopes of Pikes Peak will come into being.  The “DREAM” is just too good of an idea to go away.  Someday a person or persons with Foresight and Vision (and lots of money) will make the “Dream” a reality.  It will provide jobs, boost the local economy and make it possible for millions of people to see and enjoy a beautiful part of Colorado.
"Memories of Margaret & Henry C. "June" Hack" (submitted March 2020) by Charles (Chuck) Spray (Nephew, also known as Jeep Hack). ©

​Click below for companion stories by Chuck Spray (AKA Jeep Hack):
ABOUT THE AUTHOR
To discover why Charles Norman Spray was also known as Jeep Hack by his family and friends while growing up in Victor,  click this highlighted link to his "Recollections of Life in Victor During the Great Depression, World War II and After".
​     Charles (Chuck) Spray  included this preface titled “ THE WHY OF IT ” with his more personal memoirs submitted in December 2019.  My daughter who was always telling me “Dad, write down some of the stories you are always telling me.”  But I’d continue to procrastinate.  Finally, to appease her I started writing.  The more I continued to write, the more that came to light.  Sometimes I’d worry about how to start and just how or what I wanted to say.  Then I’d remember what that renowned writer of western tales Louis L’Amour once said.  “Don’t wait for an idea.  Don’t wait. Just Write”!  He also was to have said another verbal truth, “You have to turn on the faucet before the water starts to flow”!  “Just Write”.
Bear with me.  I hope you have the time or inclination to put up with the ramblings and recollections of a world weary old man.  Perhaps in the telling I’ve stirred up a few recollections you might have of your own life.  Put them down.  Don’t wait.  Write them down for your grandchildren and their grandchildren to follow.  The children of today need to know that some things weren’t always the way they are today--things that will never be in the history books nor be taught in the schools, things that made up your life.  It’s important they know of the world you knew, what took place before I-Pods, texting, and the abuse of one of man’s greatest inventions, television.
Please forgive my grammar, spelling, punctuation and over-all abuse of the English language.  The Cherokee people have no word in their language for goodbye, so I’ll just say “Happy Trails” until we meet again.
Chuck Spray
THE PAST MATTERS.  PASS IT ALONG.
The Next Generation Will Only Inherit What We Choose to Save and Make Accessible.